With the passing of week nine of our Summer Fantasy Movie League we have just four weeks left in the season.

And four weeks isn’t a lot of time to make up ground, especially since this past week might have been the last big week of the summer.

Fast & Furious presents: Hobbs & Shaw was supposed bring balance to the box office or something… anyway, somebody said it was good for $90 million over the three day weekend.

Instead, it delivered $60 million which, admittedly was what the studio initially forecast, so I guess that means it only missed some expectations.  Maybe?  By Thursday morning people were dialing back on that $90 million number, but $75 million was still being floated.

All of which means that if you went in hard on Hobbs & Shaw you probably didn’t have a good week.  The ultimate commitment to the brand was to take advantage of the lack of empty screen penalty we have this season and anchor on two screens of the Friday showing.

I played with that sort of lineup during the week.  But as estimates started to soften I decided to go for a what seemed like a safer lineup.

When the Saturday estimates came it, it looked like safety paid off, an outlook that did not change with the Sunday estimates.

And, with the final numbers in, the scores for the week looked like this:

I went from last place of those who picked last week to first place this week.  My lineup was 3x Hollywood, 1x Toy Story 4, 1x Yesterday, and 3x Secret Life of Pets 2.  The twist was that in last week’s post I declared that SLOP2 was going to be the worst performer, so I went with it for the $2 million per screen bonus.  Instead, it was the best performer.  Same bonus, but a bit more money on my score.

Grannanj was in second anchoring on The Lion King and Saturday Hobbs & Shaw, boosted by five screens of The Avengers: End Game, which did get the worst performer bonus.  That was worth an extra $10 million in that lineup.

Empty screens started at 6th place and hit heaviest with SynCaine, Po, and Hamster, who all anchored on two screens of Friday Hobbs & Shaw.

Goat did not pick this week.

Winning the week opened my lead a little bit more.  Cyanbane had the biggest change in the lineup, jumping ahead in the race for third place.

Inertia keeps the alternate scoring from changing radically, keeping Goat mid-pack even after several weeks of not picking.  Still, it does seem to be lining up with the overall scores more so.

Which leads up into week ten with this lineup:

That represents a big change in the options.  Even with Hobbs & Shaw collapsing down to a single pick, three titles were knocked off the list as well, Stuber, The Secret Life of Pets 2, and the long running Avengers: Endgame.  That means there are five new films hitting this week.

First up is a big screen adaptation of the children’s program Dora the Explorer.  I am kind of surprised, given the emphasis on Spanish the series has, that they didn’t go with “El Dorado.”   Maybe they were afraid I would roll up blasting that song on the Repo Man sound track or something.  Whatever.

Dora the Explorer, live action or not, is clearly a kids movie in a market where The Lion King and Toy Story 4 are still holding out in most multiplexes.  The long range forecast has the film at $28 million, which seems a bit generous, but would make it the biggest of the new releases this week.  That will still put it solidly behind Hobbs & Shaw unless it drops off more than 50% from last week.

Next up is Scary Stories to Tell in the Dark, another adaptation, this time from a children’s book series.  As noted, kids movies are packed in right now, though this is rated PG-13 so it isn’t really a kids movie.  But is it enough of a horror movie to draw in that crowd?  It is a bit of a wild card to my mind.  The long range forecast for it stands at $11 million for the weekend.  Is that too tepid?

Then there is The Kictchen, which I had to go look up, but realized I had seen a trailer for it.  The name just did not stick.  This is a crime drama set in New York’s Hell’s Kitchen about the wives of mobsters who have to take over while their husbands are in jail.

The film has some names to support it, with Melissa McCarthy, Tiffany Haddish, esteemed character actress Margo Martindal, and that woman from The Handmaid’s Tale in thecredits.  But expectations seem modest.  I also think there might be some confusion here.  I am not saying that Melissa McCarthy cannot do serious work, but she is so associated with comedy that I think you might need to emphasize “comedy/not comedy” if she is your headliner.  The long range forecast last had it at $11.5 million, but FML priced it well behind Scary Stories to Tell in the Dark, so govern yourself accordingly.

The Art of Racing in the Rain is the one new film this week that I have seen some traction from.  It is a Disney film, so the marketing budget is there I guess.  My recollections are mostly of a scene or a man driving in a red sports car with his dog and a race track where it is raining.  I didn’t really get that the main character in the film is the dog, voiced by Kevin Costner.  I guess that is why We Rate Dogs was all over this on Twitter.  The long range forecast puts it at around $8 million.  I guess a strong dog lover demographic could make this a wild card, at least if they know it is about the dog.  I didn’t.

And the last new film on the list is Brian Banks, the tale of an NFL football player of the same name who was falsely accused of rape, pled guilty to avoid a long prison sentence, and was later exonerated.  On the plus side, there is a strong story about how the criminal justice system uses its weight to extract guilty pleas from the innocent.  On the down side, I am not sure “false rape accusation” or “man beats rape charge” is going to play well in a world where Jeffery Epstein and Harvey Weinstein are in the news.  There is no long range forecast, but where it is priced I would be surprised if it managed to get past $2 million.

As it tends to be, here on Monday evening when I am writing this, the safe move seems to be a lineup like 2x Hobbs & Shaw, 1x Toy Story 4, and 5x Annabelle Comes Home.  The anchor does all the heavy lifting.

But if the feel good doggie film breaks out even a bit, say making it to $10 million, which it could do in the estimated 2,800 theaters it is supposed to launch in, then a lineup of 7x The Art of Racing in the Rain and 1x whatever fits in that last screen is hard to pass up.  But is that me just wish casting or can We Rate Dogs push this pic into best performer territory?  With a low review score so far, who can tell?

Whatever you plan to go with, get your picks in soon.  The league locks tomorrow evening.

Next week we face the wrath of Angry Birds Movie 2, indicating that the high days of summer are gone and that we’re just marking time as Labor Day approaches.

It has been a while since we heard about anything besides EVE Online out of CCP, but they appear to be still working on other titles.  Today CCP announced the sign up for the EVE Echoes alpha. 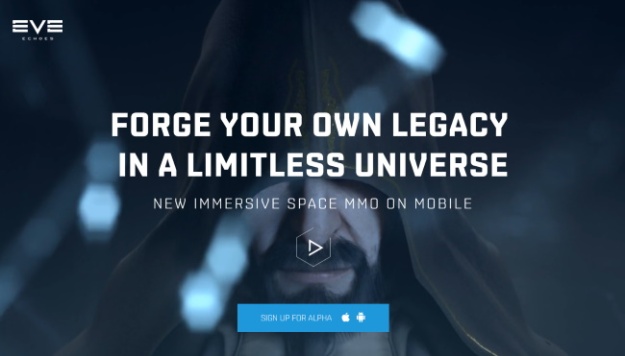 First show to us somewhat by accident as part of the Apple ARKkit 2 at WWDC as EVE: Project Galaxy, the game was  formally unveiled last year as EVE Echoes.

EVE Echoes is the latest iteration of CCP’s attempt to create a mobile game based on the EVE Online universe and is being created in conjunction with NetEase, the company also working with Blizzard on the missing-since-BlizzCon title Diablo Immortal.

CCP previously demoed an EVE Online based mobile game made in conjunction with PlayRaven (now a subsidiary of Rovio of Angry Birds fame) at EVE Vegas a couple of years back under the name Project Aurora.  This was alleged to have become EVE: War of Ascension, but we haven’t heard much about it since. (Googling the title seems to suggest it was released for iOS and Andriod in some regions, but I couldn’t say for sure.  It does not appear on the CCP site anywhere.  Maybe the Rovio acquisition complicated things.)

Anyway, if a mobile version of the EVE Online experience appeals to you, you can sign up for the Alpha at the EVE Echoes site.

Being invited to the Alpha will mean keeping things quiet according to the sign up. 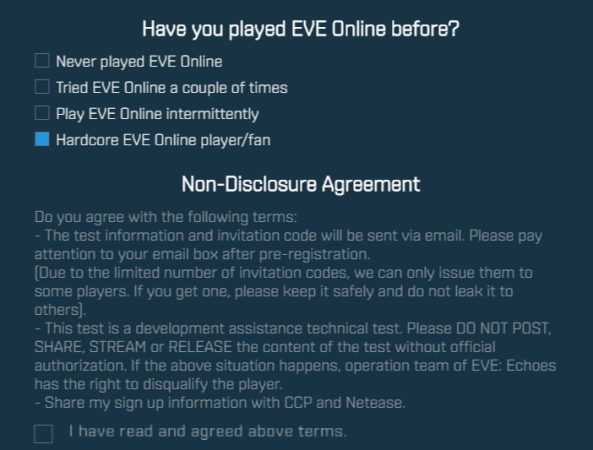 How hard core is hardcore?

So if you’re doing this for a blog post or stream event, you might have to sit on your hands for a bit.  CCP will want to let the gaming news sites have first bite at the publicity before the plebes can start gushing and/or complaining about the new game.