The next step on the march to WoW Classic kicked off earlier with the opening of name reservations. 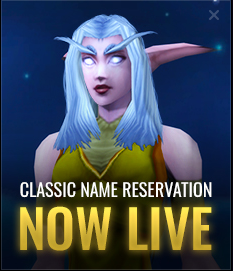 Blizzard has a long article about how to get yourself setup so you can log in and create up to three characters in order to hold names.

As it so happened, the whole thing opened up at just about the time I got home from work, so I was quickly to my computer to see if I could grab the name “Wilhelm.”  I rarely am ever able to get that.

I got the launcher going, which needed to download a small update for WoW Classic, after which I was able to log in and see the server choices, which lined up with what I posted last week. 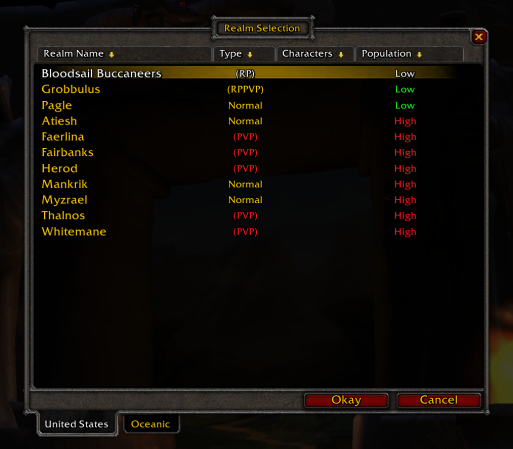 At the server selection page

Skronk and Ula were also online and ready to go fishing for names.  Our plan was to roll up on Bloodsail Buccaneers, an idea reinforced by the fact that it showed as low population when the list came up.

However, things did not go as smoothly as one might have hoped.  While the world servers were up, logging into them was another thing altogether.  I took a few runs at BB that all ended up with the same error.

I began to wonder if this was another form of load test, seeing if the login and world servers could work smoothly as people tried to pile in to grab names.  If it was going badly I half expected Blizz to announce additional servers in a couple of days.  Heck, I wouldn’t bet against that even now.

On Discord we started talking about backup options, but other servers were not responding for me either.  Then Ula got into Mankirk, but her name there was taken.

We took a run at Pagle, where she got here name but I was thwarted trying to get Wilhelm.  It had been scooped up already.  But I had backup names I am fine with… I have to be fine with other names since I so rarely get that one… and Pagle seems like a possible landing spot for the group.

Then, in trying servers again I managed to get into Bloodsail Buccaneers.  I immediately created a paladin and tried once more for the name Wilhelm… and I got it.  Ula got her name as well.  We were quickly back to our original plan.  BB would be our server of choice.  I put in a reservation for a hunter name as well and was set. 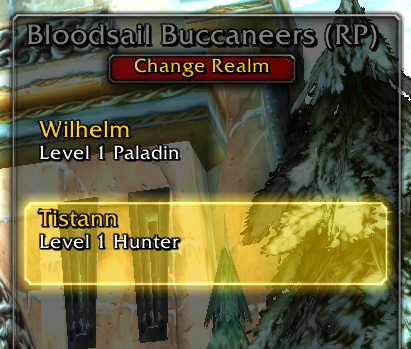 Not everybody was having as much luck as I was.  Streamer Asmogold, who has been getting throngs watching his streams of the WoW Classic beta, showed up only to find his name had been taken.

Somebody got there first…

But I was taken care of.

All I could have wished for at that moment was that the “Enter World” button was active so we could get started on this new venture.  But mousing over just told me how long I was going to have to wait.

I’ll be counting the hours… by tens at first probably

Oh well.  We still have plans to make.  If the historical record (read: the blog) is correct, it has been been almost 4.5 years since we last ran a dungeon together.  Some research and work ups might be in order.

Other posts about name reservations readiness: