CCP announced in the forums today that with the September update they are planning two changes when it comes to cynosural fields, the ship mounted beacons that act as jump targets for capital ships.  The announcement in full:

This September we are planning two large changes for Cynosural Fields:

During this era of chaos we are eager to introduce new challenges for veteran pilots while working towards a deeper and more balanced capital meta. Historically, cynos have been extremely flexible. They can be used on flocks of alts at nearly no risk or used by the largest and strongest ships in the game. With few options for cyno disruption, capital response time and power has grown to the point that it’s oppressing activity. This change will make it more complex and demanding to get capitals to the field quickly and give more strategic options for those wishing to disrupt capital response.

While most of the impact from this change is on combat, we are sensitive to the effect on Jump Freighters and logistics overall. Jump Freighters will be allowed to use Covert Cynos which can be activated by cheaper hulls like Covert Ops Frigates. This may need further attention and we will be watching this area very closely.

As clarified in a follow up post, that means that only the following ships can fit a cyno:

If CCP carries through on this, the days of the cyno alt in a small, sacrificial ship will be over. 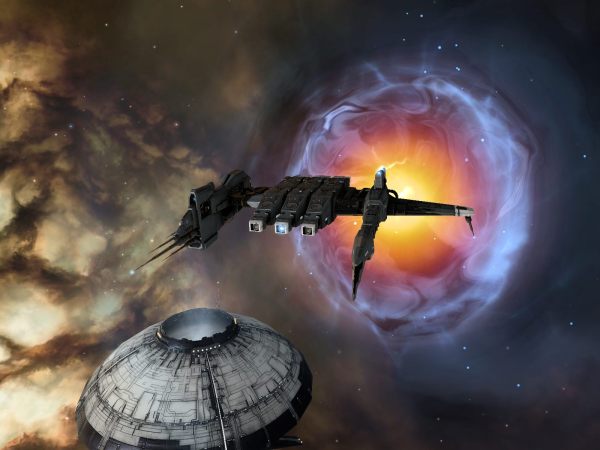 No more cyno on a Kestral

My hot take on this is that Malcanis will prevail yet again and the rich will get richer while the poor will be left out.  Is that that goal?

A large null sec organization that can afford to throw away expensive hulls for cynos or organize protection for their cyno beacons will carry on as before.  Coalition capital moves ops won’t change and you will still get dropped on by a bunch of titans if you come to Delve.  You’ll just get a better kill mail if you manage to pop the cyno ship.

However, if you are trying to get your own capital ship moved around New Eden, welcome to the new expensive reality.  You can only light a cyno in low and null sec, where their presence on the overview system-wide makes them an easy to find target, stuck in place for 10 minutes.  The only reason not to bother is that a rookie ship doesn’t get you a kill mark.

But if suddenly every cyno has an expensive kill mail attached, people will be racing to pop them.  I just did a multi-cyno trip across low sec to get a suicide dread in place a few weeks back.  It cost me a bunch of fuel and a Kestrel.  Would I do the same if I knew I was going to have to sacrifice a nearly 300 million ISK Falcon, the current cheapest of all the hulls listed according to EVE Appraisal, for each jump?  Probably not.  That would have cost me almost as much as the dreadnought itself.

And when people are burning a Falcon for every cyno, expect that price to go up.

I know that CCP wants to shake up the meta, but this feels like it will have the same result that so many past changes have, where an effort to make the larger groups hurt only ends up locking out the small time operator.  I suppose at least they had a thought for the jump freighter pilots, who will now only have to burn a covert ops frigate for each jump.  Expect shipping prices to go up some as well.

This change isn’t coming until September and at times CCP does listen to feedback.  We shall see if this is the chaos they want.  I am sure there will be lots of… ahem… discussion about this proposed change.  The forum thread about this is already alight, as is the main thread on Reddit.

Others writing about this:

Week ten of our Summer Fantasy Movie League left me more than a bit surprised.

I had stated that last week, with the Hobbs & Shaw premier, that we might be past any “big weeks” that people could use to catch up, and then Scary Stories to Tell in the Dark went nuts.

I write these posts on Monday night when the data available is usually just the long range forecast from the previous week.  That and how FML prices things are about all I have to go when it comes to sizing things up.  Last week the the LRF had Dora way ahead of Scary Stories, and the FML pricing, which not as absolute, was still heavily tilted towards the young explorer.

But by the time Thursday rolled around and I needed to finalize my pick, Dora seemed on the outs while some watchers were saying that Scary Stories might get somewhere beyond $15 million.

At that moment I was still contemplating the doggies story The Art of Racing in the Rain.  I had gone with 7x screens of that for my Monday night pick.  But for the final I suddenly felt that Scary Stories was the better anchor.  So my Thursday afternoon final pick was 4x Scary Stories, 2x Toy story 4, 1x Aladdin, and 1x Annabelle Comes Home.

Come Friday morning when the last leagues locked and picks were visible to all, I knew I had made the right choice.  All of the top players in the FML league were anchored on Scary Stories.

The perfect pick, which was unique to our league rule set once again, was 4x Scary Stories, 1x Hollywood, and 3x empty, which was worth just over $103 million with the $5 million perfect pick bonus.  Nobody went that route, but Bhagpuss got fairly close, taking the week.

There is an obvious gap in lineups.  Those of us who went in with 4x Scary Stories cashed it with around $100 million.  Everybody else who picked was in the $50 million range.  Even my 7x The Art of Racing in the Rain Monday night pick ran in that range, good for $59 million.  The doggie movie hit its $8 million mark right on the nose.

Po had the worst lineup of those who picked as The Kitchen under performed badly, falling behind the doggo movie.  Po was at least saved a bit by the $2 million per screen worst performer bonus, which was good for $10 million as he anchored on five screens of it.

Scary Stories breaking out and coming in second overall in the box office despite being 4th place in price skewed the week pretty badly.  So I was wrong last week, another big win was possible.  That can always happen when FML prices badly I guess, all of which left the overall scores looking like this.

At this point I look fairly secure in first and Bhagpuss in second.  Barring any sort of huge break-out box office… like Scary Stories again… it will be tough to assail either of us.  There does still look to be a reasonable fight for third place though.

With the alternate scoring I am still well within range of at least the next four people if I pick badly.  Given that there are only nine of us picking regularly, the lowest point value anybody will get will be 2 points, which means if I pick very badly my score could be as low as 82 at the end of the final week.  Bhagpuss, Cyanbane, and Miniature could all theoretically pass me, while SynCaine could tie that score.  So I had best pick well.

All of which leads us to week eleven and the choices we all have.

Five titles got bumped from the lineup this week, with Brian Banks, Yesterday, Crawl, Aladdin, and Annabelle Comes Home all exiting.

Replacing those are five new films, none of which really strike a cord with me.

47 Meters Down: Uncaged is a sequel to the 2017 summer film that involved people stuck in a shark cage under water.  The original was notable for making a lot of money relative to its small budget, so we got a second entry.  This time around people are scuba diving in ocean caves and discover sharks, after which the whole survival/horror aspect no doubt kicks in.

The long range forecast is a modest $13 million.

Next up is The Angry Birds Movie 2, another sequel to another film from summers past.  The original was surprisingly successful, which means we get round two.  The long range forecast for the weekend was $17 million when last I checked, which might make you wonder why FML has it priced a dollar less than 47 Meters Down: Uncaged.  So there is clearly something in play here.

About $30 down the price list is Good Boys, a comedy about the simple plans of 12 year old boys going wildly wrong.  It has good reviews on Rotten Tomatoes so far and the long range forecast puts it at around $13 million, which given the pricing here, seems to indicate that FML thinks 47 Meters Down: Uncaged is going to do better than its LRF.

Further down the list is Blinded by the Light, which I am just going to copy the description for:

Javed (Viveik Kalra) is a British teen of Pakistani descent, growing up in the town of Luton, England, in 1987. Amidst the racial and economic turmoil of the times, he writes poetry as a means to escape the intolerance of his hometown and the inflexibility of his traditional father. But when a classmate introduces him to the music of “The Boss”, Javed sees parallels to his working-class life in Springsteen’s powerful lyrics. As Javed discovers a cathartic outlet for his own pent-up dreams, he also begins to find the courage to express himself in his own unique voice.

It is tagged as “coming of age comedy drama.”  The LRF puts it at about $5.5 million.

And last on the new list is Where’d You Go, Bernadette, a “mystery comedy drama” based on a book of the same name with some reasonably big names in the cast.  The long range forecast puts it at $6 million, but you will note that FML priced it below Blinded by the Light.

This sort of chaotic pricing compared to forecasts means that there is opportunity… if you have some insight into what might exceed expectations and what might fall short.  Clearly the LRF isn’t to be believed, not after how often it has been wrong this season.  You can’t even trust it to be wrong in the right direction.  While it has over-estimated a lot of films, there were a few critical under-estimations too.

My own Monday evening plan was to be conservative.  The line up for that, 3x Hobbs & Shaw, 5x Hollywood.  I’m sticking with that unless I get some insight into the new titles.

Only two weeks left after this.  Get your picks in soon.  Next week features… *checks notes*… Angel has Fallen.  I’m going to have to read up on that one, as I have no clue from just the title.