Back in March we had the first EVE Aether Wars tech demo when CCP and Hadean got together during GDC to try and get a bunch of players into one big space battle and maybe set a world record.

Things learned from that went into round two, which went off yesterday.

For the second run the event grew somewhat in sophistication.  Previously players just logged in, were given a ship, and spent their time spewing missiles at each other.  This time there was an objective beyond explosions. 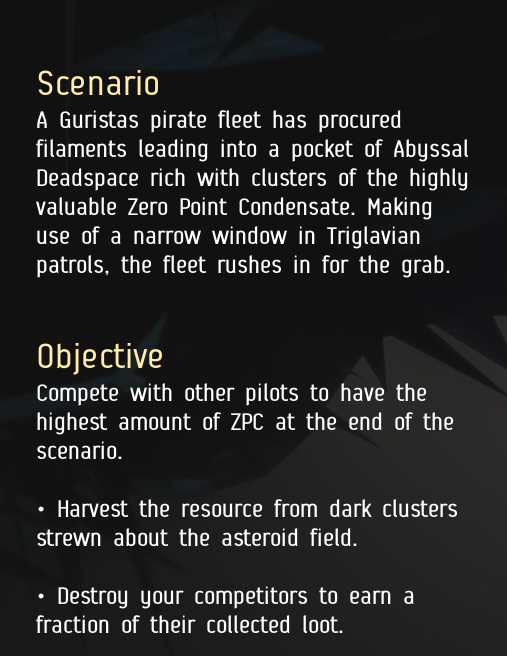 We were also given a selection of ship types this time around as well.  There was the Worm frigate: 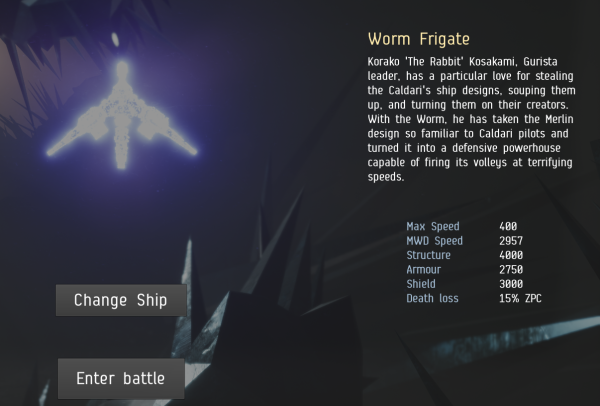 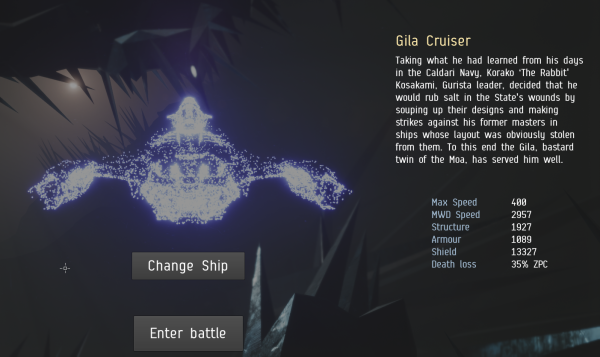 And the Rattlesnake battleship: 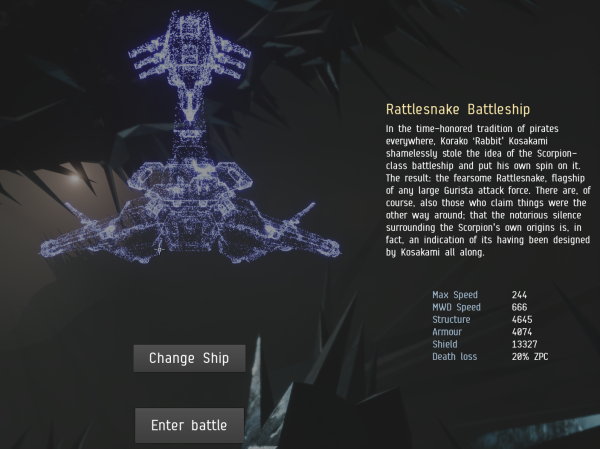 In EVE Online all three of these hulls are focused on drone combat, but in the tech demo things were more simple.  As the control scheme shows, the combat was much more dogfight oriented than the EVE Online “lock and shoot” method.

The control scheme for the event

One thing missing from the controls was the fire button.  Unlike last time, where much time was spent pounding a button to spew missiles.  I only noticed that once had locked some people up that there was no way to shoot. Early in the fight

I quickly figured out that the your ship fired automatically, launching missiles at a fixed rate.  They appears on screen marked with red triangles.

It took me longer to figure out where to find the zero point condensate, or ZPC, which was the scoring focus of the event.  I flew around for quite a bit before spotting a black cloud in space.  That a bunch of people were flying around it was the give-away. Go to the cloud to harvest

I flew into the melee to collect some ZPC.  As it turned out, despite what the ship descriptions said, if you were blown up you lost your whole cargo load, so when I went boom I came back empty.

I tried the different ships.  The Rattlesnake was a popular hull, I saw a lot of them.  However, despite having a lot of hit points it was also slow and something of a missile magnet, being easy to spot and close in on with smaller ships. Out with the Rattle

The Gila was better, and probably the best compromise.  But I ended up favoring the Worm just to be able to zip in and out of places and to chase down targets.  At one point I spotted a Gila glowing with a golden aura.  Figuring that was a sign, I went after it and, after a long chance blew it up.  The golden highlight was a sign that they were carrying a bunch of ZPC, so I went from zero to 31K pretty quickly. I did figure out that you could exit the game and come back in a fresh ship if you were in need of repairs without losing your ZPC.  However, I wasn’t going to play it safe and hide with my little stash and went looking for more golden tinted ships.  Unfortunately I was also likely highlighted with a golden tone, though it did not show at my end, so quickly became a target as well, losing all my ZPC.  Easy come, easy go.

One of the goals, as with the last event, was to try and set a Guinness Books world record, which would have required them to get somewhere around 10K people into the battle.  Mid way through the test they announced that there were over 3,000 of us battling. Over 3K battling they said

At that point they were going to load up some AI ships in order to push the load levels.

Send in the clones

Once again, they fell far short of a record.

The summary from Hadean at the end put the total just under 3K players involved.  Still, with us and the AI they said they got new data to evaluate from the test, which was the point of it all.

Unlike last time, it wasn’t obvious to me when they added AI pilots to the event.  People were able to spread out in the dark Abyssal Deadspace environment chosen for the battle. That dead Leviathan was just scenery

The event wrapped rather promptly an hour after the announced start.  At the client end this wasn’t immediately apparent as the server going down didn’t kick people out.  You just ended up flying around in space by yourself.

The final scores showed some people managed to scoop up a lot more ZPC than I ever managed. 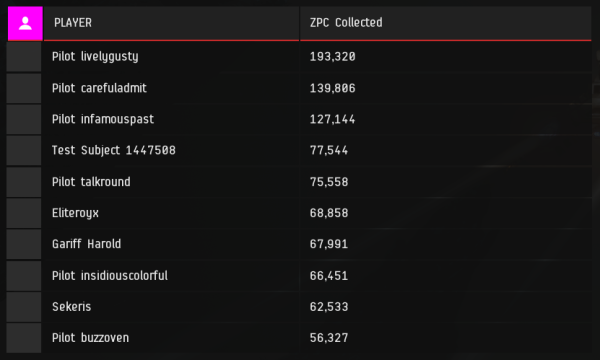 Who got the ZPC?

As for how the whole thing ran, it did not seem to tax my system very much.  But the whole thing seemed designed to keep from doing so.  Unlike the missile spam of the last attempt, which dragged down the frame rate on my system, there were never more than a couple dozen ships or missiles on my screen at any time.  Maybe we were all too spread out or maybe the client was set to only draw so many objects before stopping.

Communication was also spotty.  You had to be on the Discord for the event to know what was going on, and even then there were times when they should have mentioned things in the Announcements channel rather than dumping info into the public channel where it often scrolled off quickly.

Overall, from my side, it was a Sunday morning distraction.  There wasn’t a lot to it, though it was built as a test not a game, so that is to be expected.

CCP promised us prizes, but I haven’t seen any follow up on that.  Everybody who joined in is supposed to get some SKINs for the effort and somebody is supposed to win a paid trip to this year’s EVE Vegas.  I’m sure we’ll hear about that soon, as EVE Vegas is just over two months away.

Addendum:  Hadean released an infographic for the event.