It seems like it has been more than a week since WoW Classic has been live, but here we are just past the seven day mark since opening night.

Classic is as classic does

Crazy queues welcomed people the launch, and even Blizz had to know they were in for a rough time when the name reservation land rush kicked off and servers filled up.  They started with just 25 servers, 13 US/Oceanic and 12 EU, but started slowly adding servers to the list.  And then the launch hit and I saw an estimate that at one point there were more than 200K people queued up to get into the game.

And even that wasn’t enough.

Blizzard made a change before the weekend that doubled the number of players that could be on a realm, basically punting on their careful plan, detailed in the Reddit AMA, to keep populations down to a point where the layering tech would stop being needed and we would all be in a single layer.  That cleared things up on our server, but still there were queues over the weekend, some close to 10K deep for some servers. 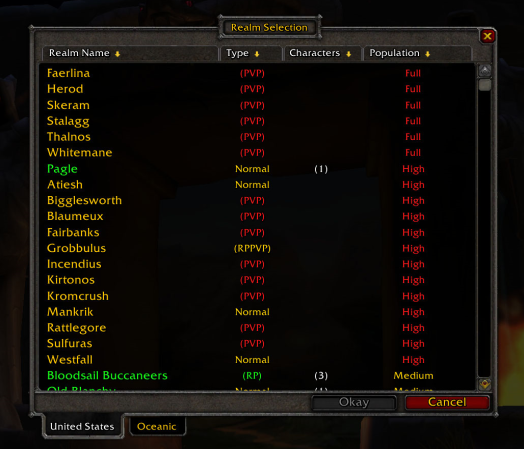 Probably for the best.  I am sure some purist will be spitting mad about layering and server populations being beyond a certain size, like they could know 10K people personally, but 20K is just too much, but I imagine that for most people it will mostly go unnoticed… save for the reduced queues.

In the game a gnome named Jokerd made to level 60 in three days and seven hours, the first player to do so.  That was well past my 48 hour estimate.  I assume people will race faster than they actually can I guess.  And along with that Ragnaros and Onxyia have both been slain.  Serious progression raiders are going to raid early and often.

At the other end of the spectrum, the nostalgia tourists like our little guild have been pottering along at a much more leisurely pace.  I have at least kept myself to three characters, not letting my usual bout of alt-ism take control.  Not that I haven’t thought about it.

Right now my three are a dwarf hunter, a human paladin, and a night elf druid, allowing me to run through each of the three alliance new player areas.  Each are in the low teens, all past 12, which is probably a brisk pace compared to the way I went back in the day.

But that is the ongoing theme of these sorts of servers.  Unless you’re completely new to them, unless you have no history, you are going to come into them a lot more informed than you were the first time around.  Even a on a winding path where you dawdle over every point of interest, the pace will likely be quicker than when you were lost and trying to figure out what was going on.

Ula and Skronk have been on quite a bit as well, getting important tasks accomplished.

They have also been doing some of the alt thing.  When we formed the guild we had 16 names in it across the three of us.  Earl, who is about to move half way around the world, got on with us over the weekend and started his character, but Bung and his son were away over the holiday weekend.  So we haven’t quite got things together for an attempt at Deadmines or Ragefire Chasm yet.

Still we found some time to group up and at least get used to working together again.  Wilhelm got through Elwyn Forest, killed Hogger, and had the quest that opens up Westfall, at which point I took the tram to Ironforge and ran out to Loch Modan to join up with Skronk and Ula.

There we teamed up in some zones that got us working together.  First up was the quests with the troggs that you get from the first tower in Loch Modan.  It is a deceptively simple pair of tasks, kill some specific troggs and collect some of their teeth, because we’re going out in the world now so we’re going all Deer Hunter and taking trophies and the like.

The thing with the troggs, and zone design in early WoW, is that placement and spawning can be… deceptive.  You trot into the valley where the troggs live and a bunch of other people are slaying them so you run further in and maybe find one hanging about and the the wave of respawns start sweeping over the zone and suddenly you find yourself cut off from the zone exit with a few more troggs on you than you might have expected.  If you’re solo, it might be time to run for the exit, but we were there in a trio of priest, mage, and paladin, so we stood our ground and practiced actually working as a group.

And it worked.  Wil was swinging a 2h club rather than wearing a shield, and had yet to get a taunt skill, which made things awkward at times, but we persisted through as we watched other people flee past as they found themselves neck deep in troggs.

The trogg valley wasn’t too bad.  It is wide open for the most part, so you can find a spot to sit and have a drink to restore mana before getting stuck in again.  While we had a couple of close calls when we waded in too deep, we got through it and finished off both quests.

We declined the next round of troggs, opting instead for the quest from Thelsamar to collect ears from kobold tunnelers.  We were very much in the heart of darkness then.  It was a busy night out and the kobold camps in the open were all heavily trafficked, so we decided to set up shop in Silver Stream Mine. 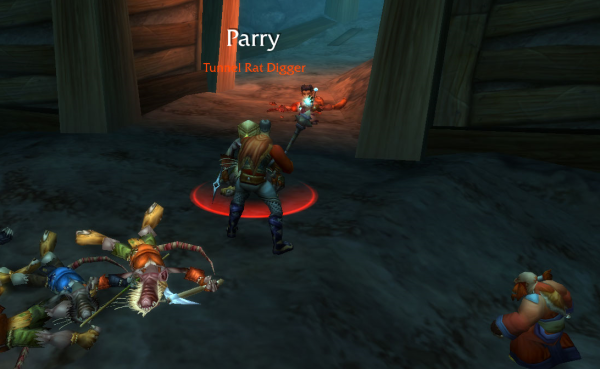 There we settled down into a side room to pick off spawns as they popped.

As Bhagpuss points out, there isn’t really a tradition of spawn camping in WoW the way there was in EverQuest.  The quest driven nature of WoW never led to the development of a set of social norms and rules of etiquette because people tend to just get their quest ticket punched and move on and because there isn’t the sort of discreet and obvious camp sites the way there were back in West Karana or The Commonlands back in the day.

Still, it did irk me a bit when we setup in a side room as a group only to have people run in and grab a spawn as it popped.  But there was plenty to go around and you just roll with it and throw them a buff because expecting them to know the social niceties from another world is asking way, way too much.  And it wasn’t happening too much.  We were also sitting in a room where some mining gear boxes would spawn, so most of the time people wandering through had a reason beyond spawn competition to be there, and it a kobold is sitting next to the boxes you want, of course you take it down.

When we were left to our own, it did end up being another round of good training as a group.  As with the valley of the trogg, the respawns seemed to come in waves not necessarily related to how quickly or slowly you took down the previous one.  We would get two spawning on top of us, then once we were engaged, two more would spawn and it would become a mad rush to take them down to limit their damage.  Ula got in some crowd control practice, sheeping a kobold when we were falling behind, while Skronk got to work on mana management for heals.

It all worked pretty well and we were just a couple ears shy of being done when we got hit by the big spawn.

It had been quiet for a couple minutes so I was out in the hallway, where I pulled a pair of kobolds.  As I was bringing them back Ula called out that two more had spawned, so we had four to deal with.  But we had done that a few times, no big deal.

Then two more spawned and were on us so it became a race to start knocking them down.  And then two more spawned and the wheels came off the wagon.  We did okay to start with, dispatching the first couple, though one managed to run off and I am pretty sure he brought back another friend.  But mana and potions and hit points were all being worn down.

Ula was the first to fall, then Skronk, both out of mana.  I was down to the last three and, while my hit points were dwindling, I managed to slay two of them.  But they had both been worn down.  The last one though, he had a full health bar while I was getting down to a sliver of health and was out of mana.  I went down swinging, but down I went.  Our first group wipe in WoW Classic.

When we got back and resurrected we had a field of corpses around us to loot with more than enough kobold ears to finish off the quest.

So that was our weekend workout in anticipation of doing dungeons at some point.  We just have to get the rest of the group together so we can try it for real.