Our Summer Fantasy Movie League has come to and end.  It is now time to tally up the final scores.

As these things sometimes go, the final week was a mild affair.  While we got a four day weekend for the 13th week, there were no big new titles for Labor Day.  That left us all piecing together lineups from 14 movies we had all worked with before, with one minor new title that showed up at the bottom of the pricing list.

As a holiday, the Labor Day weekend seemed to be looking longingly back at summer rather than forward towards the coming of autumn.  And nostalgia never pays off quite as well as the first big rush, so the week ended up with moderate scores.  In the question on which title to anchor on, Angel has Fallen or Good Boys, the answer for the perfect pick turned out to be two of each, with 4x Spider-man: Far From Home, the best performer of the week, rounding out the lineup.  That was good for a little past $90 million.  However, none of us went that route and the scores for the week ended up looking like this.

It was a conservative week and the only outlier was Po, who went all-in on The Overcomer in hopes of a big score.  That did not come to pass.

And with that, we have the final scores for the season.

I managed to hold of Bhagpuss and keep first place, with him falling just over $20 million behind.  If the season had gone one more week, things might have ended different.  The first week of the fall season sees the opening of It: Chapter Two, which is the sort of big week that can change the lineup.  SynCaine held onto a solid third place, running away from the pack that had been vying for the spot for several weeks running.

Then there is the alternate scoring, with the number of weeks won in parenthesis.

The top four remained the same in both scoring systems, after which things varied.  With a season where only 7-12 people were picking on any given week, being consistent and picking every week was enough to remain mid pack, while a couple of winning weeks could keep you in play.

And so it goes.  Thank you for playing another summer season.  As I noted, I will keep the league running, but won’t be posting about it on a weekly basis.  I might return for the winter (or awards) season.  There is a Star Wars movie coming along with a few other titles that might make things interesting.

I will say that I did like the rules variation.  The lack of penalty for empty screens and the $2 million bonus for the worst performer made for some interesting picks and I enjoyed seeing weeks where the perfect pick for the TAGN league was different from the standard league rules. 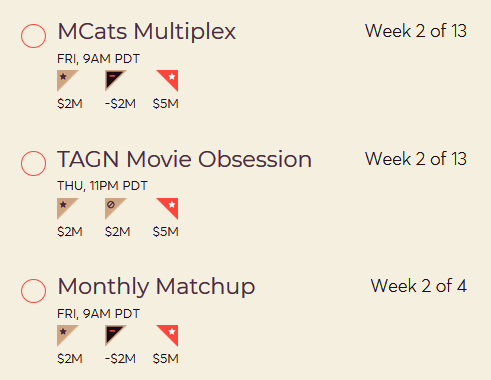 I just wish you could set the season duration.  I think a shorter season, maybe six weeks, might be more interesting.  At some point during the 13 week march an inevitability starts to set in as to who is in contention and who is out of the running.  But I get why FML might not want to have a bunch of out-of-sync leagues.  Maybe some day.

I did reset the deadline for picking to the 9am Pacific Time Friday standard for the league.

Thanks again for joining in!

In an attempt to alleviate the still problematic server queue issue with some realms, Blizzard announced in the forums that they will be allowing free server transfer from specific WoW Classic realms.

Classic is as classic does

The transfers will not only be FROM specific realms, but will players will also be limited in which realms they will be allowed to transfer TO.  This will include some fresh realms being spun up for just this purpose.  The single destination nature of the transfers (except for that French realm) should also keep guild mates from getting lost on the way somewhere.

The exact timing of the transfers has not been announced as yet.  Blizzard has said that the new realms on the list will not be open to new character creation for the first day to help ensure that those who are transferring will be able to retain their character names.  If you’re not transferring to a new realm, then you might be stuck in that regard.

Blizzard further reminds people that in order to transfer your character cannot:

Finally, Blizzard is prepping people for some delay when it comes to the transfers, which may take several hours to complete.  Also, if the destination realm fills up quickly, the transfer option may be turned off without prior notice.

Being too popular is a problem, but it is a better problem to have than not being popular enough.