For the last few years one of the key arguments to my mind in support of the idea of something like WoW Classic were the progression servers that SOE and the Daybreak rolled up for the EverQuest community over the years, starting back in 2007 with The Sleeper and The Combine.

There was a lot to be learned from even that first rough run, including the idea that it might be more popular than expected requiring the company to roll out another server.

After running lukewarm-to-cold on the whole special server idea during the SOE years, where they would launch with some fanfare and then never mention the servers again in any official capacity, Daybreak has turned the special server nostalgia thing into a part of their ongoing business plan.  When Holly Longdale says that EQ has more players in 2019 than it did in 2015, it is in part due to the cottage industry for Norrath nostalgia they have created.

So now Blizzard is in the nostalgia business with WoW Classic, and is clearly seeing some success from having done so.  But it is interesting to see the different paths Daybreak and Blizzard took to get to their respective positions, both in how the went after the idea and how their respective games evolved over time. 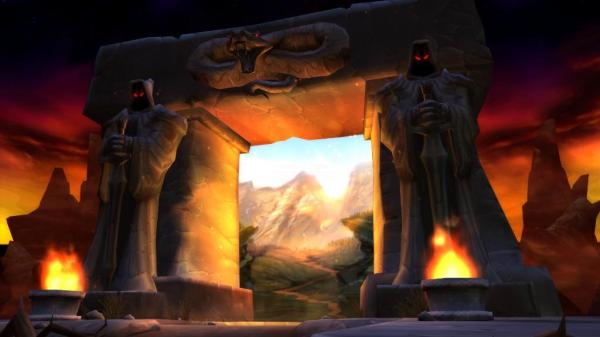 The idea for this post came via a comment from Bhagpuss on the post where we were having trouble finding a definitive answer on the functionality of meeting stones.  He noted that information about mechanics in WoW Classic were not as readily available as they were for Daybreak’s games.  While places like WoW Head have been able to recreate WoW Classic versions of their site with quests and locations pretty well covered, they are not quite complete as we discovered.

Meanwhile, if you start digging up stuff on EverQuest you will find old articles, often not updated for a decade or more, are pretty spot on, both for live and progression servers.

Part of this is, of course, due to how SOE and then Daybreak approached the nostalgia idea.  While Blizzard set out to recreate the 2006 experience running in its own version of the client, an EverQuest progression server runs on the same client as live and draws on the same assets and resources.

This was no doubt due to a few reasons, with a lack of resources being at the top.  Blizzard has the personnel and the budget to create something like WoW Classic while the EverQuest team hasn’t had that sort of opportunity since the early days, at which point it probably seemed like a silly thing to take on.  The team was cranking out two expansions a year for quite a stretch, and expansions made money and kept people subscribed.

There was also something of a lack of commitment to the nostalgia idea.  While I give SOE props for even getting into it back in 2007, just eight years after EverQuest launched, it wasn’t until well into the Daybreak era that the company really took the idea seriously, that resources were dedicated to make the nostalgia server idea a thing and address some of the problems that the fans had been complaining about since the first round of them.

But SOE and then Daybreak were able to get away with their half-assed approach to progression servers largely due to the way the game have developed and evolved over time.

The thing is, if you log into an EverQuest live server today you can wander around a lot of old zones that have remained pretty much untouched since they were launched.  The EQ team has released expansion after expansion, adding zone after zone, while never doing anything to really reform or consolidate the world.

Yes, there is the Plane of Knowledge, the travel hub of Norrath, and SOE updated a few old world zones like Freeport, but a lot of content was just left where it was dropped and rarely looked after again.  Somebody might add a new zone connection for another expansion, and a few places got a Tome of Knowledge added to get people to the Plane of Knowledge, but for the most part if you wander through old zones they look like they did back in the day.

And you can add to that the fact that the team didn’t go hog wild on revamping classes with every expansion.  If you roll up a warrior on a live server or a progression server, they still start with the same old skills from back whenever.  Spells got a bit of a revamp, losing the every five level aspect at some point, but otherwise you still get Spirit of the Wolf at about the same point you got it in 1999 or 2007 or 2011 or 2018.

In that environment where you haven’t really added a bunch of new stuff to the old zones, where classes are about the same now at level 1 though 20 or 50 as they were back in 1999, where content has been delivered in nice little stand-alone silos, a company can get away with a low effort, same client nostalgia experience.  Fippy Darkpaw is still running at the 1999 gates of Qeynos. delivering his line, over and over again.  So they can fiddle with some toggles about which zones you can access and play with the experience slider and call it a day.

Yes, there is Project 1999 and the purist attempt to really recreate every little detail of the original game. (They have a new server coming too.)  I admire the effort, but it does feel a bit like a niche of a niche, the desire to get back the entire experience.  Daybreak delivers about 80% of the experience already in a… I was going to wite “modern client” but let’s not be silly… supported client that gets updates on servers that get a lot of traffic.

Compare this with Blizzard’s lot.

The elephant in the room is the Cataclysm expansion, which redid the old content, updated the old world to allow flying, and added zones that adjoined to classic zones, and basically stirred the pot radically.  This is ground zero of the “missing old content” movement.

But that is only the most stark example of change.  Blizzard stirs the pot with every expansion.  Occasionally I see a call for “WoW 2.0″ and I laugh, because we’ve been there already.  The Burning Crusade was literally WoW 2.0, and while its changes were not as sweeping as Cataclysm, the game changed the day it dropped, as it did with Wrath of the Lich King and Mists of Panaria and so on and so forth.  And while Blizz gives us a new city to hang out in each expansion, it also pushed to keep us in Stormwind and Orgrimmar as well, with portals to ease getting back and the auction house to serve as a draw.

I have written about how the hunter in WoW Classic is so different that retail, but even the simple classes have seen change.  Compared to rolling a warrior in EverQuest today, rolling one in retail WoW is nothing like the 2004 or 2006 experience.  You go through different content with skills that work differently up a different skill path to unlock different talents on a different talent tree.

In that environment there is no cheap way out to create anything like a vanilla WoW experience.  You cannot half-ass an attempt to test the water, you cannot just roll out a new server with only the level 1-60 content unlocked, because that 1-60 looks different, plays different, and for the most part is different.

I think this is why, as Bhagpuss noted, that some info is just difficult to find about WoW Classic.  With Blizzard shaking up the game and every class with each expansion, there hasn’t been the sort of static, almost sedimentary, layers of development the way there was with EverQuest over the years.  Fifteen year old articles at Allakazam are still relevant because SOE and Daybreak laid down some content and moved on.  Blizz doesn’t play that way.  Blizz changes the whole world, touches most everything, in a regular ~24 month cycle.  There was no simple path back to vanilla because it was so well and thoroughly gone.

And so we got Blizzard pushing off the idea of vanilla WoW and things like J. Allen Brack’s now infamous line for at least a decade.  I was already referencing calls for “classic” Azeroth servers back in August 2009.  Private servers offering a vanilla experience were already pretty common seven years back when I dabbledwith the Emerald Dream server.  But for Blizzard to get there required such a commitment that it was only after retail kept sagging that they decided to play the nostalgia card.

I suppose the lesson to take out of this is to plan for nostalgia… at least if you think your game is going to run 15 or 20 years.