The current Reavers deployment has had some stretches of inactivity.  We were delayed deploying due to a hurricane (other than Hilmar) bearing down on Asher, then he was away on vacation for a bit.  My main and my alt had been logged out in hostile space for a while now, though since WoW Classic has been getting most of my attention, I wasn’t complaining.

But Asher got back and settled and it was time to log back in late last week.  We had something to do, so we dropped our mobile depots to refit and get rolling. Off with the cloak

The target picked was a simple one, another powered down POS sitting out in space.  Maybe somebody would come get us, alerted by our attack.  We formed up and flew out to the target system, M-MCP8 in Cache, only to find it somewhat more populated than expected.

The residents, Vindictive alliance, were out in force, with 50 or so appearing in local as we jumped into the system.  We had fewer than 30 ships in our fleet, but Asher figured we might get a fight so we warped on grid with the tower and started shooting.

As we slowly circled the tower, formed up and following Asher’s Legion, more people started piling into the system, and we saw local rise even further.  The newcomers appeared to be from Legacy coalition, with TEST making up the bulk of them in local.  Of course, with TEST in system, local began to come alive with chatter.  We kept on orbiting the tower, chipping away at it.

As it turned out, there was another operation going on parallel to ours.  A group from Legacy had been running ops into Vindictive space for a while now and had recently set the armor timer on an Astrahus in the system.

The timer was set to come out just a few minutes after we arrived.  So people were showing up to that party.

Our target was a remnant left behind by Dragon Empire, who now live up in Geminate, so were unlikely to run out to save an anchored by unfueled tower.  Likewise, nobody in system had anything to do with the tower, so no notifications were going to them.  They were content to focus on their own battle, ignoring the small fleet of Ishtars easily within dscan range, it being one of the smaller systems in the area.

A clump of Ishtars

The tower took a while.  Even a small faction tower has a lot of shield hit points, but we kept on flying around it, letting our drones to the work.  In local it sounded like things were not going well for the owners of the system.  There were recriminations and some mocking going on.  It seemed that the defense, a small Machariel fleet had been swept aside by Legacy Loki fleet.

At our end, we eventually cut through the shields and were able to get through the armor and structure layers rapidly.  Soon the tower blew up with a satisfying display. 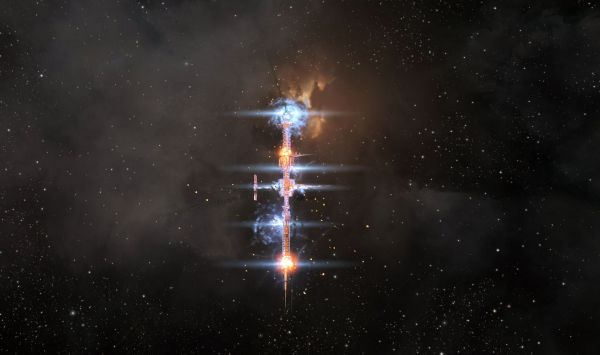 Brewing up, ready to burst

By that point the fight over the Astrahus had been resolved.  The final timer had been set and Legacy had finished spewing in local and headed home.  We too headed for the exit, our own small mission complete. 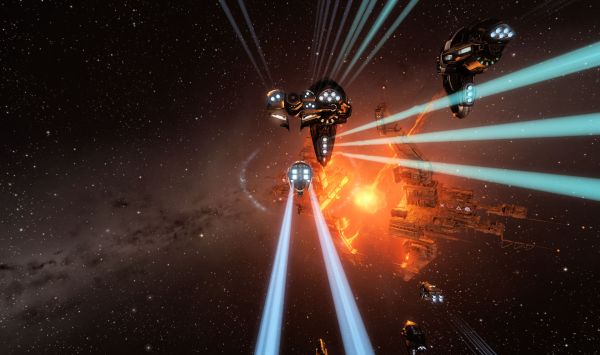 However, as we landed on the gate to P7-45V an Vindictive Machariel landed as well and jumped, no doubt hoping to get away ahead of us.  And his hope was not unwarranted.  Aggression timers were still live on some of the fleet.  I still had a few seconds remaining on my own timer as we saw him jump.  But the call went out to jump through and tackle him if we could.  We jumped as soon as we could… and it was just soon enough.  A bubble went up to keep him from warping off and we piled on.

Machariel getting ganked at the gate

He put on speed to get out of the bubble but had a web on him as well, so exploded well before he reached the edge.  The kill mail showed a modest fit for a Mach, and no implants in his pod, but a good solid kill.

Having already deployed around the gate with a bubble up, we hung around and camped the gate for a bit, and were rewarded with a few more kills and the locals attempted to move back and forth between the two systems.

We even got the Machariel pilot again trying to slip through in a Cormorant this time.

But such a gate camp is a temporary thing.  We were in the heart of their space and they were just standing down from a defense operation, so it seemed likely they could form up enough Machs to sends us running if they had the heart for it, so we moved on back to our own staging in their space, warping off to our safe spots to once again deploy out mobile depots, mount our cloaks, scoop the depots, and cloak up safely while out logoff timers ran down.

I am not sure how much heart Vindictive would have had though.  They withdrew from Winter Coalition the next day, no doubt due to the attention Legacy had been giving them.  We haven’t moved on yet though.  There were ops on over the weekend (which I missed) including another camp on that same gate which was fruitful yet again.  But it is possible we might pack up to hunt elsewhere soon.