SuperData Research has their digital revenue numbers out for September. 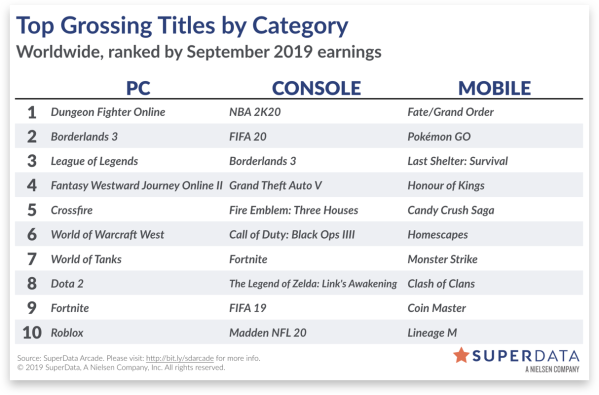 On the PC end of the chart September saw another disruption of what was the solid top five titles for a stretch.  The fourteen year old Dungeon Fighter Online held on to the top position.  SuperData even had a tidbit about it on Twitter this month.

Last month World of Warcraft, buoyed by the WoW Classic launch, jumped up into third place behind League of Legends.  This month the newly launched Borderlands 3 drove straight up into the second spot ahead of the now decade old LoL.

World of Warcraft fell down to sixth position, putting it ahead of World of Tanks and Dota 2.

Fortnite, which had been one of the top five regulars fell to ninth position.  Still, making the top ten means you’re still something.  Competitor PUBG isn’t on the list.  And in tenth place Roblox held on from last month.  Hearthstone, which had the ninth slot last month on a new expansion launch fell off the list for September.

In the console column new releases NBA 2K20, FIFA 20, and Borderlands 3 secured the top three slots.  Perennial member of the list, GTA V, grabbed the fourth spot.  Fortnite, which was in the top spot in August fell down to seventh for September.

And on the mobile end of the chart Fate/Grand Order, which has lingered on and off the list for a while jumped from third into first place.  That pushed Pokemon Go down into second place while perennial chart member Candy Crush Saga stayed in fifth position.

So it is time to compare those charts with NPD’s September sales ranking.  As always, NPD is US only, combines PC and console sales, and doesn’t always include digital sales.

Certainly the top three were expected, though it is interesting to see that with combined sales that Borderlands 3 landed in between NBA 2K20 and FIFA 20.  Nintendo fell off a bit.  Last month five of the ten titles on the list were for the Switch, indicating how much that platform still depends on physical sales.  This month only two Switch titles made the chart.

Gears 5 and Code Vein did not make the SuperData chart.  I knew about Gears 5, another entry in the Gears of War franchise, but I had to look up Code Vein.

NPD’s social impressions list had World of Warcraft at the top of the list, basking in that WoW Classic glow, followed by League of Legends, CS:GO, Fortnite, and GTA V.  Dota 2 dropped off the list from last month while CS:GO jumped in.

Other items from the SuperData report: