I do not imagine that the Stormwind Stockade is on anybody’s list of epic, memorable classic WoW instances.  It might even be one of the instances that was made better by the Cataclysm revamp.  At least it got Hogger as a boss then.

But there it is, in the middle of Stormwind, easy to get to and easy to run.  It was also right in our level range and about right for our level of commitment.  I was still ill and had family in town, so a short window of time on Saturday afternoon was about it for me.

Skronk and I got over to the Stockade early just to get quests and what not in order… and to listen to the NPCs talk about their troubles. 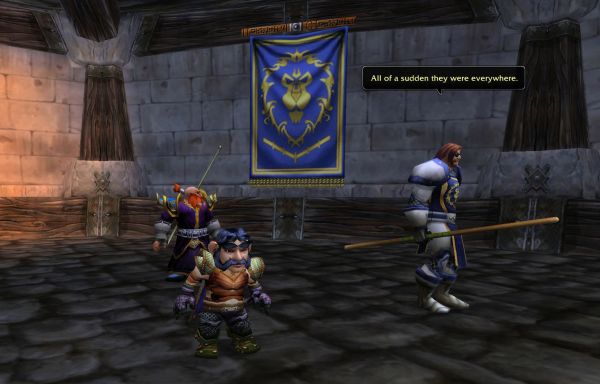 Sitting around there for a bit was another reminder of how much detail work Blizz put into the game.  The NPCs go on about the troubles in the Stockade and every once in a while a group of Defias prisoners surges out of the entrance to the dungeon to fight with the Stormwind guards.  You can jump in and help, but the guards subdue them in short order, then go back to moaning about their current situation.

The Stormwind Stockade is a small instance, but it does seem to try to make up for that with quests.  As we sat around waiting for people to get online and over to Stormwind, Skonk and I were able to put together five quests for the instance, and checking later, I was missing a sixth according to the list over at Icy Veins.  Somehow I didn’t get the one from the Wetlands. 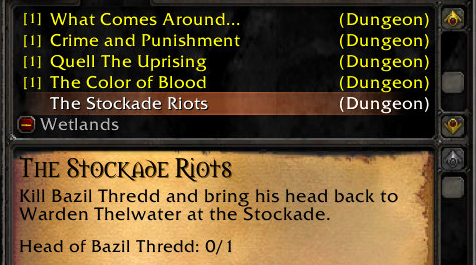 I think for the full run you need to walk out of the instance with three heads, a hand, ten bandanas, and a checked off shopping list of various prisoner types slain.

As everybody got online, we ended up with this as our group.

We formed up outside the instance, some potions were passed out, quests shared, and then we headed in. 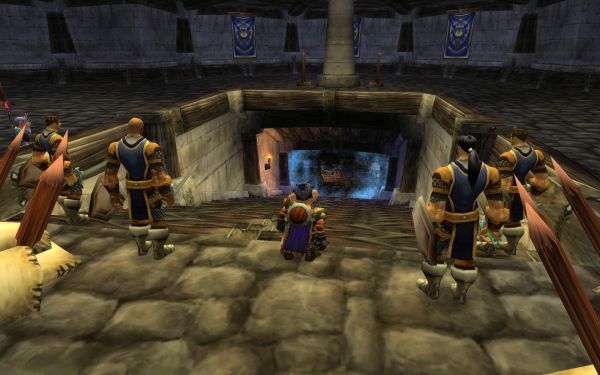 Looking into the Stockade

The challenge of the Stockade, such that there is, is mob management.  The instance is small, but fairly crowded with Defias prisoners, so it is easy for a pull to bring more mobs than you thought and accidentally pulling by proximity will happen if you are not careful.  The mobs also all run when they get low on hit points which can lead to more pulls if you’re not careful.

And, at the start of the instance, they can also run past the zone entrance far enough that you cannot loot them. 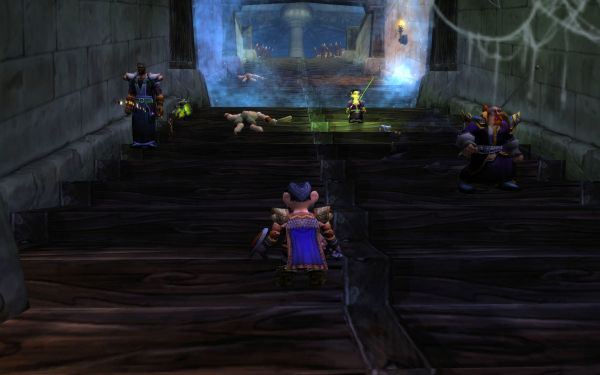 No Stockade run is complete without this situation

Other than that, the whole thing is a short north/south-ish corridor which is crossed by and east/west corridor, each with cells on either side and at the ends. 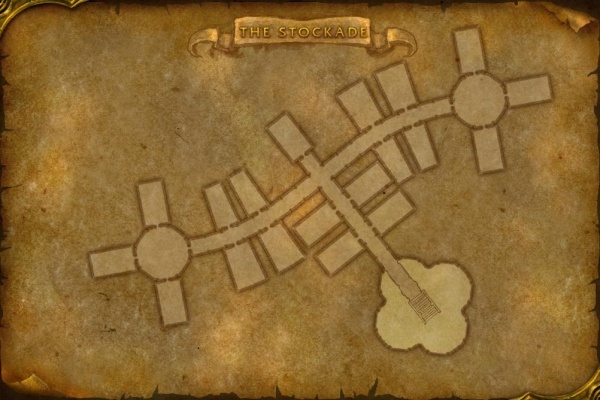 Map of the Stormwind Stockade

That map, which I swiped from the web, is from later in the life of the game, when instances got in-game maps, but before the Cataclysm rework, which put bosses on the maps, which I guess would make it from somewhere in the WotLK time frame.  Maybe?

Anyway, you move through the instance clearing the hallway, then each cell as you move past.  Each cell has three or four mobs. 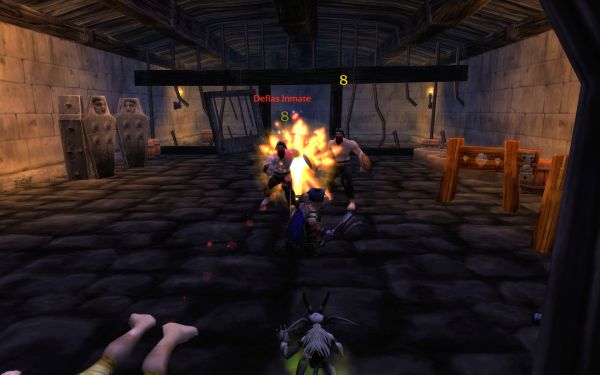 Fighting in one of the cells

The cells have their quirks.  At one point I ran up to the broken bars to proximity pull a Defias standing behind them, but he just sat there until I moved to the open door section in the middle.  Then he came to get me.  They may have wrecked their cage, but they remain locked up in their hearts I guess.

As for the bosses… they aren’t really bosses the way they are in other instances.  A couple of them show up in random cells along the way.  Down at the west end, where we headed first, we found Dextren Ward in the furthest west cell.  We cleared the the north and south cells first, mostly out of habit, then realized we had done it right because Ward’s special attack is to fear people, which sends you running into those rooms.  If you haven’t cleared them, it is all about the adds.

Down at the eastern end there was Hamhock, the ogre, and then Bazil Thredd, neither of whom were particularly tough.  They also drop no loot, no doubt because it would be way too easy to farm.  There is a rare spawn boss who does have a couple items, but we didn’t get him.  So we collected the various body parts, as each of the mobs were generously supplied with five heads or hands or whatever.  By that time we were also done with our shopping list of kills. 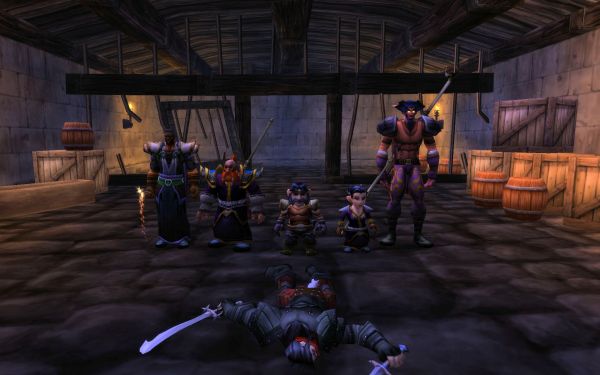 Group picture time… not even sure which boss now

The one thing we were not done with was bandanas.  Everybody in the group needed to collect ten, they drop off of maybe one in four Defias mobs, and unlike heads or limbs, no Defias line member ever seems to carry a backup bandana or three on their person.  So even when we had slain the last named mob we were well short on bandanas.

But the Stormwind Stockade provides.  Another oddity of the instance is that it respawns the trash mobs pretty quickly.  Before we were done with the west end of the long corridor Defias mobs had begun respawning around the entrance.  We had to clear a walker as we crossed to the east end, so when we were done there we just turned around and went back to clear the rapidly returning Defias to collect bandanas. 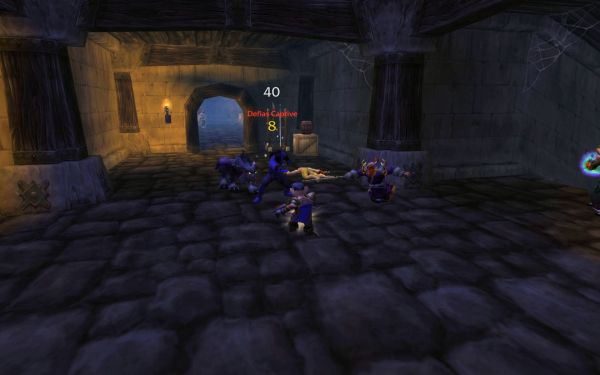 We had to carry on with this for a while, but eventually people started finishing up their collection.  As that happens others are more likely to get bandanas, so our full quota was reached pretty quickly once we were down to two people.

Ula once again did a video of some of our time in the Stormwind Stockade, so you can get a sense of what it is like in there.

The soundtrack is better on the video I think.  The video also shows one of the trials of being the tank, which is people hitting mobs other than the one you’re hitting.  You can see me turning around and taunting mobs off of people.  Fortunately the warrior taunt is very effective, so it isn’t a huge deal and gives me something else to do now and again.  We would be in trouble if I had gone with my pally tank idea though.

The video is also available over on Ula’s new blog, which you can follow to keep up to date on her video releases.

After that it was time to exit and begin the great turn-in of quests.  Most of them offered up just experience and a bit of silver as rewards.  Not that I mind a bit of silver.  My characters are all still pretty poor.  But The Stockade Riots quest is part of a chain which began with a drop at the end of the Deadmines which brings you around to the garden in the castle for an event that has you talking to a gnome named Tyrion and then slaying a pair of plotters. 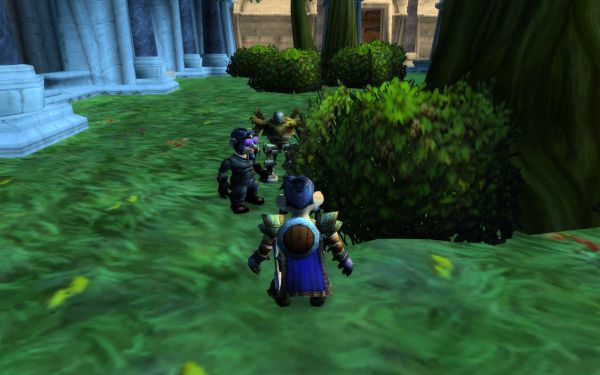 There is a bit of a hang up in this quest as Tyrion is required for two stages of the quest, and when he is involved with one you cannot turn in the other.  Skronk and Ula got hung up for a while waiting on this.  I came back later and was able to get some help from a stranger to finish it.  It is worth the wait as after you have completed The Attack you unwind back through the people you spoke to, ending up at the king in Stormwind castle. 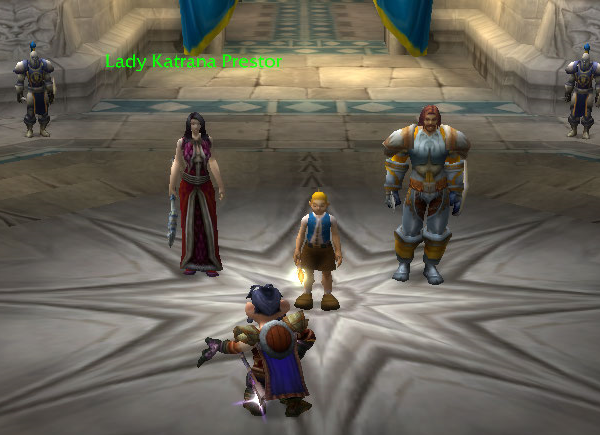 And her, but we’ll get to her later won’t we?

Once there, your reward is a pretty decent ring, with stats for everybody. 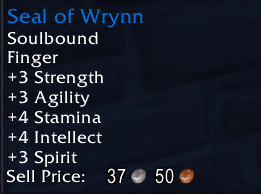 The seal of Wrynn

I will no doubt be hanging on to that one for a while.  And so ended our Stormwind Stockade run.  In its WoW Classic form it is a bit forgettable, though the one quest reward was worth it  If you look through past group encounters with the Stormwind Stockade you’ll see I don’t have much to say about them either, though I do mention that ring after the first run, so I must have done that quest before. (Though I don’t remember it at all.)

As for the next destination, we head straight to Gnomeregan.  We’re pretty far into the level range for Razrofen Kraul, as our side run into it indicates, so it may get bypassed and left for an alt group to conquer.  We shall see.

12 thoughts on “Clearing the Stormwind Stockade”