In keeping with the anniversary theme of this year, and dipping once again into the Computer Gaming World archive.  I give you the ad that ran in the December 2004 issue, which hit news stands and mail boxes in November. 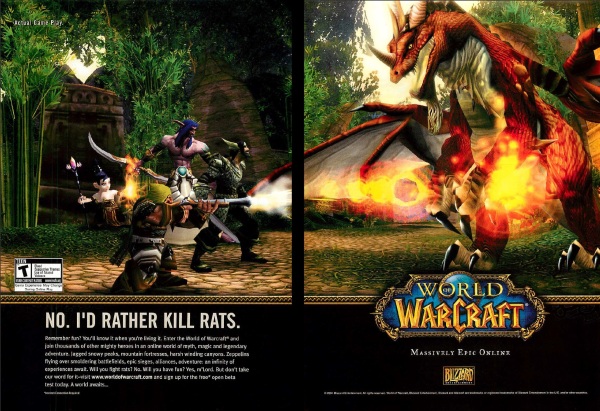 A two-page spread isn’t so bad.  Since I am working from a scan, ads spread across two pages don’t line up unless I leave an appropriate gap.  That is a decent screen shot to capture a bit of the game.  It feels like it is in Stranglethorn Vale maybe?  I’m sure somebody will know where it is set.  I’m not sure there is such a dragon there abouts, but maybe there was at one time.

I suppose at least it was a few pages ahead of the Saga of Ryzom ad.

You might get a sense of how tentative the launch date for WoW actually was from this ad.  Placement of ad copy has to happen a couple months in advance.  So when this ad suggests that you sign up for the beta, it means that likely back in August or so they were really not feeling firm about November.

Again, as I have said in the past, CGW isn’t any sort of definitive measure.  It wasn’t the biggest video game magazine out there.  But it was scrappy and it jumped on big titles to sell copies.  And on the cover of that issue was EverQuest II.  You can see that cover, and download a .pdf of the whole thing, here.

Anyway, happy fifteenth anniversary to World of Warcraft!  I didn’t get around to playing until early March 2005.  When WoW launched I was with Jeff Green, wading into post-cataclysm Norrath wondering if the lighting that was EverQuest might strike twice.

Also, you can totally kill rats in Azeroth if you want.  Sure, that quest in the tram station just has you charm them, but with the implication that they were to be turned into kebabs, which I find to be something of a distinction without a difference.  And the fact that they went hard on the bear, boar, wolf quest kill quests doesn’t exactly represent a leap in the genre.

Where they really innovated was in the realm of poop and outhouse related quests.  Why don’t we have a trailer about that?  Where is my poop parade?

Oh, and today also marks the 25th anniversary since the launch of the Warcraft franchise.

Warcraft has been a thing for almost half my lifetime.