I realize that we’re only a few days into December at this point, leaving almost 8% of the year left to go, but there are also only so many days in a month and I had nothing else brewing for a post, so I am going to run with this a bit earlier that usual  This is where I look at, in a broad sense, which games I ended up playing in 2019 relative to what I thought I might play.

Back at the start of January I wrote a post about what I thought I might end up playing, so this is the nearly end of year follow up to that post.  There is something of a tradition around here with this sort of post, going back years at this point.

The list used to be largely about new games that I was going to play.  And then at some point it became clear that I don’t really play that many new games anymore.  But that is the essence of MMORPGs, that they want to keep you playing for years.  Op success for them I guess.  So now it is more about which stale old title I am going to linger on for yet another trip around the sun.

Back in January I broke my picks out into a few bands of likelihood.  Up first were the safe bets:

And, I was pretty bang on with that list.  EVE Online got play time through the whole year.  WoW Classic has been a big play time favorite since it launched in late August.  WoW Battle for Azeroth was not neglected, though I still haven’t unlocked flying for the expansion, the measure of whether or not you really played by some accounts.  And I did kick off the year still invested in the LOTRO Legendary server idea, though that faded at some point in Moria.

After that there were the “somewhat likely” titles, which were:

EverQuest II was a last minute winner, getting more play time last month than anything else.  And I did dive into Minecraft when searching for stuff that came with the Village and Pillage update.  But Project: Gorgon, that remains unplayed.  I think it might be time to admit that I am just not going to find the time for it.

Finally, there were the wildcards, things I thought that might find their way into my rotation.  That list was:

Out of that list I played EverQuest.  I jumped in and played on a live server for the 20th anniversary in March, explored some new places, struggled with the layers of interface options the game has accumulated over two decades, and generally had a good time.

And that was it.  I never touched Atlas.  Torchlight Frontiers and Camelot Unchained remain as yet unrealized.  I am at the point where I’m wondering if I should apply for a refund on the latter.  It doesn’t seem like it will be a thing anytime soon.  Activision gave me a free copy of Destiny 2 and then it went away before I could be bothered to even launch it.  Diablo III I’ve played enough of.  War Thunder I am just so terrible at that I couldn’t be bothered to install it again, and I thought about Word of Tanks, but never pressed the button.

As for “something else new” I must have been making a joke, right?

Well, as long as we get away from MMOs and such, I did try a couple of new items.  On the other games list I said I would probably play the following:

And I did, in fact, spend some time playing all three of those.  But I also played:

Those all came and went in short bursts of activity, usually centered on some event.   Path of Exile had a new season and some friends wanted to play.  However, the people in the group who were into it raced ahead and those of us who hadn’t touched the game for a few years ended up somewhat lost in the new mechanics added over time.  For me PoE isn’t as compelling as Diablo III or WoW to play solo, so I let it drop.

The original Diablo got a GoG.com remaster, which means they made it work on Windows 10, so I ran through that.  It was good fun.  StarCraft got a Carbot skin, which was enough for me to drag it out and play with it for a bit.

Microsoft Solitaire is pre-loaded with Win10.  I tried it for a bit as something to do while waiting for an op to get going in EVE Online.  It wasn’t all that special, and when it started prompting me to pay, I was done.

Then there was the late summer Auto Chess/Auto Battler round up, where I tried out Dota Underlords and Teamfight Tactics.  They are kind of fun, but in using the heroes from their respective parent games, DOTA 2 and League of Legends, remained a bit too close to their core player base to interest me.

I got Defense Grid: The Awakening, a great tower defense game, during the Steam Summer Sale to earn a badge by unlocking an achievement.  I think that explains a bit of Civ V as well, though you can never play just a “bit” of Civ V.  Age of Empires II HD probably came in as part of that as well, though there was also the launch of the Age of Empires II Definitive Edition that might have sparked some interest there.

And every once in a while when I feel like something akin to old school table top war games I drag out Combat Mission: Barbarossa to Berlin, perhaps the best game in the Combat Mission series.  I’m not a fan of their new engine and they no longer sell the old games, support being an issue.  But my copy still works.

With all of that, here is that annual chart that shows what I played and when. 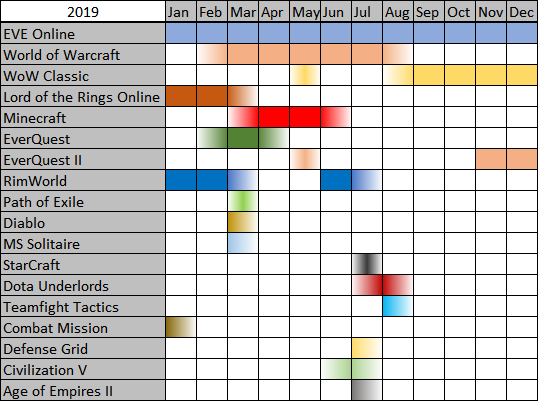 I tried to shade partial months when time played was lot.  Also, this is clearly not the hours played evaluation that my usage of ManicTime has made possible.  I will have to wait until the new year to sum that up.  What I played is easier to do early than something based on real numbers.

EVE Online I played some every month.  There is some pressure to get credit for the corp by going on some ops every month, and I help out with that.

I am a bit surprised by how much retail WoW I played.  I guess I did get into the new content and leveled an alt to 120 and all that.  But that pretty much fell off a cliff when WoW Classic hit.

LOTRO also fell off a cliff once I got into Moria on the Legendary server.  I loved the original content, even in its modern form, and even Moria isn’t so bad, but everything after that is pretty much dead to me.

I figured I would play some EverQuest II, but I wasn’t sure if I would find some way to enjoy EverQuest during its 20th anniversary.  But I found a way.

RimWorld remains a solid time eater when I pick it up.  However, it does suffer a bit from the mid-game problem.  You hit a point where things are pretty balanced, you have supplies to last you through downturns and your defenses are good enough to thwart attacks and you’re just kind of waiting for research breakthroughs.  I started a primitive tech game… well, I started about a dozen until my group didn’t die out in the first two years… but that just pushes the mid-game back some, so eventually there is refrigeration and defense turrets and assault rifle production and you’re just working your way to the end game.

So that is what I played in 2019, for a specific definition of the word.  I decided not to bring mobile into the mix… Pokemon Go would just be another 12 month bar and I don’t record when I play anything else… and I left off a few where the play time was so small as to fall below my own mental threshold what ought to count.