SuperData Research is out with their November digital revenue chart. 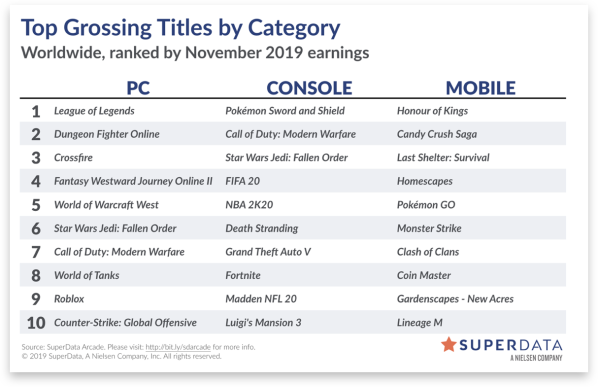 On the PC end of the chart, last month’s top five, including WoW in fifth spot, remained in place.  The new Star Wars Jedi: Fallen Order, came in at sixth place as EA went against type and made a single player, non-cash shop, good Star Wars title.  The big surprise on the PC side was the disappearance of Fortnite as its star continues to descend.

In the console column, Nintendo and Pokemon ruled the month as Pokemon Sword and Shield rose to the top of the chart.  Nintendo still depends much more heavily on the physical retail channel than its competitors, so topping the digital chart is a feat for them.  Call of Duty held on in second place while Star Wars Jedi: Fallen Order had its debut in third position.  Fortnite hung on for console and, as noted below, drives the F2P revenue market there, but continues to slip.

And on the mobile side the top five just changed positions a bit from last month, with Candy Crush Saga going up a spot and Pokemon Go dropping down on.

Once again, we can compare the SuperData chart with NPD’s video game sales data from November in order to get some sort of sense of the market.  As always, NPD is US only, combines PC and console sales, and doesn’t always include digital sales.

I was a bit bemused that Pokemon Sword and Pokemon Shield wasn’t at the top of the list until I realized that NPD broke it out into three different SKUs for the list.  While the numbers are not available, it seems that Pokemon Sword and Pokemon Shield did very well in retail if it claimed three spots on the chart without digital sales being included.  You can see why I moan about the removal of Pokemon from the 3DS killed that console.  Pokemon sells.

NPD didn’t get their Speed Run newsletter out this month, so I do not have anything to add there.

But if you are in need of some more numbers, or want some UK sales data, Gamesindustry.biz did a summary of the 2019 UK video games market with plenty of graphs.  I’ll tease that with their first graph, which covers global sales for 2019 (as estimated with data available in October of 2019).

Other items from the SuperData update: