My new calling card I suppose

As I mentioned early in the month, our long time corp Black Sheep Down was folding up shop.  With just a few active players I gather there was some pressure to be absorbed into a larger corp in TNT.  I doubt I would have left Black Sheep Down otherwise, as it enabled me to do what I wanted to do in EVE Online, which mostly involves repairing space ships in fleets and blowing up structures.

But given the need to move I also now had the incentive to consider where I should land.

This is a lesson that all companies, real or virtual need to remember.  Customers will often stick with you simply because it is easier to deal with the known than consider the unknown.  But if you force somebody to consider it, they might decide they would be better off elsewhere.

And so I ended up in KarmaFleet, the then CFC response to the “levee en masse” idea that started to become a part of war in null sec.  Once it was difficult to get into null sec alliances.  Many considered themselves elite.  But the math of “N+1” is what ended up winning wars and now any coalition beyond a certain size has to have some form of easy entry, new player friendly organization to keep fleets full and fresh blood replacing attrition.

Dear kindly social worker,
They say go earn a buck.
Like be a soda jerker,
Which means like be a schumck.
It’s not I’m anti-social,
I’m only anti-work.
Glory-osky! That’s why I’m a jerk!

KarmaFleet has their own answer to that question and produces propaganda around that. 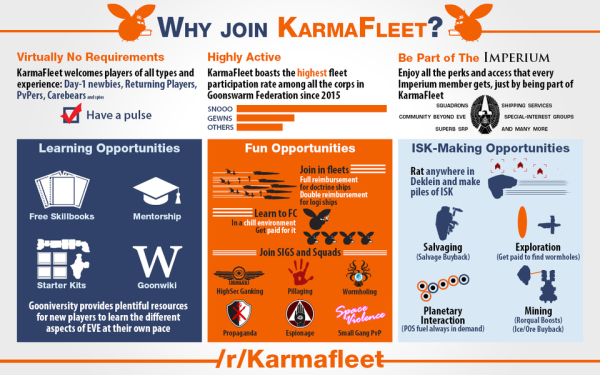 I’ve pointed a few people in the direction of KarmaFleet in the past as place to get access to the null sec aspect of EVE Online.  (Tellingly, I never suggested TNT or our old corp.  Being around me is not a lot of help in game really.)

Of course, they also produce propaganda that might be more on point.

I may already be in that final state even as I join.

I certainly didn’t need free skill books or free ships, I had access to almost all the SIGs and squads when I was in TNT, and I am in a post-ISK state of denial, living off of the modest reserves I acquired in my more enthusiastic days.

Instead, the move to KarmaFleet was more of a simplification of my time.  Being in TNT gave me access to all of the GSF infrastructure.  In fact, it is a requirement to be integrated with their auth services, forums, coms, and what not in order to participate.

But TNT also has its own auth services, forums, coms, and SIGs, which are also required, such that to be in TNT means keeping up basically a dual set of services.  That wasn’t exactly a huge burden, largely because I mostly failed to keep them going.  I would update TeamSpeak for corp meetings when they happened, but I was mostly in a state of lapsed compliance.  Having, for example, a that second Jabber account TNT that would echo every Goonswarm all/all ping but wasn’t hooked into SIGs and squads wasn’t all that useful.

Now, in KarmaFleet, all the things I already had setup and maintained remain the same and the stuff I would occasionally have to get back into compliance with are no longer an issue.  That and a few other small items have streamlined things for me a bit.  I wasn’t going to leave our corp just for that, but since I had to leave anyway, I figured I might as well find what benefits I could.  So I indulged my laziness.

Getting In for Normal People

Of course, that is why I went.  How I went, that is a bit of a tale in its own.  As with many things, what you’re told and what actually happens do not always exactly align.

The application process is simple.  You go to the KarmaFleet site, click on the “Click Here to Apply” and follow instructions.  You create an account, add you API data for your characters, and fill out an short application that asks about your history with the game mostly.  The characters part is the sticking bit for most people.  I have seen it come up on their Discord multiple times and it was the only question directed at me; did you list ALL you characters in the game.

I foolishly said I thought so but that I had been playing since 2006.  So I had to answer the question in a couple more ways before I got an “alight” in response.  I’m pretty sure a spy would have just said yes, they were certain, but whatever.  Spying is still a bit of a mania.

After that you wait for a bit… I waited for almost three weeks… and then somebody will give you the yea/nay on your application.  If you’re accepted there will be a corp invite waiting for you in game… which was the only notification I got.  Accept that and you are in KarmaFleet.  An automated in-game email will show up full of all the things you need to do to register for and access the various alliance resources.

Getting In for the Encumbered

Of course, I was a bit different.  I was already in the coalition and already registered and on the various services and there is honestly not a lot out there about how to move forward from there.

I had dropped roles in Black Sheep Down a while back, so when the invite came I accepted it and was in KarmaFleet right then.  I knew from having heard in the past that I would have to re-apply to the various SIGs and groups to which I belonged.  But while I was in KarmaFleet nothing else had changed.  I still had access to all my old groups and various identifiers still showed me as belonging to TNT.

Here is what to do; be patient.

At some point the system will poll and notice that your current status does not match what it has stored for you, and it has only one response to change… to purge you as an inactive.  At that point you will get an email telling you this with a link the the authentication system and instructions to go log in and click the button to restore yourself.

Once you do that you will be set to go.  Your info will be correct and you will have access to all the default forum areas and such that you get as a corp member.  You have to reapply to all your old groups again, but that is pretty easy.  I was back in Reavers pretty quickly, for example.

I did not know the “be patient” part.  I last changed corps back in 2013 and almost everything in the API and authentication area has changed since then. So I asked in the general Jabber channel how long it would take for the data to refresh.  Somebody told me I needed to go push a button in the auth interface and everything would be fine.

But it wasn’t.  The system hadn’t gotten around to noticing something had changed yet.  It seems to poll about every couple of hours I would guess.  And until it notices you and takes action, there is no button to press that will move things along.

Somebody had indicated that there was something I could do and, having forgotten to calculate in the value of advice from random Goons in a general chat channel, I spent a futile hour or so poking various things in the hope of forcing an update.  Only then did I decide to be patient and went off to do other things.  Later, when the email arrived, I went and pressed the button and things were fine.

Now to wait for EVE Who and zKillboard to update while I reapply to my various SIGs and squads (and one new one that was just formed).  I actually might not reapply to all of the ones I was in previously.  I never was of much use in CapSwarm nor in the fleet booster SIG.

I just need to figure out how to get Pidgin to stop trying to log into their Jabber/XMPP conference channels every time I launch it.  I can’t find a UI element that controls that, but it knows to try and log me in every time, so there is probably a config file somewhere I can edit.  (Also, maybe I should upgrade my seven year old copy of Pidgin to the latest version.)