CCP is giving out some more free skill points.  This time they are throwing us another pile in compensation for the outages that were caused by the DDoS attacks earlier this month. 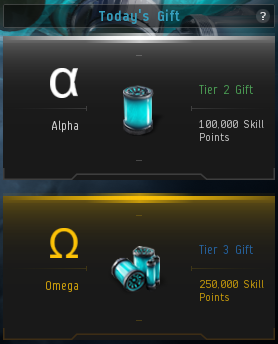 Since this is coming through the login reward interface, if you’re an Alpha clone but are just dying to get those extra 250K skill points, you can subscribe and claim them.  It doesn’t matter if you were an Alpha during the outage, you just have to go Omega before time runs out on the offer.

Something in the back of my brain says I should be angry about CCP selling skill points this way.  If you’re a high skill point salt that is one and two-thirds of a large skill injector for just $14.99, or 500 PLEX.  Probably not a great price, but a price none the less.  And who cares anyway?  We’ve long since crossed that bridge and burned it behind us.

So don’t forget to log in and grab the free skill points.  I know I will drag out every account, because who knows when I might need it some day.