CCP has decided to celebrate the fact that capsuleers have raised well over half a million dollars in the various PLEX for Good campaigns over the years, with the most recent having kicked off last week in support of the COVID-19 Solidarity Response Fund. 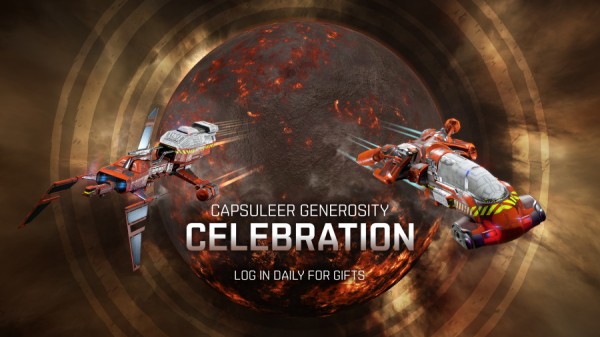 Alpha Clones who log in will get the Frontier Safeguarder SKIN for the Osprey, Augoror, Scythe and Exequror.

There are only four days of rewards, so you do not have to log in every single day for a week.  Just any four days in the range will get you there.

Day one of gifts

Since I love SKINs and fly logi and have donated to several of the PLEX for Good campaigns, I am all in on this.

Beware though when you claim your gifts.  CCP has a little change-up in how things work and, judging by surprised player (and CCP) responses, this was not communicated well.  When you redeem the gift, the SKIN is activated for the character on which you redeem it.  It won’t drop into your hangar, there will be no little red dot in your inventory, you can’t hand it over to an alt, it is staying where it is redeemed.

The tool tip confirms that this is expected behavior. 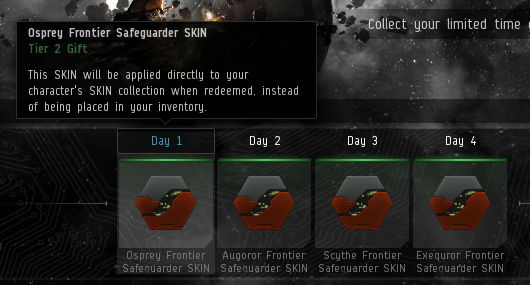 So don’t redeem this on your Jita alt expecting to sell it.  You’ll just end up with a sales alt with a nice SKIN they will probably never use.  Some people are saying that they didn’t get the SKIN, but it isn’t clear if they noticed the tool tip.  One sure way to check is to go to your SKINs inventory in your character sheet.

Where your SKIN ends up

While this does diminish my need to collect these SKINs on my random alpha clones… I have two characters on my main account that would use the Osprey SKIN and can’t hand them over… I’ll still go grab them all the same.  You never know when an alt might rise.

And if those aren’t enough SKINs for you, CCP has some new ones for Guristas hulls in the store and others on sale.  SKINs for everybody.

We can collect those while we wait for next week’s Surgical Strike update.

I didn’t do a post about that announcement because I had another post queued up and because there were enough questions raised that I figured I ought to wait until CCP came back to clarify and adjust, which they did.   We’ll get those changes as a follow on patch, but they are planned.

Overall though, I am in favor of more spaceships exploding… and nerfing Munnins… but there will be some adjustment time after the update hits.

CCP has also been talking to MMORPG.com about how they have shaken up their development process since the Chaos Era.