After our run through The Altar of Zul and Jintha’alor the previous week it felt like we needed a level or two across the group before we should consider taking on Zul’Farrak.

Left with some time to consider this, I did a bit of scouting and decided that Booty Bay might be the opportunity for us.  Down at the southern tip of Stranglethorn Vale it has a flight path, a boat connection to Kalimdor, and, most importantly, a pile of quests, most of which are quite well suited to group activity. 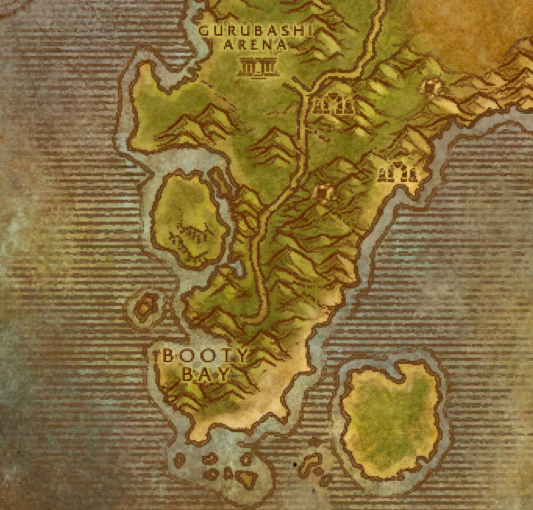 The far end of Stranglethorn Vale

So when we all met up on Sunday, everybody flew on down to get stuck into the many quests out of Booty Bay.

Hanging out in Booty Bay

Our group for the afternoon was:

Both Moronae and I had notched up a level since our last venture, but we needed to get Ula and Skonk further along.

What I had not considered, having done my scouting later in the evenings during the week was that maybe that was not representative of prime time on Sunday afternoon when it came to how many people would be out and playing.

No social distancing order in force in Stormwind

Still, we grabbed what quests we could scoop up and left town to get started.

This is where I mention one of the minor annoyances of the good old days of vanilla WoW, which is where you could actually ride your mount.  Booty Bay was not one of those places, so every time we returned to town we got dismounted in the tunnel and had to hoof it the old fashioned way, save for Moronae, who has the minor speed boost you can get with cat form.

Anyway, first on our list was the start of the Bloodsail Buccaneers chain, which you need to get out of the way as it unlocks a few quests.  For that you need to run down to the cove near town and pick up a document.  This is usually complicated by there being a bunch of Bloodsail Buccaneer NPCs hanging around.  However, on a Sunday afternoon they were scarce, so we could just walk up and collect the document.

From there, as were down on the beach already, we headed a bit north for a quest involving the local naga.  We each needed 10 drops from them, which is a pain for a group, but it is one of the few quests out there that requires it, so we rolled in expecting to massacre naga.

And we found the naga were being pretty well hunted.  Ten drops is even more painful when you cannot even get the NPCs.  But we dove deeper into the naga domain and found an enclosed area up at the top of the hill where quite a few would spawn.  There were a couple of people going in and out of there, but the naga were close together, so not easy for the at level singleton.  With four of us though we were able to set up shop and pull everything that spawned.  Our effectiveness sent the occasionally interloper off to find less contested grounds while we built up quite the gut pile of naga corpses. 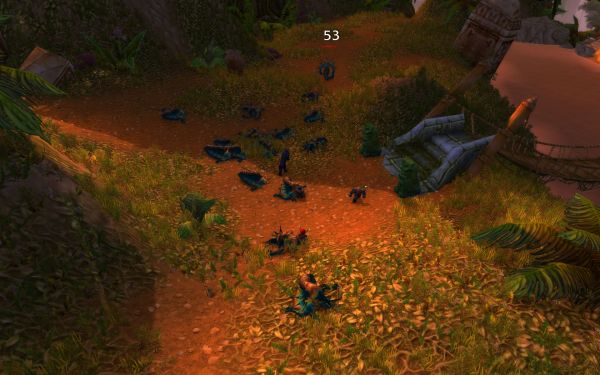 All the dead naga

The drop rate wasn’t great and we needed to clear quite a few waves of naga, but we managed to pull through eventually.  It speeds up once one person gets their fill.

From there it was back to town where we turned in those quests and picked up the three that unlocked for us.  We needed snuff and a wooden eyeball as drops from the local Bloodsail Buccaneers, but to get down the main quest line we would be killing so many that those drops would come naturally enough. On the main thread we needed two documents, orders and charts, along with ten Bloodsail Swashbucklers to finish the next stage of the main quest line.

That seemed easy enough except the beach where the Swashbucklers hang out was also pretty crowded.  The weather gets warm and everybody heads to the beach.  There was also the matter of the two documents, each of which in my experience spawn in one very specific place.  However, that is apparently only true if you catch them first or during a slow period.  Otherwise each document can appear in a number of locations between two camps, and they move after each person picks them up.  So we spent a bit of time running around figuring that out.

On the up side, when we got to the further camp, we found that Cowardly Crosby, the tailoring vendor, had the tailoring recipe for the Admirals Hat.  Ula, our tailor, snapped that up.  Those will probably make some money on an RP server.

We got the documents sorted, but spent some time fruitlessly trying to nab the ten Swashbucklers.  We took a bit of a break from to go up the main road a bit to take out elder mistvale gorillas for another quest.  Only five drops were needed there, and I had already done the quest, but it still took a lot of gorilla killing to get just those five for each of us.

That done we went back to roam the beach to do our best to find Swashbucklers.  We had a bit of luck, and found a couple on the islands off shore, and eventually bagged our quota.  It was time to head back to town.

At that point we were already a couple hours in and I was getting the feeling that my plan for free ranging quest completion was not going quite as smoothly as I had hoped.  But we were now line up for a three quests well suited for a group.  The first involved slaying Gorlash, an elite giant just a ways north from where the Swashbucklers were being hunted. 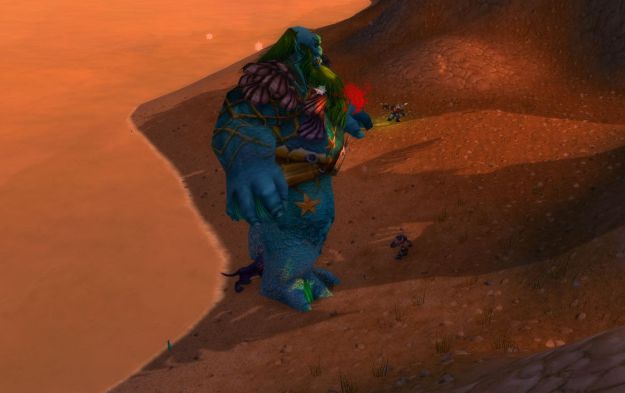 For four of us Gorlash was a doddle.  We brought him down easily enough.

From there is was back down into Bloodsail Buccaneer territory where we had three named mobs to find out in the ships off the shore.

At the first ship

As there were three names and three ships, it seemed to spark a distant memory that we would find one on each.  Of course, we had our own share of minor issues.  On the first ship, as we were clearing the deck, a Horde group ran past us and nabbed the target ahead of us.  Things be like that some days.  We were mostly disappointed that they didn’t get mobbed and slain by the remaining NPCs as they made their escape.  It was close though, and we certainly didn’t lift a finger to help.

So we cleared the ship, got some snuff drops, and setup to wait for the first of our targets.  Captain Stillwater arrived and we knocked him out quickly enough. 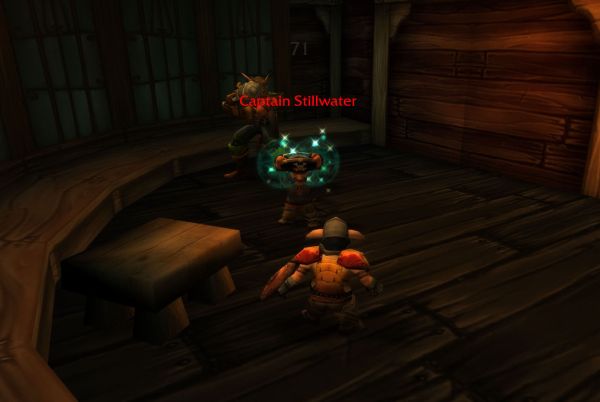 Then it was off the boat and on to the next one.  Here we were alone on the ship, so cleared our way in to wait for Fleet Master Firallon. 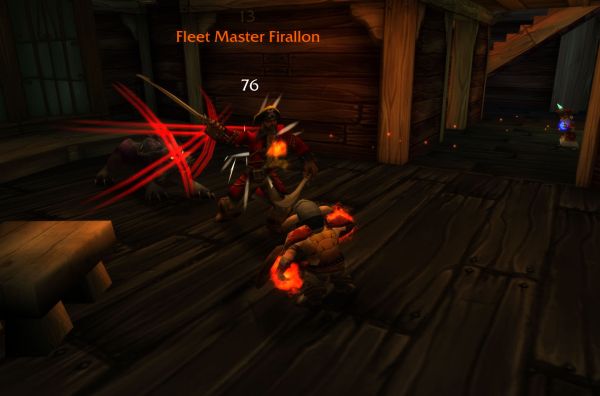 I’ll give Firallon this, he really looks the pirate part.

Having slain him, there was one ship left, but once we cleared our way in for the final target, a warlock showed up looking for the same mob.  So we invited Ketimelt to our group and killed the last named.  But Ketimelt still needed Firallon, so we went back to the last boat and killed him again.

After that we parted ways with the warlock and headed out for the last target of the night, three named zombies up around the Gurubashi arena.  Again, we arrived to find everything dead, so hung around until the first two we needed spawned… and then spawned again.  That seemed to indicate that the third one was somewhere else, so we had to look that up.  Directions to the beach in hand, we headed over there and joined up with a hunter who was also camping the same zombie.  After a bit of a wait, we nabbed him.  It was time to head back to Booty Bay.

Riding back south to town

There we turned in the quests we had finished and tallied up our efforts.  Both Ula and Skonk had advanced to level 45 and all of us seemed to have gotten at least a half of a level of experience out of the effort.  That was less than I was hoping for, but my optimism knows no bounds at times.

That was enough that our next effort will take us to Tanaris.  There are a few quests to be run there as well as at least one prep quest for Zul’Farrak.  And if we run those down quickly we can always go into ZF itself and start in on the quests there.

2 thoughts on “An Interlude in Booty Bay”