The WoW Token highway has no exit

You can tell when I have started doing my month in review post as I am suddenly all about things that happened five or ten years ago, and such is the case now.

The purpose of the WoW Token, and other like items such as EVE Online’s PLEX or Daybreak’s Krono or Anarchy Online’s GRACE, is to fight illicit RMT, which has all sorts of fraud and theft issues associated with it, by giving players a legitimate way to buy in-game currency that both gives the developer a cut of the money and doesn’t dump currency into the economy.  The company is merely the agent between players trading the in-game currency for subscription time.  It is RMT, but “good” RMT so far as the developer is concerned.

That Blizzard and CCP and other companies have done this, and kept up with it over time, must mean that it is working for them somehow.  If nothing else, it is another revenue stream in a world where a monthly subscription is often a barrier for players.  Whether it has made a serious dent in illicit RMT I cannot tell, though it was interesting that some gold sellers seemed to revive with the coming of WoW Classic, where you cannot sell a token for gold.

And, of course, it isn’t any sort of panacea that will save a game.  WildStar built its plan initial business plan on their CREDD idea and that didn’t save it from going free to play then shutting down.

In WoW the idea itself took a while to grab players, at least in North America.

When it launched at a starting price of 30,000 gold per token there were some people who declared that now was the time to jump in, that there was nowhere to go but up!

And then the price dropped immediately, landing below 20,000 gold in the first month.  It revived eventually, getting back over 30,000 in September, then starting to really climb come 2017 and peaking in 2018.  But there was an initial stretch there where it wasn’t all that attractive relative to illicit RMT.  Over the five years:

The NA start was in some small contrast to the EU token prices, which started at 35,000 two weeks later and only went down a bit before beginning a fairly steady rise.  I am sure that says something about the two markets, though I am not sure what. 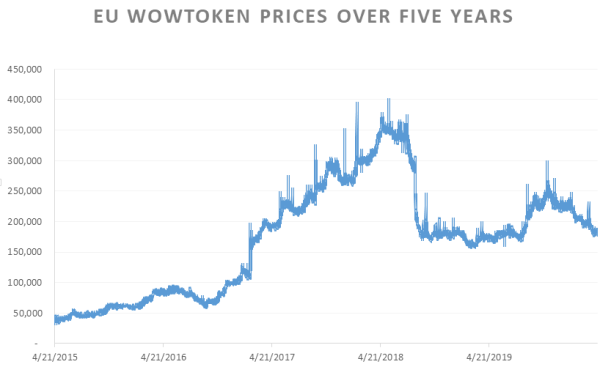 Still, even though the token prices vary, the pattern of the prices over time looks remarkably similar when charted.  And no doubt they probably ought to in reaction to outside events, like when you were able to buy Call of Duty: Black Ops 4 with WoW Tokens, which accounts for that peak price in 2018.

I am curious as to how people feel the advent of WoW Tokens have affected the game over the last half decade.

I, personally, have been only somewhat attached to the game over the last five years, playing it to see the game but not getting that deeply invested in it.  I have been a casual WoW player during that time for certain, and it was only the advent of WoW Classic that got me really back to Blizzard.

I have purchased two WoW Tokens.  My daughter pleaded for one so she could buy some RP gear for her RP guild when the price was around 100,000 gold and I bought one for myself one day when I was logged in and saw the price was around 220,000 gold and thought I might never see that price again.  But then the game sort of rains gold on you these days… going back to get flying in Battle for Azeroth I was shocked at how much gold I was given for random things when in WoW Classic I am grubbing for silver coins still… so I have earned more gold since just playing than I bought. (Mostly during Legion.)

My closest experience with something like WoW Tokens has been PLEX in EVE Online.

There I don’t buy it to activate game time but just to get a ship SKIN now and then.  But I’ve seen people who get pretty caught up in the idea of “PLEXing” their accounts every month, which becomes a mania with some people.  People who “crab” a lot… mine or run anomalies for ISK… are often suspected of being in it for RMT purposes.  And they often are, but not for illicit RMT and supplying ISK sellers and such.  They need to make the ISK to buy the PLEX in order to pay for their subscription.

The big nerf that hit last week with the Surgical Strike update will break the game for some people because they are invested in super carrier ratting… super carriers were pretty much invulnerable up until last week as they could kill small groups of subcaps and could survive to be rescued from larger groups… and with the changes they won’t be able to PLEX their accounts.

Azeroth is a lot different than New Eden however.   I know people who obsess about earning gold in WoW, but I am not aware if it has reached that level.

So how do you feel about WoW Tokens five years in?  I’m okay with them, but I am also out of the loop enough to not see or care much about the impact they might be having.  I’ll even put in a poll here.

If you cannot see the poll above this line… well, your web browser and ad block settings are keeping you secure.  I cannot argue with that, but you don’t get to vote unless you use the browser on your phone or something.

Data for this post cam from WoWToken.info and WoW Token Prices.

The latter has nice charts on their front page, while the former wouldn’t let me see any of their charts even with ad block off and security down. 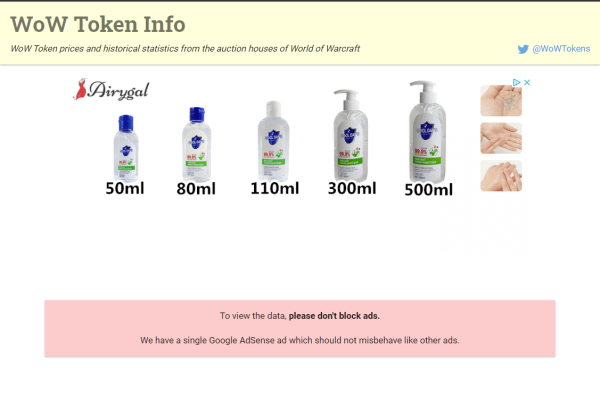 Seriously, I am looking at the ads but they still won’t show the charts

The latter site pointedly makes reference to this if you have ad block on.  But the former has all the historical data available as a .csv file, which I was able to download, so I have to give them credit for that.

There is also data for the WoW Token markets in Taiwan, Korea, and China, but I did not dive into those as there are different dynamics in play there that I am even less aware of.