Another set of shared posts started in the Blapril Discord channel around the Nick Yee/Quadratic Foundry gamer motivation profile quiz, and I was going to simply give it a pass.  After all, I had done that back in 2015 and then again as part of Blaugust last year.

But then I read the post from Bhagpuss on the whole thing and decided that I needed to take the quiz again right then and there if only to prove a point or two.  So I opened up a fresh Chrome session in privacy mode and ran off to take the quiz.  I already have a profile there but didn’t want to be tainted by anything I had done in the past.

One quiz later and the results were mine.  I am “Aggressive, Spontaneous, Gregarious, and Grounded” according to my answers. 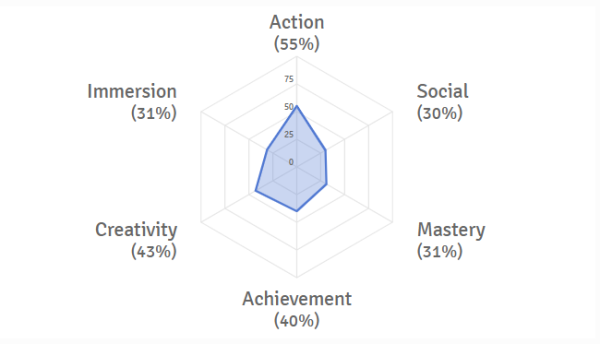 Just eight months back during Blaugust I was “Calm, Driven, Gregarious, and Grounded,” and had this chart.

And about four years earlier, back in June 2015, I was “Calm, Spontaneous, and Grounded,” according to my answers, with the following graph. 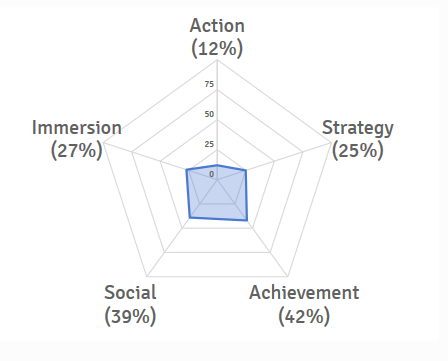 I guess there is a common theme in “grounded,” though that may be due to wearing a static strap while taking the quiz.  You cannot be too careful!

So what is going on here?  Is the quiz garbage?  Am I a liar, and an inconsistent one at that?

Maybe some of both?

That the quiz is garbage isn’t a hill I am willing to die on.  But I will stick with the idea that the quiz, like much in the realm of the social sciences, is trying to measure complex things via simple parameters.

And while I am demonstrably an unreliable narrator when I speak of my own motivations, I would contend that is because said motivations are not simple, but are often complicated, interdependent, and contextual.

So when I get a question like this about story absent any sort of context, there isn’t really any clear choice.

How important is this to me?

In a lot of games it isn’t important, or it is something that is organic to the game and develops over time.  There isn’t a whole lot of story in RimWorld or Civilzation V or Minecraft other than what you make.

In other games, like EverQuest II, there is a lot of rich story going on that I tend to skip pass.  I am at the quest giver saying, “Cool story bro, but just tell me who you need killed already.”  I honestly cannot tell you any of the big story arcs for any of the expansions in any but the most simple terms, if at all.

I am a little better in World of Warcraft, where I can at least tell you the major plot line of most of the expansions, but I still tend to read the quest objectives on the way rather than listening to any NPC tales.  Just give me the damn quest Anduin!

But in a game like Diablo III I am all about the story, which is part of why the post story seasons don’t do much for me.  Slaughter and levels upon levels and piles of gold don’t mean much as the context in which the really mattered has passed.

So if I am playing a Civ game, it is not important, if I am playing Diablo III it is extremely important, and if I am playing WoW or LOTRO is is somewhat important.  So what is my answer supposed to be then?  As with a lot of questions I went for the middle ground, which you can interpret as a shoulder shrug and append the phrase, “I guess” to the end.

It is thus easy to argue yourself into the position that everything on the list is not important at all.  Nobody is going to die if the storyline of your game is insufficiently elaborate.

Without context the questions are meaningless, and the quiz is no fun if you you just wet blanket the whole thing, so what happens to me is that I start to think of context where the thing in question is more or less important to me.

But those are all thoughts of the moment, and if I took the quiz in another two weeks I bet I would come up with a different set of contexts that would alter my answers.  I took the quiz less than an hour ago and, as an example, I cannot remember what came to my mine around this question regarding being an agent of chaos.

Not an Agent of KAOS

Right now I can come up with context that get me to any of the response options, but I cannot even recall the answer I gave, which at least implies I did not weigh it heavily.  It was very much in the moment.  And given that the only common thread in my three results is being “grounded,” which sounds like the opposite of being an agent of chaos, I almost feel like there should be a slider for how serious an answer should be taken.

I think the only thing I picked as extremely important was about explosions and blowing things up, which was probably my most visceral response.  But I don’t know how much of an indicator it really is.  Blowing things up for me tends to apply mostly to EVE Online or maybe Minecraft when I have some dynamite.

At the end of the quiz, once you get your score, you can then go to the game recommendations page.  My theory is that if you have answered all the questions correctly… yeah, what does that even mean… the recommendation results should include at least a few games you know and like in the top results.  According to the site, the results are based on the favorite games of the 1,000 people whose answers were closest to your own, so it gets around the whole “is the quiz even valid” and gets straight to “garbage in, garbage out” for results.

For the last two sets of answers I got the following recommendations:

Not completely off the mark I suppose.  I own a bunch of those games, and certainly Civilization would make the cut and I guess RuneScape is an MMORPG, but there is nothing on the list I am playing a lot of lately.

“Balanced” refers to the relative popularity of a given title in people’s lists overall.  You can also see just “Popular” games or you can open it up to “Niche” games.  Going with “Popular” makes the list less likely for me. The Fallout series dominates as individual titles.

Going with “Niche” does get my Lord of the Rings Online on one list, and RimWorld makes the other, but it puts Cookie Clicker at the top of one of them and WTF is that doing on any list of mine?

Now I am curious to know what answers would get me to EVE Online or World of Warcraft as a top ten recommendation, even in the “Niche” category.  I want to reverse engineer this, to figure out which buttons I need to click to get an answer that matches a game I am currently playing and then evaluate whether those answers really fit me, even if it is only in the context of a specific game.

All of which seems to make this quiz and its results a good conversation piece or a starting point for some self-reflection, but it doesn’t seem to provide anything that one might qualify as a solid answer

Anyway, if you want to see the results and responses from other bloggers, Jeromai over at Why I Game has the list of links you are looking for.