We got the EVE Online monthly economic report for June late last week, and it is an interesting one for a few reasons.

First, June was a month of relative peace in null sec, the last few weeks before the start of World War Bee.  Since the war kicked off on July 5th, June will be a nice baseline to see how much of an impact the war has.

Second, June shows a bit of a change in the trend since CCP’s mineral starvation plan kicked off.  For the last few months, as the company has choked off the mineral flow the price, so far as the measurement they use in the MER is concerned, has been going up.  But that ended in June. Mineral prices went down… a bit. 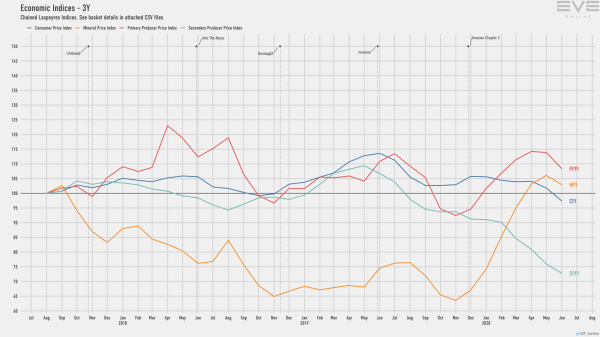 The price isn’t down a lot, just to about where it was in April when prices were nearing the end of their long rise, but that is still a change.  All three indices, the PPPI, the SPPI, the CPI, and the MPI were down in June.

Third on the list is where mining has been happening.  High sec regions have always been part of the mix on this list, usually the three closest to the markets in Jita and Amarr, but null sec regions have dominated the list since I started writing posts about it.  Last month that had changed up and 6 of the top 10 regions were high sec.  This month the top 10 has only 1 null sec regions.  The list for June:

Fountain is in 10th place.  Delve, which rang in 1.78 trillion in mining in May to top the list didn’t even make the cut in June, landing in 11th place with 607 billion ISK. Oasa, which was in 6th position in May with 1.35 trillion landed in 19th spot in June with just 502 billion ISK mined.

The drying up of anomalies and minerals available from moon mining operations appears to have hit hard.  I know that some of the mining platforms in Delve, which sit on nearly every moon in the region, have remained idle as running a frack wasn’t deemed worth the effort.

High sec regions totals are down, but only a bit, maybe in the range of what might be explained by the drop in prices.  But null sec mining is way down, far beyond the ability of a small price drop to explain.  You can see how the regions stack up these days, with high sec regions on top now.

The total value mined for June was 24 trillion, down from 29.54 trillion mined in May, a drop that one can only attribute to null sec mining much less.

Then, the last item on the interest front, there are NPC bounties, long a staple of null sec income.  Things are still going strong there, even increasing some.

They changed the long standing colors for the different lines on that chart and I was confused momentarily as my brain knew that NPC Bounties should be the orange line.  Now it is the blue line.  And the blue line went up in June.  That happens when there is some breathing room in null sec, a bit of peace.  A total of 54.2 trillion ISK in NPC bounties were paid out in June, up from 47 trillion ISK paid in May, which says that there was simply more ratting going on.

And who did the most ratting?  Here are the top ten regions:

PandaFam appears to have taken over as the biggest group of crabs in null sec, though the expansion of that coalition to include Fraternity and a few other alliances living in the northeast no doubt help boost those numbers.  But that is a lot of ISK coming in, though in the regions where they are doing their ratting there are not many close by systems with NPC stations, so super carrier ratting, now much less common in Delve, has likely not had to slacken as much for PandaFam.

So there it is.

Now, the question is, what will July look like?

Mineral prices dropped even as mineral supply dropped, which seems to suggest that demand, driven by manufacturing, had fallen off.  Now there is a war going on in null sec.  There have been runs on the market for some ships.  At one point there were barely two dozen Muninn hulls in Jita.  Will mineral prices resume their climb with the increased demand?

With forces deployed to staging systems, will mining and ratting in null sec taper off as well?  Or will the fact that so many combat pilots are now down in the southeast of null sec mean that those in more distant regions… looking at PandaFam here… mine and rat even more?

And will the ADM fleets being run by the Imperium boost the numbers in Delve?

As a bonus question, what will the total destruction number in New Eden be for July?  In June it was 45.67 trillion ISK destroyed, with the top ten regions being:

If the war is really a big deal, we should see a rise in destruction in the regions being attacked (Delve, Fountain, Period Basis, and Querious) as well as adjacent regions where the attackers are staging (Aridia, Catch, and Paragon Soul).

We will have to wait until next month to get the July numbers and find out.

But if you want to look at the June numbers and see all the data behind them, you can download the whole package as from CCP.