Or about a month.  We’re two days shy of the one month mark.  But the was continues on.

Somebody put together a battle report in an attempt to cover all of the war through to August 1st.  The losses of both sides combined on that report tally up to around 10 trillion ISK, split about evenly between the two sides.

There are a few different data views you can look at for this report.  I favor the losses by ship/structure classes as I think it gives a better flavor as to what has been in play.

Heavy assault cruisers are bearing the brunt of the fighting.  For the attackers, a majority of those losses are Munnins.  The Imperium HAC losses are split between Sacrileges, Munnins, Ishtars, and Zealots, the latter two being doctrines exclusive to The Initiative and their fights in Fountain.

Meanwhile, both sides are burning through quite a few interceptors, with almost seven thousand destroyed in the war so far between both sides.  Those and the HACs are a lot of tech II ships to replace.  A lot of ships and structures overall.

But so far I haven’t had a problem buying a doctrine ship off contract in Delve or refitting a hull I happened to have on hand.  The MER for July should be interesting though.  August too, if things carry on.

As for the war.

PandaFam continues to roll up systems in Fountain.  That have taken ihubs (and TCUs) in most of the northern half of the region, including the key transit point systems of J5A-IX and C-4NOD.  Their ihub count in the region jumped from 27 to 57 over the last week, giving them over half of the 108 conquerable systems in the region.  This is now easier to see over at DOTLAN as Wollari added in an option to the regional view to show the ihub owners. (Change covered over at The Nosy Gamer.) 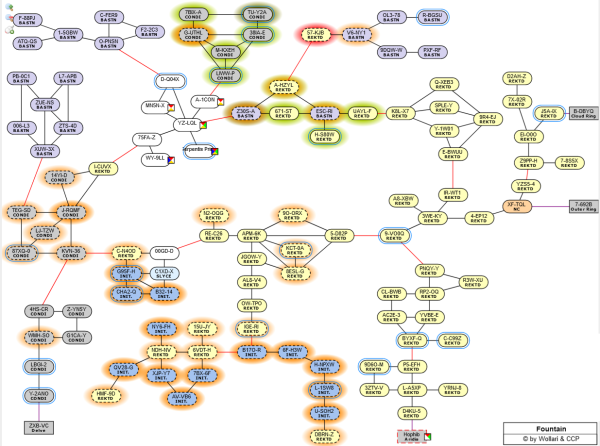 They have also begun to reduce the structures left behind in those systems, though so far they have not gone after a Keepstar, and there are a few of them sitting in the space they have taken.

Meanwhile, the capital fleets of The Initiative and The Bastion have begun pulling back into Delve, an operation not without mishap.

So Fountain, while not lost yet, does look like it will be almost completely in PandaFam hands in another week.  Any fighting over sovereignty is likely to take place in the southern end of the region around the crossroads system of KVN-36.  PandaFam has a foothold in I-CUVX that they can use to stage from.

We have yet to see how the Keepstars will be dealt with, so that is still in question.  The one bright side however is that, in falling back to Delve our ability to deploy forces becomes much easier.  Most of Delve is within a capital jump or titan bridge of 1DQ1-A, our primary staging.

After sweeping into Eastern Querious back on the 26th of July, TEST and their Legacy Coalition allies have not made much ground.  They continue to be rebuffed in Period Basis and have found themselves having to defend some of the ihubs they took in Querious as they are in easy range for us to entosis and their vulnarability windows are large due to low ADMs.  So the map shows a lot of them reinforced. 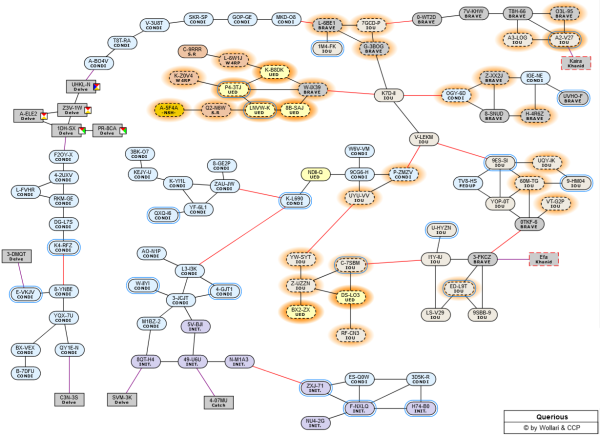 A lot of their stuff is reinforced while not much of ours is.

Unlike PandaFam, they have not pushed as hard on further systems to keep the focus away from the ihubs they have already taken.  They don’t seem keen to put up the same numbers they did when they took the initial systems they hold, though they have managed to take more of the United Earth Directorate ihubs, which can only be defended by the 114 character alliance that was holding them.  That has allowed them to up their ihub count to 41.  Systems with CONDI or INIT ihubs have been defended so far.

I did get in on a few good operations, with the prime one being the dreadnought hunting operation with DBRB.

A Naglfar blows up

My PAP link numbers were down some… and it is hard to count them now as we have rolled over into a new month, and the display options are “this month” and “the last 30 days” a window which is quickly going to start dropping some of my participation.  But I am sure nobody is going to kick me for lack of effort, even if I spent a bunch of time doing stuff off the books.  I still get in fleets, though the war itself seems canted more towards EUTZ, when PandaFam operates.  USTZ has been much quieter.

My losses so far in the war are now:

I moved my freelance entosis operations to the east end of Querious where, I have to say, Evictus is a lot more active and aggressive than Brave was in their own space.  But being on the front lines and with lots of entosis operations landing in that space, they are specifically armed to respond, though one of my Drake losses was to a third party not even involved the war.  They just hang out and hunt at that end of Querious, and have for years.  I was unlucky there.

Last week I was wondering about the popularity of the war given that it had not exactly set the player count on fire.  We will see if that changes as the war approaches the gates of Delve… at least the northern gates, where PandaFam is pushing.  But this past week’s Sunday peak was 35,479 players in the game at once, which is about on par with the Sunday before, which rang in at 35,583.

Structure warfare remains an important part of the war, though it seems to be revolving mostly around smaller structures.  I have been interested to see how the FLEX navigation structures, the Anisiblex jump gate, the Pharolux cyno beacon, and the Tenebrex cyno jammer, which came in with the Onslaught expansion almost two years ago, have been focal points of the campaign.

They are all extremely important to the Imperium and its defense operations.  Anisiblexes let us move fleets around rapidly, Pharoluxes let titans bridge fleets to systems without worrying about a cyno ship, and Tenebrexes, which not yet critical, have been used to keep hostile capitals at bay on a couple of occasions.

So the attackers have naturally targeted them.  They are relatively easy to reinforce, which puts them offline.

Covering an Ansiblex while it repairs

I have been on a couple of fleets where we have ended up at an out of service Ansiblex and had to gate somewhere the long way.  But once destroyed, they are easily replaced.  Their vulnerability has led to a change in how we have been placing them.  Some of them are starting to be located near an armed POS which, unlike Upwell structures, can be anchored within range of them. 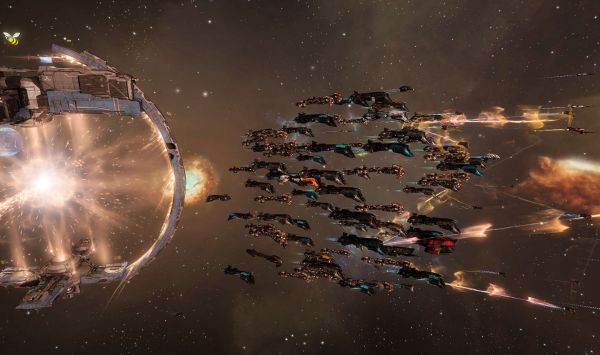 A POS visible behind the Ansiblex

That is not going to stop a determined fleet, but it will make attacks a bit more annoying.

And, of course, because these structures are as vulnerable to reinforcement as they are, that means we can slip into TEST space and return the favor as well.