CCP announced today that Metaliminal Storms will soon be coming to null sec, imparting “weather effects” where ever they go. 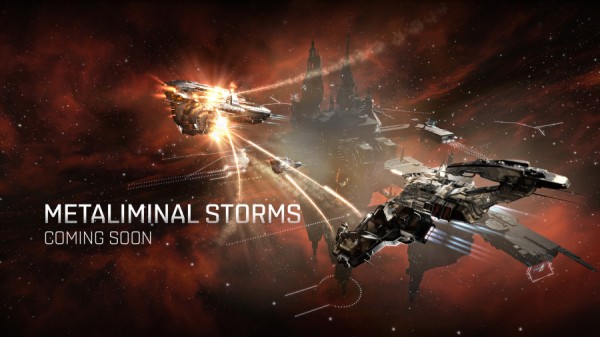 Chaotic storms of Abyssal energy – called Metaliminal Storms – will begin appearing randomly in nullsec space this August when the Metaliminal Storms update goes live, as an unexpected side effect of the Triglavian invasion! These roaming storms will move slowly between star systems via the gate network.

The forum thread with the current details indicates that these storms will move at a rate of one system every 24-48 hours, giving at least some level of warning if a storm is close by.

There are currently four different storm types planned, with two levels of intensity (strong and weak), each of which brings with them a variety of effects on space, some beneficial some detrimental.  The storms will be akin to hurricanes, with a central system as the “eye” of the storm with strong effects being felt there and adjacent systems, while weak effects will be felts in systems two or three jumps away.

The way the describe storm movement, they appear to be effectively taking gates, so they follow what I might call DOTLAN map logic, where the distance between systems connected by a jump gate is effectively a constant, and a very small one at that, as opposed to what the in-game map shows, where the distance between systems can vary greatly, especially when it comes to gates between regions.  This may lead to some odd situations.

For example, since I have been marking up maps of Fountain lately due to the war, if the “eye” of a storm is in KVN-36 or C-N4OD, the storm effects will ripple out to the northern and southern ends of the region without touching anything in the middle thanks to the long gate jump between the two systems. 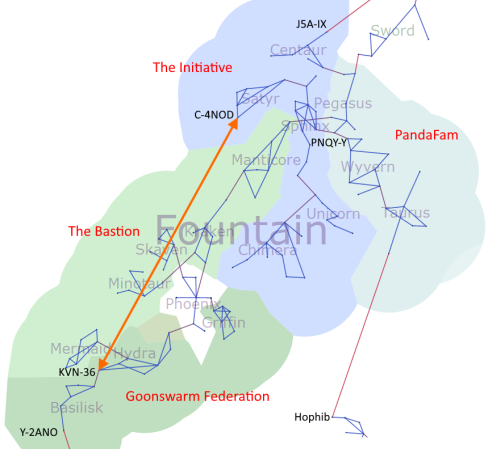 Likewise, if the “eye” is in D4KU-5 in Fountain, the effects will ripple into Aridia despite the two regions being too far apart for a capital to jump between them.

The plan right now is to have eight such storms, two of each type, wandering null sec.  The “eye” of the storm will always be in null sec, but the effects can reach into low and high sec systems if the storm travels in that direction.

Of particular note to almost everybody reading the effects is that electrical storms will disable the ability to use a cloak in systems affected.

As with all things from CCP, this is likely subject to change before it hits Tranquility.  It has not yet been put onto the test server, Singularity, but the company plans to test it out there before it goes live.

CCP is soliciting feedback in the forum thread linked.

Many people are wetting themselves at the idea of cloaking being disabled.  And the boost to probe strength will really make it tough to hide.  I always felt cloaky camping was one of the prices of playing in null sec, so expect this will end up being a mixed blessing.

I am only surprised that there isn’t a storm effect that removes interdiction nullification and puts logi on kill mails if CCP really wanted to play to capsuleer requests.  Maybe they are holding those for round two.