There was a ping prompting people to be ready on Tuesday night as a battle seemed to be brewing.  For one… as much of the was seems to happen in EUTZ… the time set was in a sweet spot for me, early evening my time, so I was logged in and ready to go when the fleets began forming up.

There were two fleets available immediately, Munnins under Elo Knight and Sacrileges with Asher Elias as the FC.  I always roll with Asher when I can, so I got into my fast clone, into a Guardian, into the fleet, and into the logi channel.

From there we moved out and headed south, using the Ansiblex network. 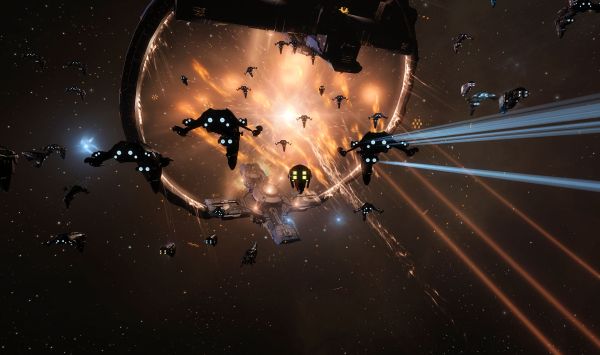 When we ended up in XZ-SKZ in Period Basis I thought perhaps Legacy was making another push for the system.  But we did not linger there, turning instead to the CJF-1P gate and the Stain region.

We burned through Stain for a while, reaching a Fortizar with a titan sitting on it.  We did not having docking rights and could not tether, but the Avatar hanging there on tether next to us did not seem to mind our presence.  We were told to get in range.  The logi channel was confused for a moment, because you don’t cap chain on a structure… unless you can’t tether.  So the cap chain went up slowly as people figured out the situation.

We were then asked to temp blue a few groups, who happened to represent some of the Stain locals, like Pen is Out, Good Sax, and Ferrata Victrix, the latter standing out as a name that isn’t trying to be a sexual reference.

I had heard that we had been working with the Stain locals.  They are not our friends, but they really don’t like TEST for whatever reason and TEST has been returning that as they pass through Stain to attack us.  So we have been cooperating with them at times, and tonight we were with them.

The titan joined our fleet and bridged us off to our destination.

There we landed on another Fortizar, this time in 4GQ-XQ, which did allow us to dock and tether, though people in the logi channel chained up because it was assumed we would not have rights.

The Fort also had a timer counting down.  This was our objective, defending the timer.

I was kind of amused to see the name Against ALL Authorities.  We were fighting them down in Delve back in 2012.  I wasn’t aware they were still around, though I guess organizations rarely die in New Eden.

We hung around on the Fort for a while as the hostiles started showing up.  Much to our surprise, an Erebus appeared on their structure in system.  There was speculation as to whether they meant to jump or jumped instead of bridging.  But Asher, seeing a possible opportunity, warped us straight to the cyno and bubbles went up to hold the titan in place.

It was not to be.  The hostiles got their act together and started bridging in as we formed up.

Erebus in the mix

That turned into a brawl on their structure and things were pretty busy for a bit for logi as the two side started trading blows.  Things were happening fast yet slow… tidi was in full effect… so I was both in a hurry to lock people up who were broadcasting, yet often had a lot of time to look around while that was happening. 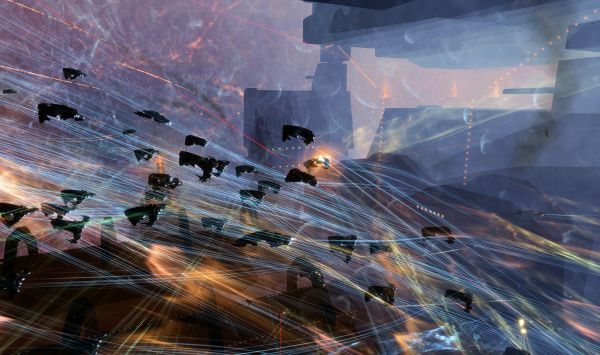 A Sac in the pack starts to explode

I was able to rep a few people, with my big save being Kappa Hutt, one of our boosters, who I caught with reps when he was well into structure.

All reps on Kappa

Things were complicated when we were hit by a cap bomb that drained everybody’s power.  Logi in the cap chain were able to keep going, but we were slowed down in getting out of the bubbles as most of the Sacrileges had their MWDs shut down.

Getting out of the bubbles

That meant apply cap to the Sacs that were falling behind.  There is a plan for that, but it took a while to get cap to them and everybody out of the bubble, at which point we disengaged and warped back to the Fortizar.

Our losses were not all that much, considering how deep we got into things.  We were able to tether up and repair while the Fort itself repaired.

The objective, saving the Fortizar timer, was accomplished.  But there were still almost 1,500 people in the system, and when some capitals dropped on grid with us, we ran out to see if we could grab something.

Caps on grid with us

That did not go our way as reinforcements arrived to support the caps.  Asher had us align out and warped us off, but there were bubbles up and not everybody got out, including both of my cap chain buddies, who were soon in pods.  I did, however, get reps on Kappa Hutt, who continued to attract fire as a booster.

From there it was back to the Fort.  The hostiles did not seem content to call it a night, so nobody was going home yet.  Tidi was still running high whenever we clashed and, me being me, I was in full graphics mode and was very happy to be running the 64-bit client given my memory usage. 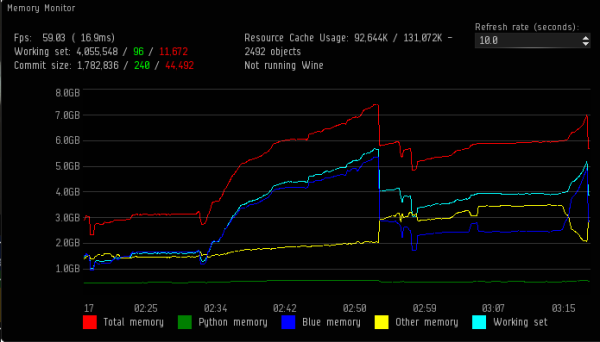 The graph from the control-alt-shift-M readout

A Thanatos carrier landed not too far off the Fortizar.   We moved to meet it and it was quickly tackled and killed.  But a new brawl opened up at that point.  We were anchored up, but things started to go badly in the logi channel as hostiles warped in and started targeting us.  We shed almost all of our logi in fairly short order.  I was left in a capsule, ship destroyed, as the fight carried on. 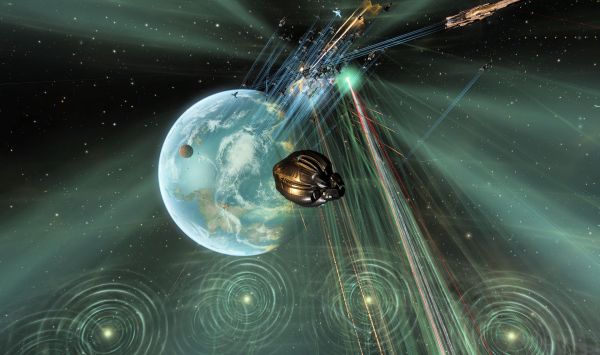 In a pod as the fleet moves on

I dropped out of the chain channel, announced my demise in the logi channel, and then dropped fleet to keep from holding down warps to capsule speed.

There has been something of a prohibition on killing capsules at times in order to keep people from re-shipping and returning to battle quickly, which is the only reason I can explain the fact that I was left alone.  (We were far enough away that there was no way I was going to re-ship and return.)

With nothing else to do besides watch, I docked up and grabbed an Ibis.  I then undocked and started going after a few of the hostile ships that were close by.

Ibis on a rampage!

I was able to get in a few hits before somebody noticed and blapped me.  However, they once again left my pod alone.  So I motored back towards the Fort while my aggression timer counted down.  I was going to dock back up and do it again.

And then the person gunning the Fortizar turned on the point defense system and nuked my pod.  I suppose I should have tried to get out with my implants, but I was so far from home that it seemed unlikely.  Oh well.

At that point I was back in 1DQ1-A and could only listen on voice comms to what was going on.

The battle report shows we paid a price for winning that timer. (Alternate report if you like that other style.) 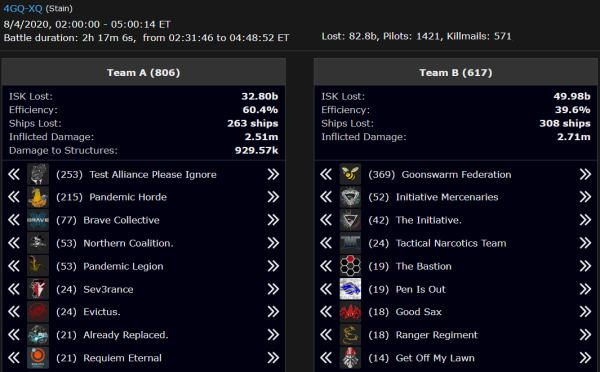 It wasn’t a complete wipe for us, but we clearly came out on the short side on the ISK war.  But the war goes on.

Some additional pictures from Lazlow Jones.