We had been up to IGE-RI late last week, when Asher led a Ferox fleet to try and defend the armor timer against PandaFam’s carriers and subcaps.  That went well.  Even though we lost the objective we managed to blow up fighters and subcaps by the score.

And we were told we would be doing something for the final timer, which was set to come due this past Sunday around 19:00 UTC.  So I made sure to be around and logged in as the time drew closer.

And then the time hit… and passed… and no fleet was called.

There was a ping for the INN stream on Twitch, where DBRB would be covering the destruction of the Keepstar.  Its destruction was never in doubt.  But it didn’t seem like we were going to do anything to drag out the event and make the enemy pay a bit for that kill mail.

Finally, about ten minutes after the hour, there was a ping.  A fleet was going up on Jay Amazingness with no details save to read the MOTD.  I had wandered away from my desk for a bit, but when I got back I joined the fleet.  The MOTD said we needed to be able to fly a tech II Cormorant and that we should take a travel interceptor to the IGE-RI Keepstar, where ships would be handed out.

That I could manage.  I had an Ares handy, so undocked with it and headed towards the Keepstar up in Fountain.  The way was clear… it generally is in an interceptor… and I arrived in the system.

It seemed that somebody used the fight notification tool this time around, as there was no tidi until I jumped into IGE-RI itself, a sign that it was on its own node.  And there was some tidi, though not much, as the event had already started.

Everybody docked up and Jay started trying to hand out ships to people which, under tidi, was apparently quite a painful process.  He eventually dispersed some of the Cormorants to other people to help him hand out.  I got mine and immediately put my loudest SKIN on it. 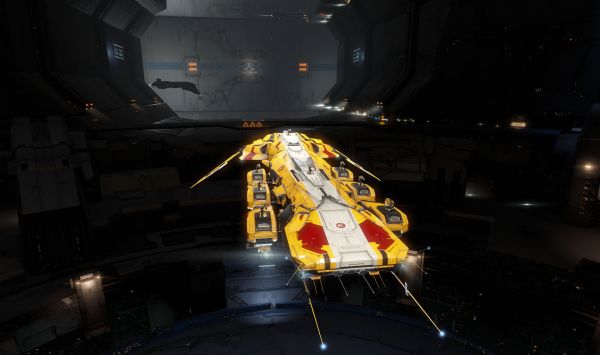 Fresh Corm in the hangar

We loaded up scripts and ammo and undocked to face the attack.  And it seemed like everybody was there to join in.

The NPCs even showed up

As with the Ferox fleet, we started by shooting some of the fighters that were on the Keepstar, though the tidi was making the game respond oddly.  Distances in my overview didn’t seem to bear much resemblance to where the game thought things were.  I was trying to target fighters that were alleged to be only 35km away, but was told they were beyond the 115km targeting range of my ship.  But they were clearly there on the Keepstar.

And the game itself went through points of pausing and then resuming, which I thought might be just me, as I had graphics turned up so the game client’s memory usage was… high. 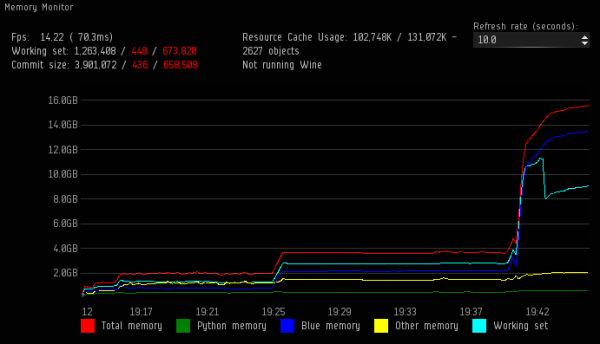 Not possible without the 64-bit client

But other people were calling out that the game was stalling at the same time I was seeing it, so I suspect the server was having its own rough time.  And the fight carried on around the Keepstar. 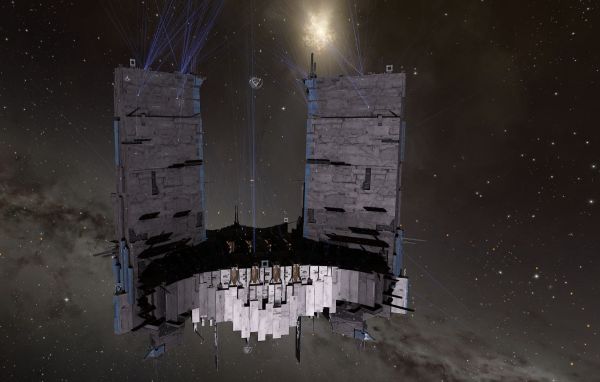 Blue beams from fighters or drones

We fought for a bit, though not very effectively.  Corms are not Feroxes.  And we had to warp off every once in a while to get out of the way when they wanted to fire up the Point Defense System to kill any hostiles too close to the structure.  The PDS is indiscriminate, so you have to be away or tethered to avoid it.

We got to see the Arcing Votron Projector, the Keepstar doomsday, go off a couple of times. 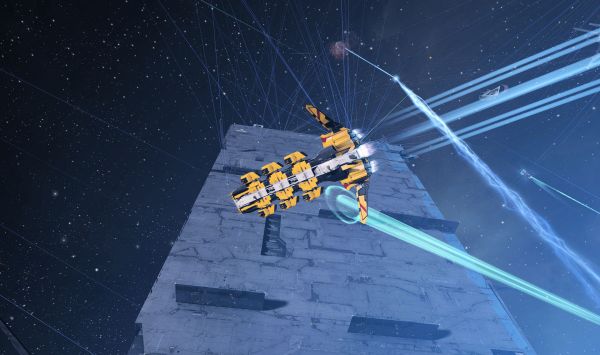 The beam reaching up to some unseen hostiles

But we were not making much of a difference.  After one warp off grid, we were aligning back to return and it was decided that the end was close enough that we should all make sure to lock up and shoot the Keepstar at least once before it died so we could all be on the kill mail as well.  The fleet warp came and off we went.

And then we stopped about 300km off the Keepstar, looking like we were tethered… though at extreme range… somebody’s code though we were some place much closer I bet… and couldn’t figure out what had gone wrong. 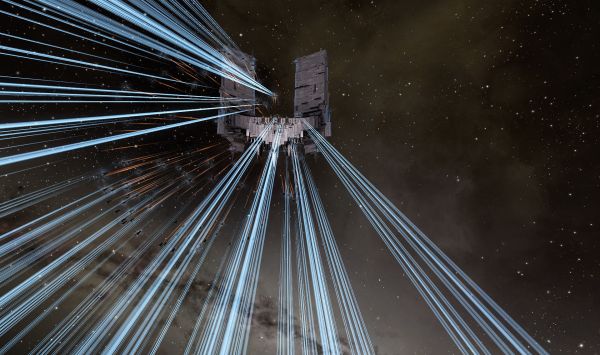 Way off the Keepstar, but looking like we’re tethered

Then somebody spotted the Sabre on the overview and the client caught up and drew the warp disruption bubble in which we had landed.

We had been caught and the trap sprung.  A set of Chemo doctrine ships… smart bombing Lokis… landed on us and lit us up.

The smart bombs going off around us

You can see we had enough time to turn around to try and get out of the bubble, but the Sabre was ahead of us and kept us from warping off.  And in the middle of the Lokis was Pittsburgh2989, one time Imperium FC who was kicked out and blacklisted from the coalition for reasons still argued about.

Pitts comes to kill us all

A few people got out.  My ship was very slow in blowing up.  It took the client view quite a while to catch up with the situation as it stood.  I tried to motor out in my pod.  If I could just get out of the bubbles and warp off, I might be able to grab my interceptor… which cost about 10x that of the Corm… and fly on home with it.

Pod with wrecks in the background

Alas, they picked off the pods as well.  I was soon back in 1DQ1-A, and shortly thereafter I got a notification that my stuff in the IGE-RI Keepstar was being moved to asset safety.  I guess I will be picking up that interceptor another day.  At least the Cormorant was free… and I insured it, so made a little bit of ISK on the side.

The Keepstar was destroyed.  My ship was blown up.  My pod was killed.  My interceptor was stranded. And the battle report showed that we didn’t even extract much of a price this time around.

All of that was very much predictable.  But what I really want to know is if anybody looted the PLEX out of my cargo hold.

For whatever reason my interceptor had 1 PLEX in the cargo, and before the fight I moved that over into the Corm’s cargo bay.  If you look at my kill mail, you will see that the loot fairy said “yes” and the PLEX survived and was in the wreck.  Maybe somebody got it.  Or maybe the smart bombs killed the wrecks.  I’ll likely never know.

The August update sees another round of module tiericide arriving in New Eden.  This time armor plating and membranes are getting a rework. 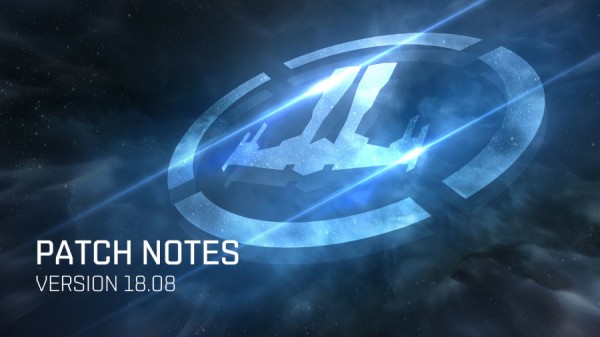 That translates to August 2020

For this update, the following naming schemes are being put in place.  For the overall group:

In addition, the following naming changes have been made:

The Storyline meta group was missing EM and Explosive resistance modules. Two new modules were added to the game:

Two obsolete modules have been removed from the game:

And, as it goes with tiericide, all of the modules have been realigned so that their attributes conform to a standard pattern.  The list of changes is very long.

Aside from that, the patch notes have only a few minor fixes or updates.  One that stands out to me is:

That will probably make life a bit easier for those supplying staging points in support of wars and such.  Anything that makes the supply line a bit easier to maintain is probably good.

Oh, and if you’re doing the invasion event and playing for the Triglavian team, you might want to be aware of this change:

EDENCOM is no longer looking the other way traitors!

Downtime appears to be over and the update deployed.  Now to get the Pyfa update and revise any armor tank fits you have in text, since tiericide and renaming almost always means you need to fix something.  The patch notes with all the gory details are available here.