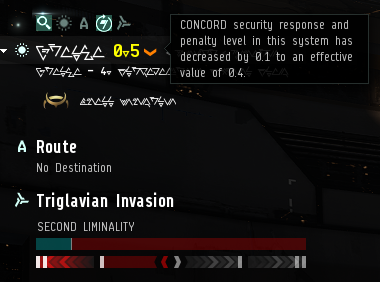 I had not been paying much attention to the Triglavian invasion event.  New Eden is a big enough sandbox that I can play in my own area and not care about what was going on in high sec.  Delve is many gates from the nearest high sec system.  Also, the war.

And then Niarja became the next Triglavian target and everybody lost their minds.

Niarja is a 0.5 high sec system known primarily for two things; being a prime spot for suicide gankers and being on the direct trade route when traveling between Caldari and Amarr space in general and the trade hubs of Jita and Amarr specifically.

When the Triglavians take a system, the security status of that system drops by 0.1.  That change would drop Niarja to 0.4, making it low sec and turning it from a place to suicide gank to a place to simply gank people passing through as CONCORD responses would no longer occur.

Meanwhile, the “safe” route from Jita to Amarr would go from 10 gates to 46.  I am not sure how much trade is specifically between those two points and how much of the traffic is from Jita to points beyond Amarr, but either way Niarja looked to become another low sec danger spot on the shortest route between regions.

The forces of chaos, in which I include CCP, seemed quite eager to see Niarja fall.  Others seemed quite angry at the prospect.  At least one group was sending out mail messages in game warning people that they had better not get caught supporting the Triglavians. 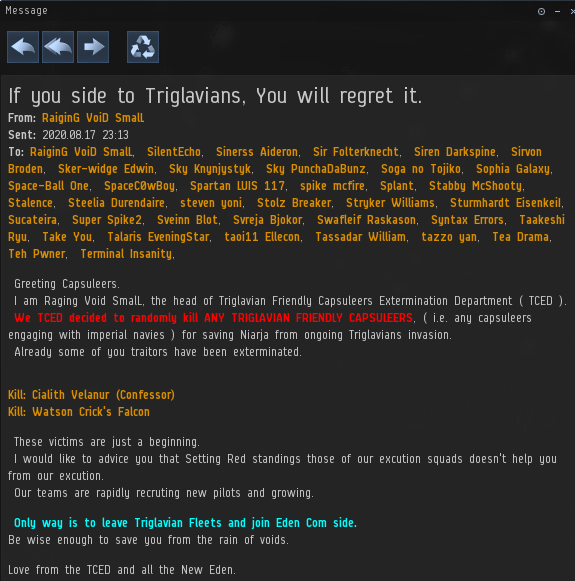 I am sure that was just some fun role play.

Early yesterday Legacy Coalition declared that they were going to protect high sec by siding with EDENCOM to make sure the Triglavians didn’t take the system.  Dunk Dinkle of Brave posted a truncated image from what looks to be a Discord message that said:

THE COALITION DIRECTIVE IS TO SECURE NIARJA

Addendum: The Discord message in full:

[This message is apparently what set the Imperium in motion, the opportunity to harm the people attacking us.]

At some later point Vily posted elsewhere that the coalition had just decided to fight the Triglavians because the Imperium had sided with them.  World War Bee was coming to high sec.

To my knowledge, up until then, there had been no official effort by the Imperium to influence the events in Niarja either way.  Word later came out that incursion squad had gone there on the down low to push things in favor of the Triglavians.  But once Vily reacted it became an official Imperium operation.  Pings went out to get people to pile on for the Trigs. [TEST never did show up for the event despite Vily’s post.]

Once I saw that was going on, I logged in a high sec alt just to see what I could see.  The gate to Niarja was suitably adorned with the Triglavian logo.

A new sheriff is in town

Inside the system, the battle was tilted towards the Triglavian side. 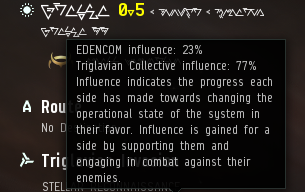 77% in favor of the Triglavians

Ashterothi, who was providing status updates on Twitter, reported that the Trigs had been as high as 85% at one point, but EDENCOM had slowly worked that down into the 70s.

Some sites from the probe scanner window

I was not on as an Imperium character so couldn’t join their fleet, but I spotted them and watched them take down a couple of the EDENCOM sites.  (I also saw a Brave group shooting up an EDENCOM site, and I am not sure what was going on there.)

It was already late for me and I wasn’t going to be able to join in so I docked up at one of the Raitarus in the system.  The Triglavians seemed to be edging up every so slightly as time went along, but it was going to take some time.

When I work up this morning however, I logged in to check and found I was in a low sec system.

The Triglavian sky is strange

The Mittani was smugging about having cut the high sec travel route as it apparently impacts Legacy and their own ability to resupply.

Broke the galaxy in half today, because fuck you, that's why~ #tweetfleet #eveonline pic.twitter.com/UMnDBbB62b

Meanwhile, the battle for the system carried on and the Triglavian side hit the final luminality.

EDECOM gives up at this point

Niarja is effectively a null sec or wormhole space system now in terms of security status.  That doesn’t make much difference to haulers, as low sec status was going to keep them away in any case.

In the short term I will be interested to see what this does to trade.  Does making Jita 30+ jumps further away make Amarr more valuable?  Does it grow as a trade hub out of Jita’s shadow?  Or was its proximity to Jita what made it the second trade hub?  Does Jita shrink?  Does this help Hek, Rens, and Dodixie, the lesser trade hubs?  What happens to the market?  What happens to shipping charges?  There is a lot there to unpack.

For the longer term I am back to wondering what CCP’s end game plan is for the Triglavian invasion.  It was a happy fun PvE event for quite a while, but now with more and more high sec systems falling to the Trigs (The Agency says 16 systems are now in final luminality) what is going to happen?  Will the Trigs remain and their systems be changed for good?  Will they reach some accord with the empires and become the fifth empire?  If there is a fifth empire will Max Singularity and the Sixth Empire demand some high sec space of their own?

CCP has never run an event like this in high sec.  In the past high sec followed the rules of TV sitcoms, where things can go crazy for a bit, but at the end of the episode the status quo must be restored.  It will be interesting to see if they want to return to the way things were or have a new long term state of affairs in mind for high sec space.