After we lost the Keepstar in O-PNSN on Thursday, eyes turned to the next target, the Keepstar in KVN-36.  The armor timer was set to come out a day later, so both sides were ready to form up to contest that.

Again, the battle was going to overlap a bit with work, so I pre-positioned another ECM burst interceptor so that I could join in when time allowed.  I saw pings and people forming up long before I was able to get in.  But Kun’mi had another little ECM burst fleet going, so once I had the time I logged in and undocked to join in.  I caught a warp into the fray almost immediately, landed in some hostiles, and got tackled.  I set off my ECM burst, but couldn’t get away.  My Ares went boom on the first run.

The hostiles were good enough to pod me though, so I was quickly back in 1DQ1-A where I grabbed my back up ship, a Malediction, and headed back to the fight.  As always, since tidi was slowing the fight down, very little happened before I got back.

I made a perch off the Keepstar and rode the warps as Kun’mi launched us into the hostiles fleets.

Aligning out from a run

The hostiles were running the same basic plan as the day before.  They had an Astrahus on grid with the Keepstar where they had tethered up their carriers.  Those carriers disgorged a mass of fighters to attack the Keepstar.

Meanwhile, the subcap fleets from both sides set to shooting each other, while we zipped in and out trying to avoid getting tackled.  Being hit with the ECM burst is annoying, I know this from having been on the receiving end a few times, and the enemy put a lot of effort into tackling and blowing us up.  No doubt each kill gave them great joy.  But we were close enough to home that the few of us in the fleet would just re-ship and fly quickly back.

There was also a lot of smart bombing going on.  We had some success the day before the a Praxis fleet set up to smart bomb, and the hostiles picked that up as well, so there were smart bombs going off all over it seemed. 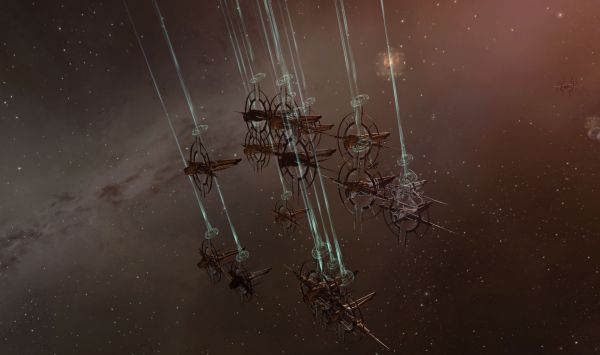 The Praxis fleet from the day before

Both sides seemed to using them with impunity.  You can dig though kills and find ships that have smart bomb damage from both sides.  And, of course, some doctrines, like the Feroxes, are not smart bombing platforms, but carry one fit.  So it was a hazard and I had to warp off to repair a few times after flying into smart bombs.

Things seemed to be going with the attackers.  They had quickly stopped the repair timer and had been steadily whittling away at the armor layer of the Keepstar.  We kept doing our runs and our fleets in general tried to slow things down.

Another run in my Malediction

However, the system seemed more laggy than the day before.  Commands were slow, especially when close in with the Keepstar, even though there were not as many people in system as we had seen in O-PNSN.  But both sides persisted.  It is just something you put up with and power through to win the objective.  Then things got really balky and unresponsive and, suddenly, boom!  We were all kicked out of the game.

That happened to coincide with Dave Archer’s Jackdaw fleet getting smart bombed by NCDot, which seemed like it was going to wipe them all out.  Kun’mi happened to be describing this action to us and the likely fate of the Jackdaws, and that was the moment when the server died, and so became part of the lore of the battle.

Of course, we all tried to log back in, but the server wasn’t having us. 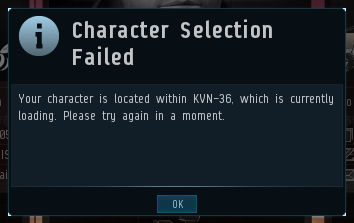 CCP tweeted out a link to a forum thread about the server going down.  They were aware and working on the situation.  That was at about 21:33, so they jumped on that pretty quickly.  Meanwhile, both sides were anxious about what was going to be the state of affairs when the server came back up.

In the past, servers going down meant tough luck to one side and a saving grace to the other.  I lived through the null sec era of server killing battles.  I remember back in Fountain War at Z9PP-H when CCP remapped the node incorrectly and dumped everybody out, effectively saving the TEST capital fleet.  I have posts about other crashes, like the one at HED-GP and the one at KW-I6T.

But that was all quite a while back.  And the ability of servers to handle such loads have gotten better over time.  The X47 Keepstar battle kept going despite a ton of ECM burst ships and a DDoS attack in progress.  There were about 6,000 ships involved, with fighters flying all over and all the other usual stuff, during the so-called million dollar battle.

There was also a bit of the Imperium institutional paranoia about the situation, a worry that this time, when a crash would benefit Goons, that CCP might try to roll back the clock on the timer rather than let things ride as they had traditionally done.

We had about a half an hour to think about that.  CCP said the server had been stood back up at 21:55, but by the time I got in and made it back on grid with the Keepstar… everybody had been warped off grid… it was 22:01.  And there I saw the Keepstar timer had just a little over two minutes on the clock.

Given that first screen shot at the top of the post, taken at 20:55, showed 13:37 (leet!) left on the timer, it looked like only 12 minuted had counted down during the approximate half hour that the node had kept us out, though the node was down and presumably not advancing the clock for part of that time.  The downtime didn’t save the Keepstar completely, but the time left was so small that it ran down before the attackers could bring firepower to bear on the structure.  Keepstar saved. 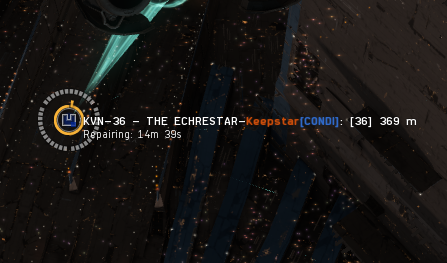 You see a repair timer there, but you’ll notice the damage indicators for the armor and shields were set back to their pristine state.  The objective had been won, with some help from CCP. 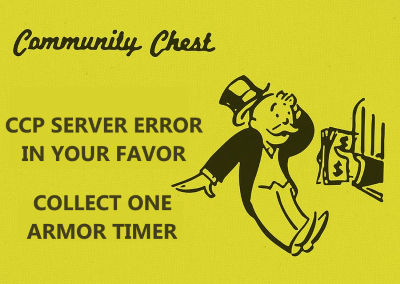 We drew the card this time

Of course, recriminations were flying long before the servers came back up.  Everybody was looking for somebody to blame.  In the forum thread about the server outage somebody was trying to pin the blame on those Goon ECM burst interceptors, which made me laugh.  If there were even a dozen operating at once I would have been surprised.  We had about eight going at our peak when I was participating, and that isn’t enough to cause much of a problem.  It certainly didn’t break the server during the last fight.

There were also fingers being pointed about who was running their smart bombs, though both sides had them deployed.  Memes were being thrown around and Cryo, the official Imperium propaganda artist these days, even threw together a special piece for the occasion.

The smug is palpable

Meanwhile some people on /r/eve are claiming that the server crash was deliberately caused by “hundreds” of Goon smart bombing ships or ECM bursts or a Goon DDoS attack (evidence?) or anything else that their vivid imaginations could churn up, because Grrr Goons.  Some things never change.

I personally don’t buy any of the finger pointing about the crash being an intended goal.  We had more load on the server in the fight the day before and it made it, though at times things were marginal.  (Note the problem I mentioned with my UI when I returned to the fight.)  Sometimes things just fail.  We should probably be surprised that this doesn’t happen more often given how much load we put on the servers.  And nobody is going to stop using smart bombs, or ECM bursts, or masses of fighters on either side, so it seems like it will happen again during the war.

Anyway, the battle wasn’t over yet.  Everybody was back on grid and there were people to shoot, so things kept exploding for quite some time.  Kun’mi had lost his probes, so we just warped in on wrecks when we could.

Another run into the mix

I did get a couple of bursts off, but eventually got tackled again.  They put everything on me they could. 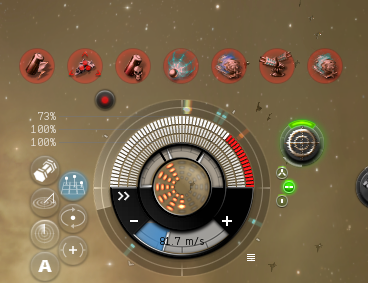 A range of effects

From left to right I believe I was neuted, painted, nos’d, webbed, scrammed, tracking disrupted, and pointed.  I like the tracking disruptor.  Some zealous pilot in a Cruicifier hit me with one on a few runs. (So did somebody in an Eagle, though why they didn’t just shoot me…)  Pity it doesn’t do anything to an AOE weapon.  It will get you on the kill mail however, and that is the important part for all of us.  I got my ECM burst off before I blew up, and was then able to warp off in my pod before the parade of effects were able to land on me again.

After that I docked up and waited around for people to clear out.  I didn’t pad my kill board as gratuitously as I did the day before, but I got on my share and didn’t even get on any blue kills.  A rare thing with the indiscriminate ECM burst module.

This time around, with no structure loss weighing us down, the battle report fell in our favor.

Plus, we won the objective.  PandaFam has to start over again by setting the first timer again, which they did not bother with.  They will likely want to set it to fall in EUTZ where they are stronger.

So it goes.  They still have four Keepstar kills in the bag and two more left to kill in Fountain before the fun starts in Delve when supers and titans will start being part of the mix.  I think they only have a few dozen there to kill.  At a rate of about one or two a week, this could take some time.