As for the ‘give us an old version of LOTRO’ thing – my answer is the same as always: why unfix all those bugs? You think it was perfect back then, but I remember our bug queues at the time and I can assure you it was not. Thirteen years of bug-fixes just disappearing? Yikes!

There is in some of us, myself included, a longing for the “good old days” of a particular game.  That isn’t so hard to find when it comes to single player games.  I have enjoyed a return to Diablo II on its 20th anniversary. 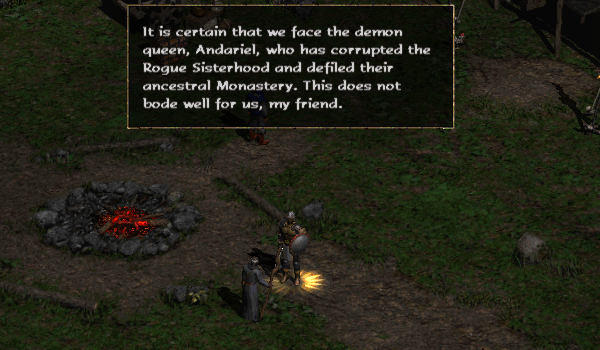 Back with Cain and his tales again, basically unchanged in 20 years

But when it comes to MMORPGs, which are as much a service as a game, a service that must exist within a complex and changing ecosystem, and which host players in a shared world that is being constantly fixed and updated, it becomes problematic to reach a state where the “good old days” can be achieved.

SOE, and then Daybreak, have been playing the nostalgia card for well over a decade with EverQuest by rolling out servers where the content is restricted and unlock by expansion and where they have tinkered with the xp curve and mob difficulty.  But purists rightly argue that this doesn’t get you back to 1999 as so much has changed in the game since then.

LOTRO likewise experimented with that a couple of years back.

Even with WoW Classic, where Blizzard spent time and resources creating an experience very close to a point in 2006 gets criticism for some of the compromises they made in order to ship a product that would be viable in 2019.  It is very close to the 2006 experience, but it is not perfect.  Even I can spot a difference here and there.

Creating the exact early game experience, while maybe technically possible, does not seem practical and, in some ways, problematic.  As the quote at the top asks, do you re-introduce bugs, some of which can be quite annoying, merely to get that first day feel?  Does fixing those bugs invalidate the experience?  And how does all of that interact with current operating systems?  In the case of LOTRO I was running on Win XP when it launched, an OS that was already starting to get a bit long in the tooth and, even skipping Vista and Win 8, I am personally still two operating systems down the road.

And what is the experience true to in any case.  I’ll bring out another salty old quote:

The problem is two fold.  Due to changes in technology and the infrastructure around games, it isn’t likely you can set foot in exactly the same game you did back in 2007, or 2004, or 1999, or whenever.  Too much has changed.  If a company with all the resources that Blizzard has cannot get there without making compromises, small studios like Daybreak or Standing Stone don’t have much of a chance.

But you too have changed.  Even the forgetful, like myself, cannot be surprised anew at everything in a game.  There are too many memories of what happened before, too many blog posts, too much information on wikis and news sites to possibly be able to approach a game as you did back in the day.

The best you can hope for is a good time that in some way reminds you of how you felt back in the day, an experience that revives memories and makes you feel good.