It has been three weeks since CCP unleashed metaliminal storms on null sec space and… well… there they are.

I still haven’t come up with an answer as to who this feature was aimed at.  I remain convinced that the upside of any of the four storm flavors are so tepid that avoidance will be the primary response to them.

And if you open up the in game map… new or old… and set it for storm tracking, you can see seven storm blotches hanging about in New Eden.  The current locations and storm types are, going clockwise from the top: 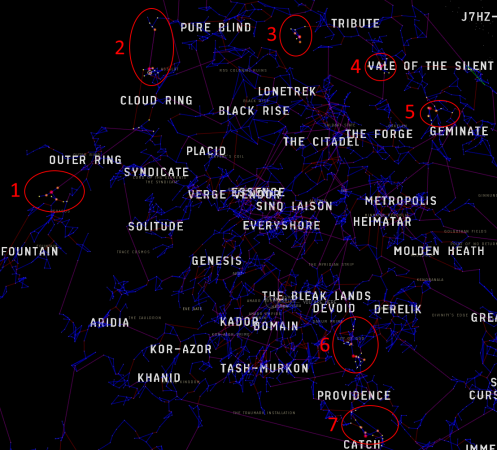 If that storm in Tribute were over in Pure Blind I might guess that storms are attracted to null sec regions that kind of suck.  I am not sure what Providence did to deserve two storms… I mean, aside from being Provi I guess.  And the storms in Fountain and Cloud Ring are close enough that they overlap in a system, so you can get both exotic and electrical effects in one system for now. 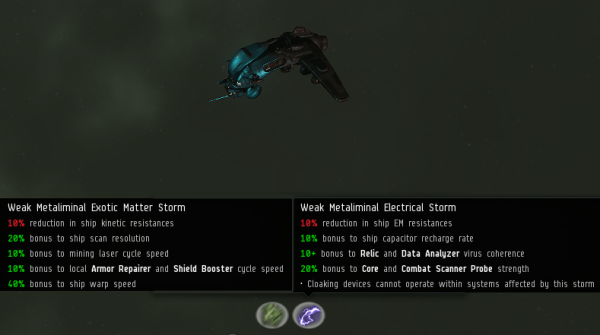 Dual effects, some cropping to show them both, in QXW-PV

As I went to check on each of the storms… I flew to the eye of each one… I did notice that there were very few players hanging about.  North Fountain was an exception, as I think some of the new neighbors were trying to move in.  But for the most part, the systems where there were storm effects were pretty empty.

That, however, doesn’t really prove my hypothesis, as most of the systems I flew through in between the storms were also pretty empty.  Tribute and Vale have a lot of very low ADM systems.  So, I suspect I’ll have to wait until a storm brews up some place more populated if I want to test the avoidance theory.

One of my other worries does seem to be confirmed.  A few people dismissed the idea of the storms because CCP said they would move a gate at random every 24-48 hours.  So, in theory, three weeks down the line, that first storm that started in KBP7-G in Providence could be as many as 21 gates away by now.

However, as I figured, random movement, especially in pipe systems, might also end up just moving back and forth over the same stretch of space for an extended period of time.

So that first storm has made it all the way to YWS0-Z, just two gates from where it started three weeks ago.  This does not surprise me at all.  But it does indicate that you cannot count on a storm moving away on its own.  It might just linger for weeks at a stretch.

CCP did not mention whether or not storms would have a specific duration, if they would die out on their own of just persist for all time, like a Triglavian system in its final liminality.  One might imagine that storms would brew up and fade away over time.  But one might also imagine that CCP could create a usable in-game map after 17 years and we know how that one has played out.

At least, for now, the storms are stuck in place few people care about at the moment.

Addendum: EVE Scout has a Storm Tracker page up now if you want to know where the storms are.