It is currently GM Week in EVE Online, where some of the staff come out and mix with the players and run special events.  There is a list of things going on this week.

The best item on the list… my opinion… is the whack-a-bot.  It takes place in Yulai at the graveyard beacon… you can read about the Yulai Graveyard here… where CCP teleports in ships of people they have confirmed are botting, flag them as suspects, and lets everybody shoot them.

This has become a popular event since it started, so when I took a break from work to slip over in an interceptor to take a peek, I wasn’t surprised to find a crowd in system and time dilation kicking in.

In the middle of all of that were several Praxis battleships… there is one in the top middle of the screen shot above… and they started using smart bombs… area of effect weapons… in the crowd.  Smaller ships started blowing up right away.

The scene now lit by explosions

I was in the midst of this and was taking a bunch of damage.  Looking at what I had fit, I decided to set off the burst jammer just to hit back and maybe get on their kill mails.

Being in high sec space, this was a bad idea.  I was now a suspect as well.  And, while one of the Praxis pilots got the kill mail, 40% of the damage to me was done by CONCORD.

Somehow I managed to get my pod out of the scrum and docked up in the nearest station.  I clicked the “Board my Corvette” button… I still don’t like it, but I know what it does… and undocked, ignoring the warning… the warning that I still had a timer and would be shot if I undocked… which promptly happened.

I had that and a bunch of kill rights on my character.  It was time to log them off and try somebody else.

I grabbed an Alpha Clone character I had in Jita who happened to be in a Tristan.  That seemed good enough, so I took the direct route to Yulai, eleven jumps including a few through low sec, and made it to my destination.

Along the way I set up an overview for just capital ships.  Being in high sec meant that my usual settings, which show everybody not blue, meant that the overview was pages long since most everybody on grid was neutral.  People from null sec often get a little freaked out when they wind up in high sec space again.

Being a little more wary on my arrival, I warped to the graveyard beacon at 30km.

I had missed the early bots, the carriers and the rorquals, but I was there in time for a pair of super carriers, a Nyx and a Hel.  The Nyx was the closer of the two, those still outside of my 48km lock range, so I started to motor in that direction to join in on the kill.

Fortunately my Tristan has an eclectic fit.  Generally a drone boat, I had fit guns and a target painter to it at some point.  The target painter was key.  The guns were short range and drones can be slow and vulnerable to smart bombs… you can see a Praxis still in the Nyx screen shot… but a target painter can reach out as far as you can lock a target and counts and ewar, so gets you on the kill mail.

So I happily painted the Nyx as I turned to get in range of the Hel.  The Nyx was not long for this world.

The Nyx begins to brew up

I got within range of the Hel and put my target painted on it, then decided I could spare a drone, so sent one of mine out to do some damage as well.

The Hel getting Hell

The Hel was not long for this world either, but even as it started to come apart, the grand finale appeared on grid with us, to Avatar titans.

Hel in the center, flanked by Avatars

This was what everybody wanted, to be on a titan kill.  After nearly nine years in null sec I have only been on 11 titan kills, seven of them at B-R5RB and another four at Asher’s trap in Okegaiken during the Casino War.  That is just two opportunities over all that time.  So everybody was keen to get on these two. 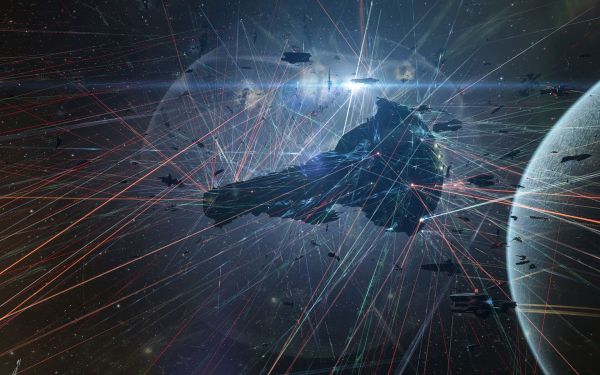 A sky full of beams

And the show go even better.  They may have both been botters, but one of the Avatar pilots was at least close by his keyboard and realized what was going on.  If he was going to lose his Avatar, he was at least going to get on a titan kill mail while he was there, so he unleashed his doomsday on his fellow victim. 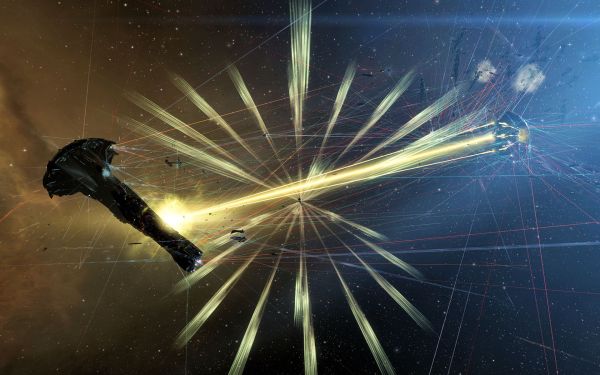 You have to give them points for style and putting on a show as everybody got to see the new Avatar doomsday effect.  (I got to see it on the test server back in April, but it is still pretty cool.)

But the masses were wearing them both down.  First one Avatar exploded. (The doomsday got the other one top damage.)

End of a titan

Then the other one gave up and started to explode as well.

My Tristan flies by as somebody shoots fireworks

And that was the end of the show.  It was some fun, and I am sure some people got to see a few ships they hadn’t run into before… on the field as well as among the botters.

While I had the UI off for a lot of the time, I spotted local getting into the 1,800 player range, which meant that time dilation was in effect for much of the event.  The game slowing down drew a lot of complaints in local chat, which I found pretty amusing.  CCP even posted the CPU usage chart for the event. 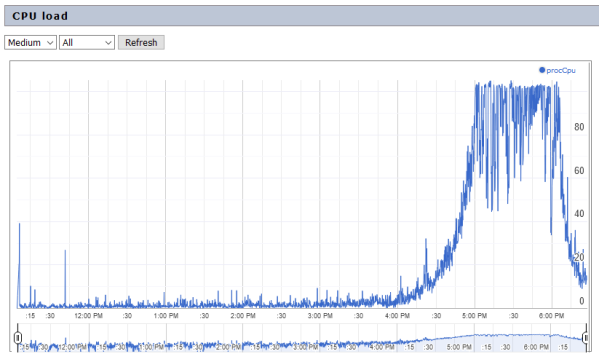 A lot of load there

For a big null sec battle, like the fleet fight we had on Sunday or any of the contested Keepstar timers in Fountain, this was nothing.  A mere slow down of the game.  The UI was still responsive and I didn’t feel the need to open up the command queue to see how long it was taking for things to get through.  So my own reaction to local was: 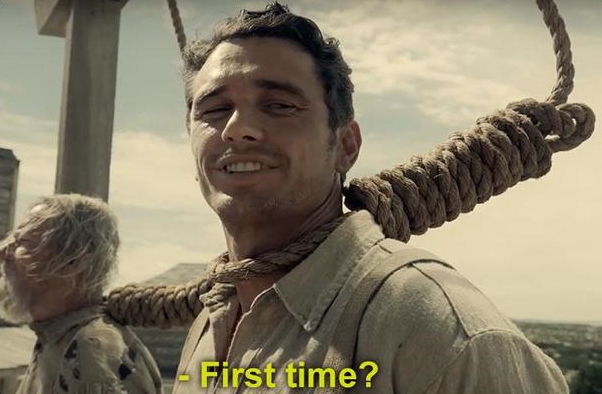 But if you’ve never been in a null sec fight, I guess this might have seemed pretty bad.

So now I have an Alpha Clone character that I almost never use with two titan kills under their belt.  Oh, and my first alt, the one who got smart bombed and then set off the ECM burst, they will have to stay docked up for a while.  That burst jammer lit up enough people that my alt earned a page full of kill rights against them.  I’ll just have to wait the 30 days for those to expire.

Others at the event: