In my brain Diablo II ends with Act IV.  I mean, you kill Diablo, whose name was on the box, just like in the original, you feel like you’re done.  So once that was done, my arrival in Act V and the town of Harrogath, home of the barbarians, felt a bit strange. 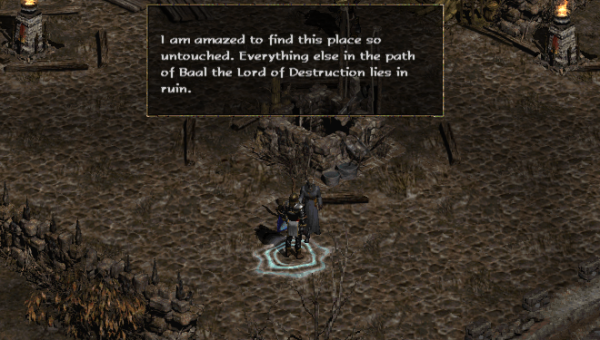 Deckard Cain is always there waiting for me

That isn’t to say I am knocking the Lord of Destruction expansion.  It brought a lot to the table, like new classes and the coveted upgrade from 640×480 to 800×600 video resolution.  But the actual content… it only stuck with me in a very vague way.  Something about being in ice tunnels and catapults… though that latter might have been from Diablo III, which itself is already eight years old at this point.

So I just headed out the gates to see what I could see.

Cain’s words about Harrogath being untouched only apply to inside the town.  Just outside are the armies of hell who have the place under siege.  And there were catapults to destroy, so I did at least remember that bit.

You only get the first quest at the far end of the first zone, once you have cleared enough stuff out.  Then it is back to town for an update and a plea to go into the next area and release captured barbarians.

The next zone is more of the same.

I will say that the zone tiles were all new, so it wasn’t a repeat of any of the last four acts.  And there are new mobs, some new mob mechanics, and all that, but I wasn’t feeling a lot of attachment to it either.  That may be due to the new zones being somewhat sprawling in an aimless sort of way.

I freed the barbarians, the reward for which was the ability to put some sockets in a piece of gear.  I bought the highest armor class piece of chest armor I could find, put sockets on that, then put two runes in it, which ended up being the last item upgrade I did during the game.

My memories of Diablo II don’t include crap itemization and drops, but here I was in Act V and I was still wearing a couple of items from Act I because I had yet to find anything better.  And I think the most recent piece of gear was from Act III.

Basically, there isn’t any feeling of planned gear progression.  Some of the stuff at the vendors gets better as you level up, but not radically so in most cases.  My rogue companion had a very good bow with two sockets that I picked up in Act II and I never once saw anything better drop or show up at a vendor.

My stash was overflowing with gems and runs and whatnot, just waiting for a good item to use them on, and I got nada.  I complained about pre-expansion itemization in Diablo III, where it felt bad, but at least it did progress somewhat regularly and, more important, it got fixed with the expansion.

Anyway, I carried on, found the start of the ice caves.  There I realized how nice the open plains had been to me.

Having spec’d as a Hammerdin, as I mentioned last time, I was pretty dependent on that attack in order to kill things.  You launch the Blessed Hammer and it spins around you in an ever widening spiral, applying damage to any mob it passes through.  A pretty good attack when you’re in the thick of things, though the spiral does open up wide enough between orbits that it does miss mobs at times.  It only stops when the hammer fades after it has traveled its full distance, or it runs into something solid, like a wall.

Caves are nothing but walls, so my Blessed Hammer often faded as soon as I launched it.  So I learned to train things back to open areas to make better use of it.  Eventually I found one of the people I was looking for as a follow up quest. 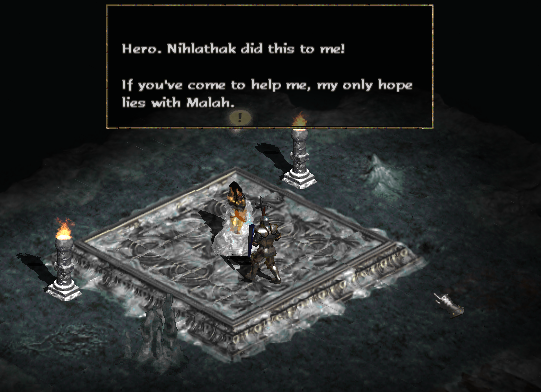 Really, I only vaguely remember why I came here…

There was a quest update, and then more caves.  I could feel myself starting to lose interest in the cave crawl, something not helped by the fact that waypoints seem poorly scattered.  There were the usual full complement of them, but I somehow managed to miss three of them along the way.

I ended up popping out of the caves into an open area again, where I faced a boss challenge blocking my progress.  Something different at least.

This was at least in a nice, open area, where my Blessed Hammer could be used to full effect.

Beyond them was the Worldstone Keep, another indoor crawl.    The mobs ramped up a bit in there and tended to come in large groups.  I hit a few points where I got overwhelmed and died and wondered if I should really bother carrying on.  The closest I came was when I died trying to get my gear back before I could toss a fresh town portal, so there was going to be a long run back to where I was.  But I persisted.  I felt I was close enough to the end that I should hang on.

And I did come to the throne of Baal.  There he throws five waves of special baddies at you, including some old favorites, as they appear to be a group from each of the previous acts, plus a special new group for Act V.  The most recognizable group was the councilors from Act III, largely because they and Mephisto were the only memorable bits of that act.

There were issues and a couple of deaths and a some regret that I didn’t thoroughly clear the whole level before I started on these event spawns, but I managed to defeat them.  Then Baal disappears through a portal and you get to follow him in for the final fight. 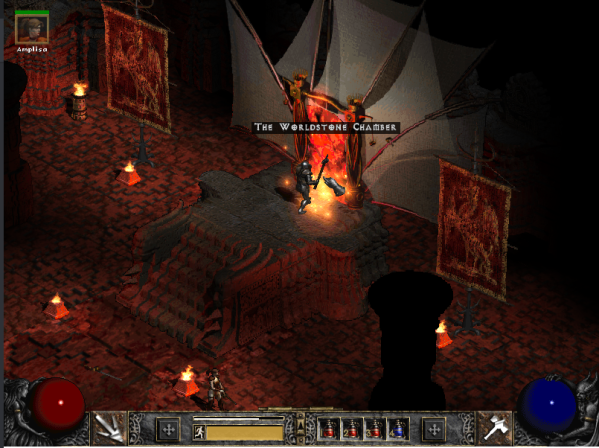 This way to Baal

When you get in, you find you are fighting two Baals.  There is no doubt an endless supply of testicle jokes in that.

In the chamber there is a real Baal and a fake Baal.  They look alike.  There is apparently a way to tell them apart by their name tab, but in the end fake Baal is less tanky so it becomes obvious which is which.

It is another fight with a lot of running away, using portals back to town to refill potions, and scrambling about to stay out of the way of Baal’s big attacks.  Keeping on your feet slows things down, but eventually I got the best of him. 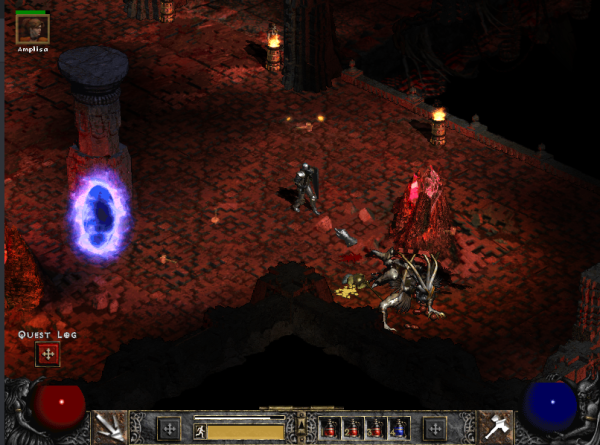 Baal down at last

That is the queue for Tyrael to show up for another one of his expositions. 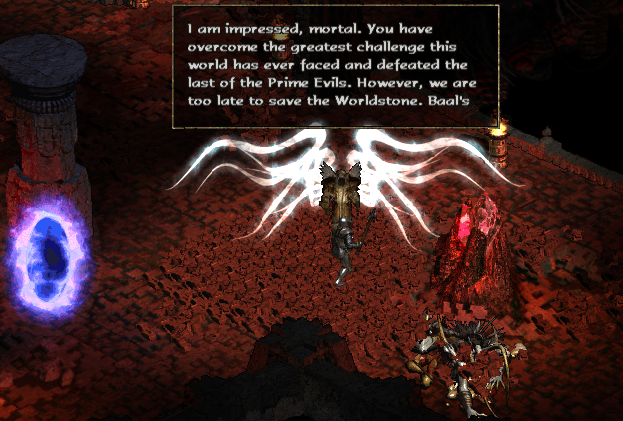 He is always impressed, isn’t he?

After that, you are about done.  You get the victory screen where it announced you have a new title. 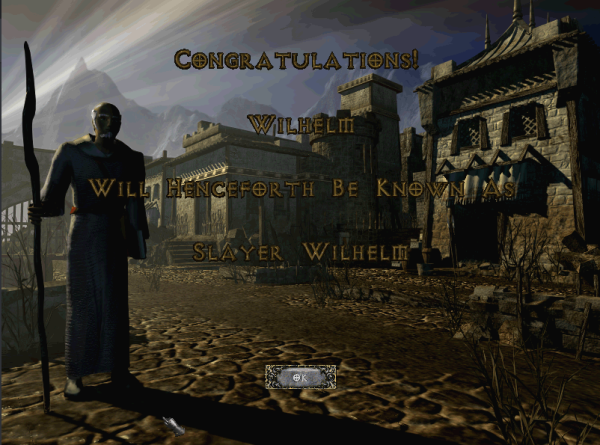 Slayer Wilhelm at your service

And then you are tossed back out to the character screen where you can choose to start over again at two of the three difficulties. 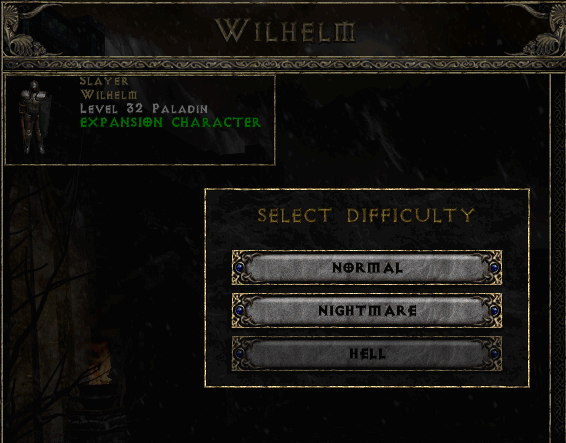 That is it, I made it through.

Despite the low resolution and the distortion caused by the game being rendered at a 4:3 screen ratio, the whole thing was very playable 20 years down the road.

In various ways the experience of playing through was both better and worse than my memories.  A lot of the game is very well tuned and timed.  The waypoints are… mostly… spread out just right to make for nice play sessions in manageable chunks.

The play though showed, once more, that Act I is good and connects you back to the original Diablo.  Act II then takes everything up a notch and gives you a brand new feel and locale.

Then comes Act III, which isn’t bad, but which doesn’t have a lot of flavor to it.  It feels like a bit of a slog just to get to the fight with the council and Mephisto.

Act IV is short, but lively.  And, of course, you face off against Diablo again here.

After which there is Act V, a level that feels like an expansion level, tacked on and perhaps unnecessary.  It wasn’t horrible.  The team clearly had some ideas they wanted to try out.  But the whole act felt like they stretched it out more just to make sure you felt like you got your money’s worth.

Having done a play through, the question becomes what to do next.  I am not particularly keen to run through the same content at Nightmare difficulty.  I am just not that engaged.

I could try another class.  The paladin has been my go-to for ages.  I might try out a druid or an assassin, the expansion classes.  I am not sure I have ever played them at all.

I should/could play each class through at least Act I… maybe Act II… to compare the classes.  We shall see what I feel up to.

But for a 20 year old game, it isn’t so out of date as you might think.  Playing through does make me wonder how a remake or remaster would play.  The temptation to update things that feel “wrong” in 2020, like the respec option, would be strong.