The war made it through its twelfth week and shows no signs of abating.

At some point during the weekend before this past one the invaders, who had been calling themselves PAPI, an acronyms whose origin I hadn’t bothered to look up, decided to change their name to the Anaconda Coalition.  The name was announced on Talking in Stations, and the public response was not wholehearted in its support.  Even members of said coalition were mocking the name on Reddit.  The universal agreed upon symbol quickly became a variation of this internet meme based on the Gadsden Flag.

The Anaconda Coalition name has since faded from use by our foes in most public forums, though the leadership still uses it in their safe space on Talking in Stations.

The action over the last week was largely concentrated in Querious, where the invaders have taken all of the ihubs in the region save for those in what is sometimes referred to a “fake Querious,” as those systems an an enclave within Delve, and that one ihub in NDII-Q, which somehow still belongs to United Earth Directorate. 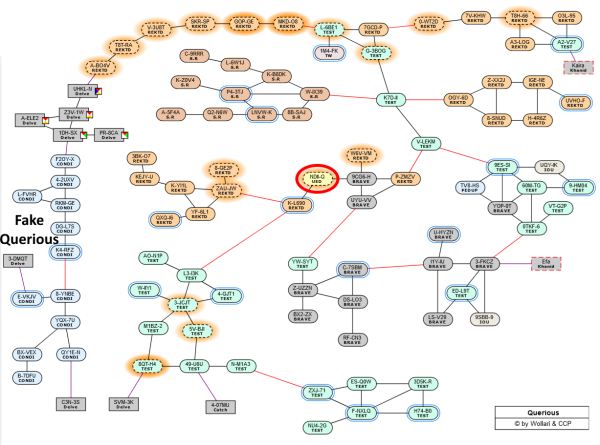 Of course, action is a relative term.  The week did not start off with much action as the invaders stood down a few times, even when they outnumbered us.  That led to a new Fountain Frank video, featuring soundtrack made up of samples from their comms.

Things livened up a bit on Tuesday night when a battle over the armor timer for a Tatara in NDII-Q escalated into a dreadnought fight that found us outnumbered 2 to 1.  The objective went to the invaders as did the ISK war according to the battle report. 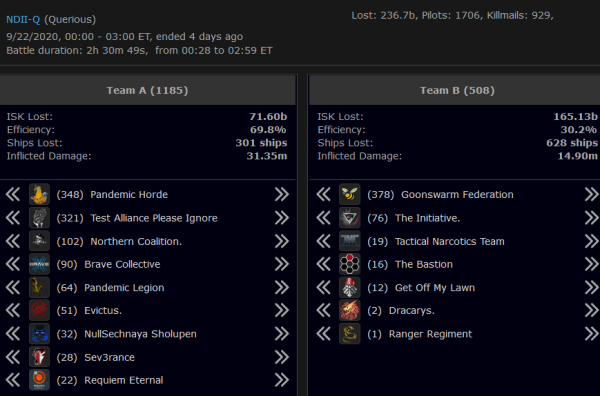 I actually missed that battle as the enemy had stood down over another objective shortly before there was a ping and a form up for the Tatara.

The next night came the battle over the armor timer of a Fortizar of ours in 49-U6U, about which I have written already.  This is where the war really began in earnest as the first big capital fight, with both sides escalating up to super carriers and over a trillion ISK destroyed.

We were, once again, out numbered by a ratio of 2 to 1 and the losses lined up to that ratio.  The enemy also won the objective.

The fight ran just four hours, which isn’t bad for a tidi slug fest where capitals are dropped, but the servers, struggling to keep up even at 10% tidi, acted up, causing more problems for us than our foes.  The server issues led both sides to decline to drop titans and even the super carriers were pulled back when it was possible.

This sort of battle is going to become more and more common as the invaders move closer to Delve and within range of our capital fleet.

After the clash at 49-U6U things settled down a bit, with no further large scale fights for the rest of the week.

When things were quiet early on in the week a group from the Imperium slipped into Detroid and reinforced then took out some TEST ihubs.

A little corner of Detroid made empty

They were replaced after not too long, but it was a nice harassment operation behind the front lines.

Later in the week the invaders managed to drop a Fortizar in SVM-3K, which is their first attempt at a big structure within the bounds of Delve, at least that I have seen.

As a potential foothold, that system would put a lot of southern Delve in capital jump range while being just beyond the single jump radius of our own capital staging.  But it is withing range of 1DQ1-A, where we keep everything else.

Being in our space, it is taking some time for the Fortizar to anchor.  It should finish its cycle tomorrow, if I counted on my fingers successfully.  I imagine we will be looking to destroy it as it anchors, which could lead to another big fight. (Addendum: A small fight, with the Fortizar killed.)

I went on a number of fleets over the course of the week, but about half of them ended up with no fight as the enemy stood down or ran off on our approach.  Of course, the 49-U6U fight made up for that.

I also did not lose any ships during the week, so my tally of losses still stands as follows:

As noted above, I expect we will come to blows over the hostile Fortizar in SVM-3K.

More interesting will be what the enemy plans to do about the Keepstar we still have in 49-U6U.  They have said they don’t want to fight on our Keepstars, but since that is where we keep most of our stuff it won’t be much of an extermination if they don’t attack them.

And, since I have been tracking this sporadically in posts, I might as well keep it up.  The weekly peak concurrent users ongoing tally:

We were up a bit for the week, though that probably has less to do with the war than with the threat to the economy from CCP’s plan to nerf mining even harder next month, but I’ll get to that in another post.

Other articles about this week in the war: