I speculated just yesterday that, with the clock running down on the WoW team, the Shadowlands expansion might end up being delayed as rather large changes were still being made late in the beta.

And today we have this from the WoW team:

To the WoW community,

I wanted to let you know that we’re delaying the release of Shadowlands to later this year—and while we’re still in the process of determining the right new date to launch, we felt it was important to let you know about this change in plans as soon as we could. This was an incredibly difficult decision for the team, as we’re as eager to get the expansion into your hands as you are to play it—but ultimately, we feel it’s the right decision for the game—and for our players.

Over the past several months of testing, we’ve made significant progress iterating on and polishing the core features and gameplay of Shadowlands. We’re at a point where the zones, the campaign, the level-up questing experience, and the story we have to tell are essentially ready to share. We’re excited by the Covenants at the heart of the expansion, and it’s been a thrill to see Torghast take shape into a fun new kind of WoW experience, thanks in no small part to your input.

However, as everything started coming together and we’ve been listening to and building upon your feedback, it’s become clear we need a little more time for additional polish, and to balance and iterate on some interlocking pieces—particularly those related to the endgame. Shadowlands is one of the most intricate expansions we’ve yet created, and while we’ve made great progress, the challenge of tuning the endgame was compounded by the team having to work from home.

Blizzard has a commitment to quality. We believe Shadowlands will be something special, and we’ve heard from many of you who feel the same. We need this extra time to ensure that Shadowlands lives up to its full potential.

In the meantime, we’re excited to announce that beginning October 13 we will be releasing the Shadowlands pre-patch, which lays a lot of the groundwork for the expansion and includes our revamped character leveling, new-player experience on Exile’s Reach, and a host of new character customization options. And once we get closer to Shadowlands’ release, you’ll be called upon to defend Azeroth against a resurgence of the Scourge during our pre-launch event.

Thanks for your support and passion, and for your continued help and feedback as we head toward the finish line.

We’ll see you in the Shadowlands soon,

The original promise from Blizzard was that we would get the expansion in the fall of this year, a season that runs until December 21st, so they still have enough runway left to make that target.

We shall see how this rolls I suppose.

In the mean time, we did get a date for the pre-patch.  We now have until October 13, 2020 to finish up what we’re doing before that hits.  Then we can start wrestling what the level squish really means.

Addendum: Word is that Blizzard sent out a note to everybody who had already purchased the Shadowlands expansion offering up a refund if they wanted it, no questions asked.  It is nice to see that Blizz has learned some lessons over the years.  Most people won’t take it, but the fact that they offered it is good PR.

I expect that this is also the reason they waited until today, the first day of Q4 2020, to make this announcement.  Q3 is locked in and if they ship before the end of Q4 they will be able to recognize revenue for all the pre-orders and new purchases, which will make the quarter for them.  But there was no point in letting even a few refunds drag down Q3 I guess.

We got the August Monthly Economic Report for EVE Online last week and I finally had some time to take a look.  I cannot even blame CCP this time for my slipping into another month.

And since there is a war on, I might as well look into destruction first.  A CCP tallied a total of 38.4 trillion ISK in destroyed ships and structures for August, up 2 trillion from July.

The top ten regions for destruction in August were:

For once The Forge region is not at the top of the chart.  Fountain, where much of the fighting was focused in August and PandaFam pushed into the region, made it to the top.  Though, to be fair, it is only there because there was almost a trillion less ISK destroyed in The Forge in August.  The July number was 3.6 trillion.

Meanwhile, the Domain region jumped considerably.  In July it was under 1 trillion, but for August it jumped past the 2 trillion ISK mark.  I have no doubt that this was due to the Triglavian take over of Niarja and the fighting that provoked.

Delve, ostensibly the target of the war, remained at a modest 1.69 trillion ISK, on par with July, while Catch, home to some of Legacy Coalition, saw destruction nearly double, hitting 1.36 trillion ISK in August, up from shy of 800 billion in July.

Then there is trade.  I was wondering if the change to Niarja would have an impact on trade in Domain and its Amarr trade hub.  It is probably too early to tell, but I can always plot the numbers and see how they change over time.

So for August these were the top ten regions for trade value:

The Forge was down a bit, though was still 10x second place.  Amarr remained in second and was up 7 trillion ISK in trade, no doubt due to its proximity to the Niarja fighting.  So maybe we’re seeing some impact already, though only time will tell.

On the money making front NPC bounties, the primary ISK faucet in New Eden, the tap was still open in several regions. 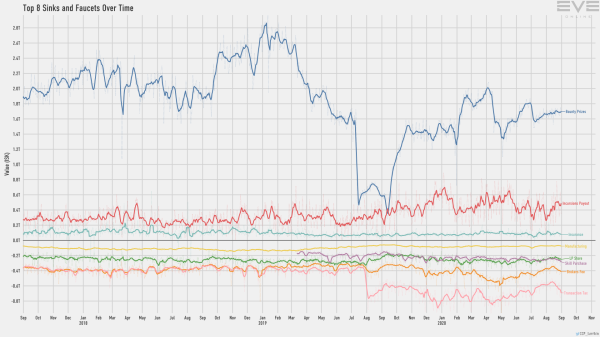 While still down from the highs of the past, and even the peaks of earlier in the year, there was still 52.6 trillion in bounties paid out, compared to 57.7 trillion ISK in July and 54.2 trillion in June.

The top regions in August were:

PandaFam may be doing the heavy lifting when it comes to the invasion, but they also appear to be benefiting from the focus on the southwest of null sec as they purge the NPC menace in their regions for fun and profit… or at least profit. 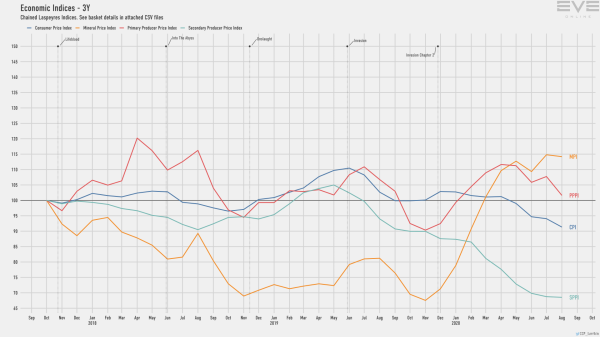 So when we tally up the mining values for August and come up with 30.6 trillion ISK in value, and then compare it to July, where the count was 29 trillion ISK, we can surmise that more ore was harvested in August.  The top regions were:

High sec remains the focus of most of the mining in New Eden, though three null sec regions are on the list.  Once again, the invaders benefit as the focus of the war is away from their regions.

I expect the mining numbers to change somewhat radically over the next few MER cycles.

CCP’s next big nerf to mining, which I mentioned on Tuesday, is set to take effect in October, but the effects were already being felt from the moment it came up.  Mineral prices jumped up significantly and a lot of people undocked their Orcas to try and scoop up as much ore as possible before the big hit, after which I expect prices will rise even further and the CCP induced shortage impacts the market. 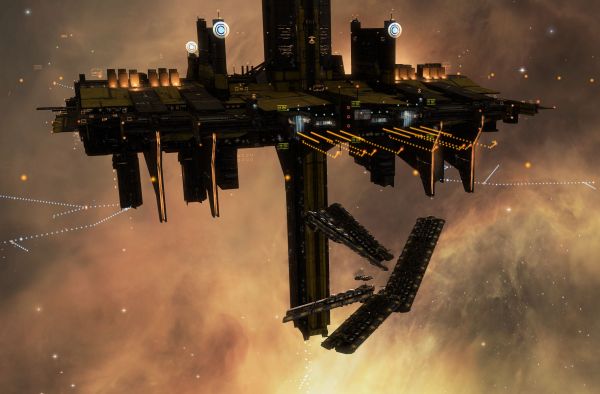 So I expect a big shakeup in the mining numbers with that.  We shall see.

As always, all the raw data for the MER is available to download as part of the dev blog post.