The running of the gnomes is back for its second appearance in WoW Classic.  It is time to get out your pink haired gnome and make the run from Gnomeregan to Booty Bay.

Some gnomes around from last year

The event will take place this coming Friday, October 16th, at 4pm Pacific time, 7 pm Eastern time, or 23:00 UTC, depending on where you sync your clock.  The official notice is here: 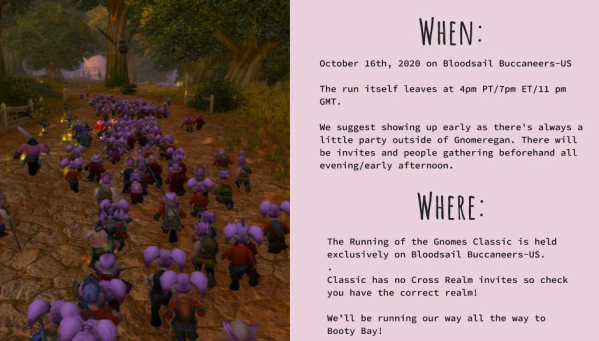 Come run with the gnomes

We did the run last year and it was pretty fun.  I have a post about it and Ula did a video to commemorate the run.  We will be back again for the run again this year.

The run on WoW Classic is in addition to the run on retail WoW. (Which was this past weekend.  I have been a bit slow in posting about this, so much other stuff has been going on.)  Information about the run can be found at the official site for the event.