In checking out the Shadowlands pre-patch, running through the new starter area is fine and dandy, but it is only a 1-10 level experience that won’t take you more than an hour unless you’re set to explore every nook and cranny of the place.  And for us… Ula, Skronk, and I… the idea was always to go check out Wrath of the Lich King in its new 10-50 incarnation.  So it was off to Northrend! 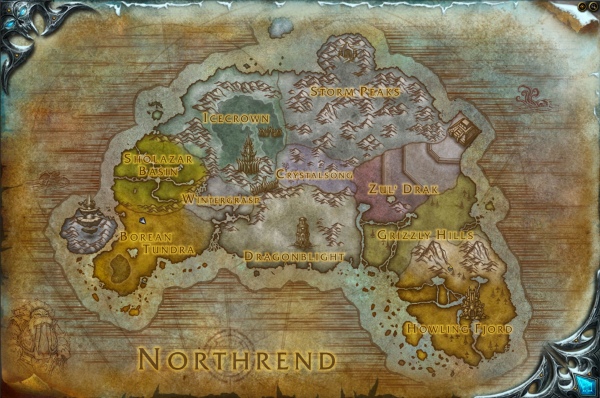 Back in the day WotLK was a level 60-70 experience.

As the level cap grew in WoW though, Blizz started experimenting with expanding the level ranges of some of the older content so that players in a game with a 100+ level cap and an xp curve adjusted to suit that wouldn’t constantly out-level zone and expansion content.

Blizz took a shot at solving this first with the Legion 7.3.5 patch, which expanded the level ranges for expansions and made everything scale to your level within those ranges.  At that point you could go to Northrend at 58 rather than 70 and could stick around until 80.

That was not enough.  Levels were still a problem.  And last week we all dropped down to a level cap of 50 with the promise of being able to choose any of the expansions as a route to that, pending the release of the Shadowlands expansion, at which point the cap would go to 60.

I made this graphic, so I am going to use it again

So off we went on the boat to Valliance Keep in Northrend.  Our little group was:

Waiting for Ula… or Mendula

Unlike the old days, one of the first quests you get sends you to Dalaran, a flight point you get by default.  You can also fly directly to Howling Fjord, as that flight point is available as well.  There would be no need to repeat our 2008 ride across the continent.

Our first ride across Northrend

One of the first things I noticed looking at the map… the real map… was that while the expansion now scales from 10 to 50, the individual zones are not all equally accessible.  There are different ranges for the zones.

So they haven’t gone full Legion/BFA “all zones are equal” with the scaling.  They do want you to go through the content in some semblance of the original order.  And that is fine.  We didn’t have any intention otherwise.

Running through the initial content was fun.  It has been nearly a dozen years since we did this, but a lot of it remains fairly fresh in my memory.  And what I had forgotten was renewed and fresh again as we moved along.

I didn’t do a lot of posts about particular zones or bits of content back then.

When we got down to the the mist shrouded beach at Riplash Strand and the haunting music I could vividly recall the first night in the expansion.  We were all out there together and I particularly recall being held up on one quest that required you to slay a named mob, Gamel the Cruel.

Gamel, Gamel, bright as a camel…

Back in the day there was no sharing a kill with people outside of your group and there was a crowd of people showing up to slay him.  This wasn’t the happy times of the launch of WoW Classic either, with everybody lining up politely and waiting their turn. (Except Poncho! Never forget Poncho the line cutter!)  I recall standing on his spawn point and casting consecrate with my pally in hopes of getting the first hit on him.  It took quite a few tries before we got him.

But it is not 2008 any more and much has changed.  You can now get a hit on a mob that somebody on your faction has started with and get credit.  And there certainly were no launch day crowds down at the beach with us, though we saw a few other players around almost everywhere we went.

And when we went to get Gamel another player ran up after we had started… a Horde player too.  But he was able to get credit, because the faction exclusion doesn’t apply to named quest mobs.  Everybody gets credit in this happy new world.

Swimming in the mists

I had the pumpkin head transmog on because I had to explain how to hide your helm, which used to be a checkbox in the settings… and still is… but which now requires you do interact with a transmog NPC.  Fortunately somebody had the Tundra Yak out in Valliance Keep, so we could use the NPC on that.

And, then when I got a new helm I had to add in that transmog isn’t applied to your character, but to the individual piece of gear, so my pumpkin head was gone.

I also had to bring up… still bitter… about how the Azure Water Strider, the most OP mount in the game and maybe the best thing to come out of Mists of Pandaria, had been nerfed so it no longer let you walk on water by default.  Our mounts had to schlep through the water like suckers.

No walking on water here

We made our way along, found ourselves out at the D.E.H.T.A. camp to run through their quests, then down to the shore and the first interaction with the Kaluak.  I spent a lot of the time with the Kaluak back in the day.  Vikund, my main, still carries the fishing pole he got from reaching exalted status with them.

We finished that up and made it to the airfield.  Along the way we all made it to level 20.

At level 20 the list of things like battle grounds that open up to you can take a while to flash by.

The leveling is probably a bit faster than the rate you might want if you didn’t want to hit level cap before you finished up the expansion, but that is okay.  I’m not sure we’re in it for the long haul, but for now it is fun and memories and an odd mesh between how the game used to be and how it plays now.

What is that diamond? Is this The Sims?

There are still some oddities.

At one point I was standing around and decided to talk to the trade skill trainers.  I trained cooking, then got the option to train Northrend cooking.

That made some sense to me because Blizz had divided up trade skills into expansion based grouping.  When I trained Northrend cooking I was then able to train up a bunch of recipes.

Then I went to the fishing trainer and that was less clear. 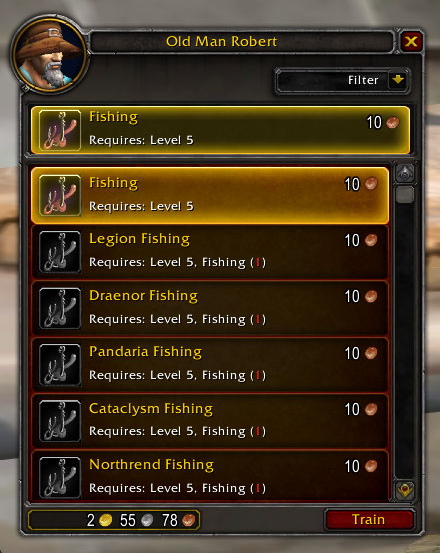 When you get fishing you get the option to train up all the expansion fishing variations.  That seemed kind of odd.  I guess it knows where you are fishing and can apply the skill up to that  area.  But I feel it might have been better to have skipped this one.

And some bugs from Exile’s Reach followed us.  In the starter area you get some skills early on, but later you choose a spec.  If your spec did not include one of the initial skill it stayed on you your hot bar and was usable… until the game tried to push a new skill onto the bar after you left the starter area.  Then the skill would just disappear, replaced on your action bar by a new one.  And it is never well received when things just disappear, so we spent some time trying to figure that one out.

But otherwise it has been a light and fun trip through some old memories.

Ula also wrote a bit about this on her blog.  Check it out.

1 thought on “Arrival in a Level Squished Northrend”