As I mentioned in the month in review post, I managed to make it to level 40 in Pokemon Go at last.  My wife got here too, though about a week behind me. 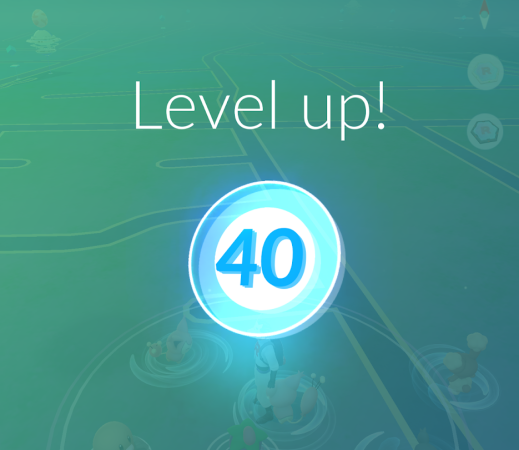 On the one hand, you’ve climbed the xp mountain.  The goal has been achieved.

And, as I mention, the way the level curve in Pokemon Go is setup, the gap between level 39 and level 40 represents 25% of the total xp needed to go from 1 to 40.  That last step is a big one, and since I hit 39 back in April I have noted not just my level in the month in review posts, but the percentage of the way I had made it towards that final goal.

There was a lot of anticipation running through me as to how long it would take to reach the summit, so when I arrived it was kind of a big deal.  I got my moment, the big 40 on my phone screen, the pile of goodies that come with the level, and all of that.

But then there is the inevitable realization that once you’re at the top of the mountain, the climb is done.  As often happens to me in MMOs, I get focused pretty hard on getting there as I get closer and closer… and then suddenly the last bit before level zips past and it happens so fast that you feel like you never had a chance to savor those last moments.

And then after all the time focused on one primary aspect of the game, you’re done with it and left feeling a bit empty as your goal is suddenly reached.

I took a screen shot of my basic stats just after I hit level 40. 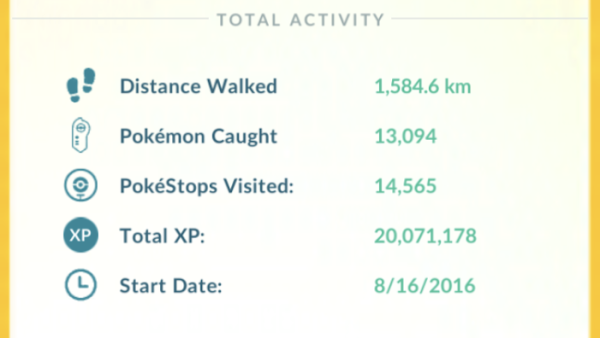 Status as of level 40

It is interesting to note that you keep accumulating xp even after you hit level 40.

My wife was a bit irked to hit level 40 after me as the account on her phone is a month older than the one on mine, so she had been ahead of me in levels for most of the chase up to level 40.  I caught up around level 36, then she passed me again, then I pulled out in front for the final stretch.

Part of the reason she is irk is that her stats on that page, for Pokemon caught and PokeStops visited, are more than 10K higher than mine on both counts.  That is few million points of xp she should have over me.

But I did better with Pokefriends.  I have 34 “best” friends in the game, and you earn xp for each of the four friend stages, the last two being worth 50K and 100K respectively.  She had about half that many when she hit 40, so that gave me a couple million extra xp on my own.  Plus, I managed to pop a lucky egg for a couple of best friend events, which doubles the xp.

Now that we’re both 40 and the xp race is done, the question is what to do now?  After all this time, it is kind of our thing, something we do together.

In the grand tradition of the mainline Pokemon RPGs, there is always the quest to catch them all.  There are still a bunch of Pokemon we’re missing.

And, more in the MMO tradition, there is raiding.  One of my wife’s friends has been including us in a group that coordinates to do gym raids, something that is also helping us fill in the missing Pokemon.

We did talk about trying one of the other Niantic games, specifically Harry Potter: Wizards Unite.  However, that didn’t seem to be taking off… or be much more than a re-skin of Pokemon Go with a Hogwarts motif… so we stuck with the our current game for now.

Pokemon Go has been upping its game this year too, with a lot of events.  And there is talk about either raising the level cap or adding another form of progression.

For now though, we’re working with the game at the level cap.  We can finally boost up our Pokemon to their max CP.