Here in the shadow of the Shadowlands launch CCP dropped an update of their own.  The Explosive Velocity update takes aim at torpedoes and a few neglected hulls. 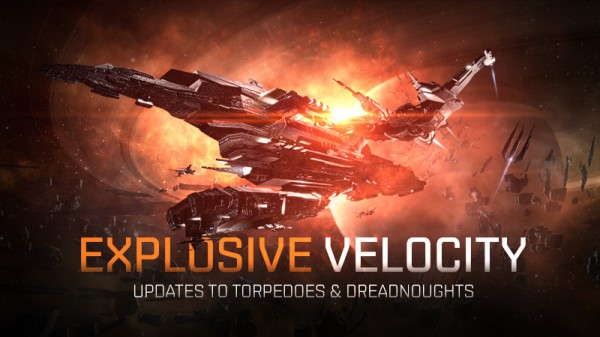 Is this the work of Team Talos?

Torpedoes will see the following changes that will make them more effective.

That will make ships that can use torpedoes a little more effective and give them a little more power grid to play with when launchers are mounted.

One set of torpedo using hulls did get a bit of a nerf.  Stealth bombers were already pretty powerful out in the wild and remain quite popular, so they took a hit to keep them from being too OP.

That offsets some of the torpedo buffs, but still leaves them better post-patch.

Two dreadnoughts also got changes today to help them be more competitive.

The Phoenix, the platform for XL torpedoes, also benefits from the above changes, which might help break it out of its very specialized applications.  We shall see if the slot changes helps the currently unloved Moros.

Then there is the Griffin Navy Issue, which is neither a dread nor a torpedo platform.  It just needed some help in its role as a short range ECM drone boat it seems, as CCP made the following changes:

It got a bigger drone bay and the ability to launch more drones, but that 85% nerf to drone damage clearly means CCP doesn’t want people running it with combat drones.  ECM only please.  We’ll see if anybody ends up using the hull now.

And, finally, today’s patch slips in what I will call the “YZ9-F6 boson fix.”  Back in October the Imperium set a trap to slaughter PAPI caps and supers, and executed it correctly… only to have CCP’s code fail to deliver the damage it should have.  CCP acknowledged the issue, though there was little they could do after the fact.  But this line in the patch notes seems to indicate they have tried to remedy the issue for future fights.

Improved the stability of damage-over-time superweapons to make them more reliable at applying their full damage under heavy server loads.

Of course, somebody will have to trust CCP enough to try it before we’ll know if the fix was effective.  Who is going to gamble some titans on that?

Anyway, the patch notes are available and the update has been deployed.

3 thoughts on “The Explosive Velocity Update Lands in EVE Online”