The making of a great compilation tape, like breaking up, is hard to do. It takes ages longer than it might seem. You gotta kick it off with a killer to grab attention. Then you gotta take it up a notch. But you don’t want to blow your wad. So then you gotta cool it off a notch. There are a lot of rules.

My first impressions of the Shadowlands expansion were colored by the contrast between the epic struggle in the Maw followed by the bland, Elysium fields of Bastion, where everybody seems to be working on their personal issues.  It felt like something of a downshift into.  I understand the Rob Gordon rules of cooling it off a notch, but Bastion felt like a few notches down.

I get that Oribos and Bastion had to shoulder the intro segment, had to get you settled and set the ground work for what was to come.  But, as I said in my previous post, one minute we’re fighting beside heroes in the Maw, the next we’re talking about our feelings and being shown where the Inn is located.

I will also grant that Bastion got better by the end, but that largely involved some invaders from another zone, Maldraxxus, which is, naturally enough, the hook to send you off to that zone.  You head back to Oribos and get sent off to Maldraxxus, flying in over a very different landscape from Bastion. 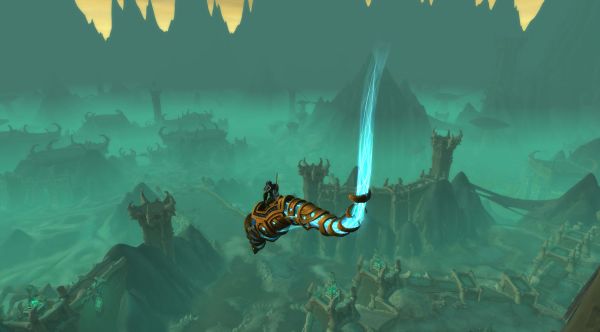 It isn’t easy being green

But the highlight of the view is flying over an arena called the Theater of Pain.

The Theater of Pain

It is huge and detailed, ringed with giant spectators, and the floor bustles with activity as you fly over it.  I immediately wondered if I would be able to go inside, and I was not disappointed.  You are pretty much flung immediately into the giant brawl that dominates the center of the arena.

If is a giant battle royale with a host of NPCs, regular and elite, with other players mixed in as well.  I have to say that I enjoyed this initial Maldraxxus  event a lot.  Part of me just likes getting in the thick of things and whacking mobs with my shovel.  It was crazy chaotic and the antidote to the tame reflection of Bastion.

As you battle your way through the event, the story of the zone comes into focus.  There is dissent between the powers of Maldraxxus, and of course, you’re there just in time, a champion who has bested the arena, to help try and set things right. 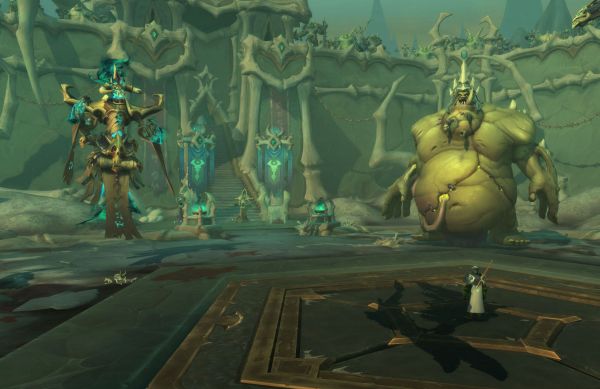 Leadership goes to the large in Maldraxxus

Maldraxxusis the land of war in the Shadowlands, but it is also a place of the crazy grotesque.  Stitches would fit right in… barely be noticed… in the landscape of Maldraxxus.  And as the land of war, there isn’t a lot of stopping to talk about one’s feelings.  Leave that to Bastion.  If you’re hear, you’re going to fight.

You are, naturally enough, the champion who can help the locals put down the rebellion and restore order by finding and activating the five runs, one for each house of Maldraxxus.

Also, the spot in the picture above is where I, and a lot of people seemed to get stalled.  You are told to activate a rune, but it isn’t really clear how you do that at first glance.  I saw people bumping all over the place.  What you do is stand in the shiny swirl on the ground, which gives you a button to activate your current rune.

So you get to ride about visiting each of the houses that make up the zone.  There are probably mounts that fit more in with the theme, but I felt being on my chopper set the right mood in the land of war. 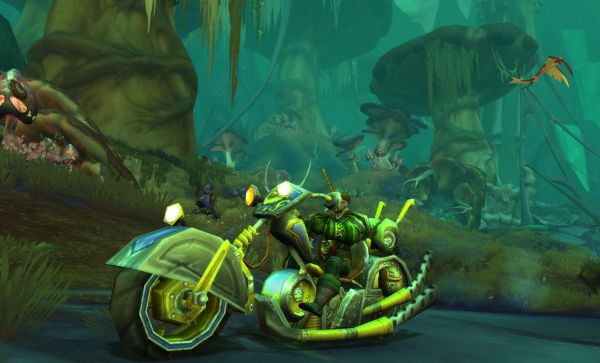 Also, I still like that mount more than a decade later.  And I actually saw a few of them out and about. 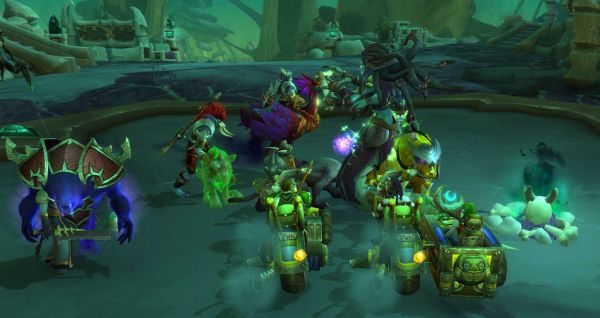 The passenger ability is fun as well

There are a lot of the standard quest tropes, though I was okay with them giving up on the “thow ingredients as the NPC calls them out” potion making mechanic that has been in the last few expansions at various points.  This time around it seemed to be “just throw the stuff in the pot already and let’s move on with things” on that front.

There were a couple of new things.  I cannot, for example, recall having had to play dead to get dragged off into an enemy camp before. 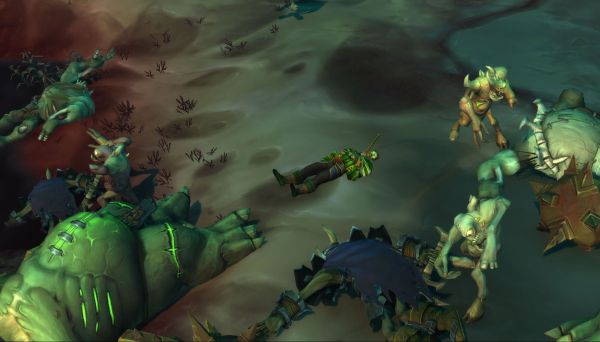 As Peter Falk said in Anzio, the living tend to lay on the stomachs in a protective fashion while the dead tend to just flop on their backs.  I don’t know if that is true, but it seems reasonable.

But there is also plenty of the same, like riding on a great big construct to slaughter the bad guys. 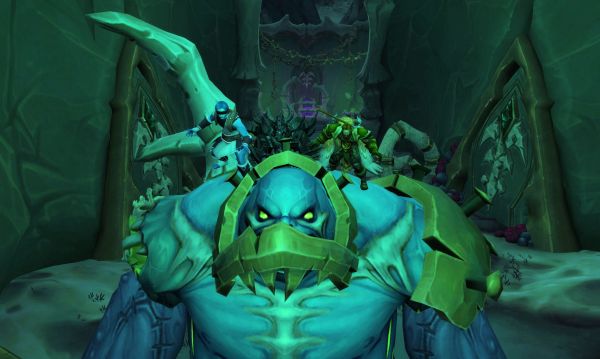 Going into battle on an abomination

As Bastion is light and airy, Maldraxxus does carry its dark and somewhat sickly green theme throughout most of the zone, trending towards orange, blue, or gray in places, but always dank in feeling.

Zangarmarsh meets Icecrown in a way… mushrooms and bone architecture

Before you’re done with the zone you do get to pop back into the Maw for a bit, but only to rescue on person.  You don’t see Jaina, Anduin, Baine, or Thrall, though you get a quick clip of them suffering in Toghast, a tower within the Maw.  But they are still holding out while you figure out what is going on elsewhere.  Then it is back to the portal and out of there. 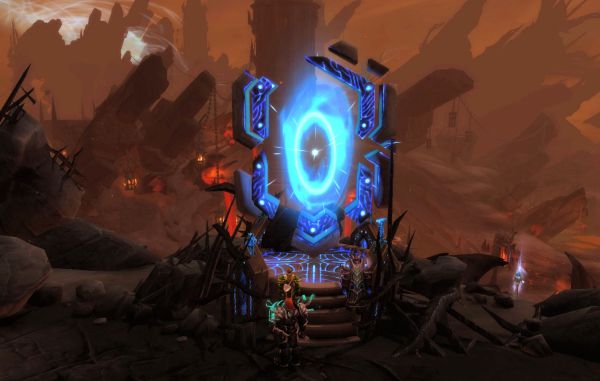 Who said leaving the Maw was hard? I do it regularly.

After obtaining the five runes, you open the door to speak with the Primus… and get your achievement for having finished up the basic story line.

I also finally received an upgrade to the sword I picked up in the pre-launch events. 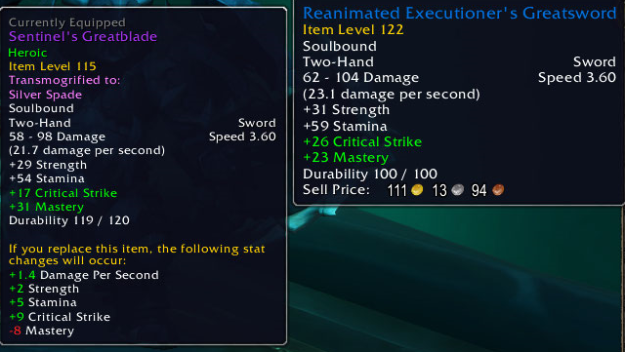 A better blade at last

Vain as I am I guess, I keep transmoging my new gear into my standard look, the green armor, Wildhammer Clan tabard, and the silver shovel as my weapon.  I just like my old look, though the transmog costs are eating into my gold.  Blizz will make you suffer, financially at least, for fashion.

All in all, great zone, 10/10, would adventure there again.  I want to get another melee class in there, maybe a Deathknight, to do the Theater of Pain intro.  That set the tone for the whole zone.  I even managed to get the exploration achievement while I was there, probably the first step towards some eventual pathfinder achievement.

Meanwhile I have probably a third of Bastion still to explore.

And now the main story line has sent me off to the next zone, Ardenweald, which is said to be all nature, forests, and elves.  We shall see if my Maldraxxus high will carry me forward.

On the general game front, I keep seeing Blizz drop patches.  They claim to have fixed some of the phasing issues, though I haven’t had a chance to try that out since that patch.  Blizz does seem to have messed up chat channels though.  I have a few tabs for specific things, like guild chat.  For the moment everything seems to get dumped into the main tab and all the others are empty.  I’m sure they’ll get to it, but still… and there have been times again when the server has been a bit laggy.

My main problem though seems to be not being able to see the quest giver question mark floating over the heads of giant mobs.  I keep turning around looking for where the quest is, only to find that I need to look up.