In the grand scheme of things in Blackrock Depths, we are nearing completion.  We have been to most of the spots on the map. 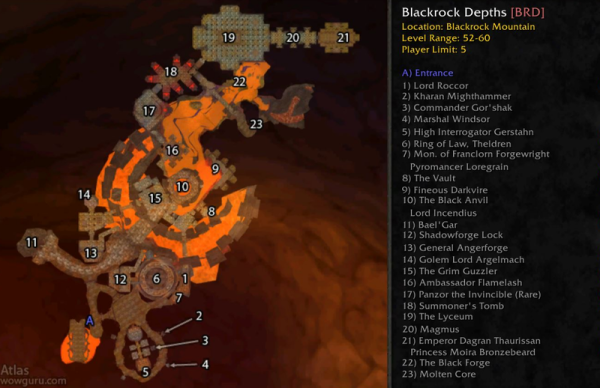 We really only have two locations to hit to be able to declare ourselves done.  We have to face Magmus (20 on the map) and then Emperor Dagran Thaurissan to rescue Moira Bronzebeard (21).

And we have been doing pretty well.  Much more so than I might have credited us as a group of four.  So when we got together last week we were set to get in there and get it done.  Our group was:

We met up at Thorium Point and ran down the chains and to the instance one more time.

From there it was off to the left and through the gate with the Shadowforged Key, slipping past the wandering fire elemental easily enough.  Then we were in through the side door to the room that controls the bridge.  We found we did not even have to clear the full room.  Skronk slipped up to the control and was still out of aggro range of the final group.

From there it was up the ramp and some clearing to get ourselves along to the manufactory and into the Grim Guzzler, the same path we took the week before.  However, we were hurrying along a bit too quickly and were, at times, a bit optimistic about aggro radius.  And accidental proximity pull of a group left Viniki down, though we won the fight.

Viniki waiting for a ress

We managed to stumble through the manufactory without losing anybody, though we managed to get ourselves a couple more surprise pulls.  Then we cleared the bridge and were into the Grim Guzzler once again.

This time we were just passing through, so I bought the beers for Private Rocknot and set him up for his event.  He got rambunctious and set of Phalanx who knocked open the back door… there must be some sort of emergency fire exit clearing routine in his programming… before we knock him down ourselves.

The back door open we headed out to keep clearing the way to our goal.  But them Skronk went down the steps and we got another proximity pull with me at the top of the steps and out of line of sight for heals.  That quickly led to our first wipe. 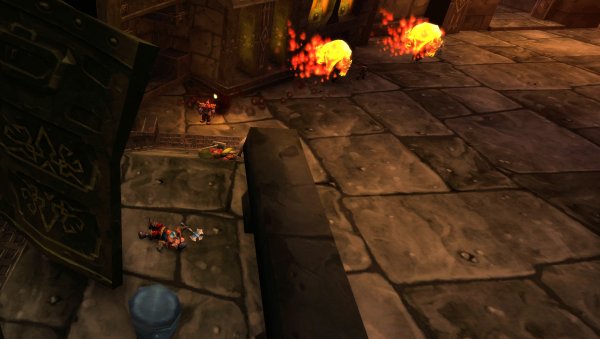 Accidents happen.  So we released, ran back to the instance, ran through the dungeon and back through the Grim Guzzler to get ourselves setup on the steps again.  This time I ran on in to start the engagement… and it turned out there were more guys than we had planned for… and, well, things went down hill from there and we managed to wipe again. 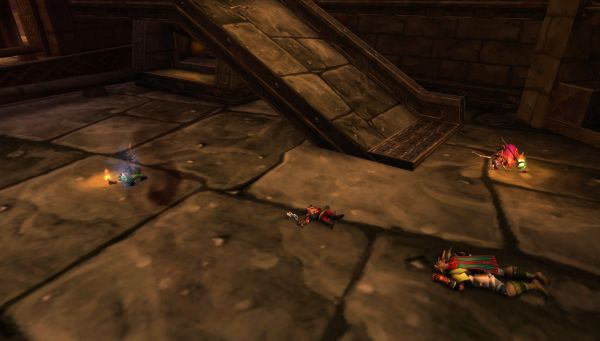 Dead together at the bottom of the ramp

We at least took one of them out before we wiped, so once we released and ran all the way back once again we were able to take them down without any further drama.

Around the corner, once it was clear, we came upon Ambassador Flamelash once again, a fight that seemed a lot tougher this time around.  Skronk died part way through the fight but Moronae was able to get a combat ress on him so we could finish things up, though it was a close run thing.  I think everybody ended up dying on their own during a fight at least once… twice for me… along with the various wipes.

We managed to wipe once more due to me running out of Skronk’s healing range as we fought the last group in that room. 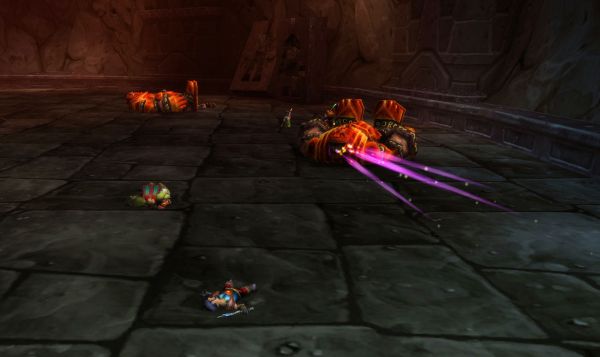 Ula was the last hold out

Another run back.  We cleared that out and then did well on the Summoner’s Tomb event, slaying the seven dwarves without too much trouble.

All of that was just precursor to our first objective, which was to get through the Lyceum.  That was where we had stopped last time, though we had done a lot before then.  This time around it was our first main goal.  There are two mobs you need to slay in order to loot torches from them so you can light the braziers which opens the way to Magmus.

The trick, as noted last week, is that the non-elite mobs in the room are on a very quick respawn timer and come in groups of six to a dozen.  Also, unlike mobs early in the instance, that are around level 50, these are level 55, so have a much larger aggro radius relative to us.

Our plan, at the end of last week, was to look up some info about the Lyceum to see if there was a strategy we could make work.  Unfortunately, the info we found tended to be along the lines of “stay tight, AOE the crap out of things, use the columns to break line of sight with ranged mobs, get the torches, there is a safe spot near each brazier.”

We decided to head towards one of the braziers, get to the safe spot there, and see if we could spot one of the mobs with a torch.

And, we actually made it to the platform with the brazier.  From there one of the torch carrying mobs, which Skronk had spent some time scouting out with mind vision and marking, was visible walking back and forth.  I tried to slip over in range of the torch mob, and managed to tag it, but I brought back a whole raft of non-elites with it.  We ended up in an epic fight on the brazier platform.

Moronae in bear form holding out at the end

However, it ended up as a wipe for us, though we did kill the torch mob.  The hope was that Moronae could stealth in and loot it when we got back.  However, by the time we ran to the instance and then took the path all the way through to the Lyceum again, the corpse had faded.

More research ensued and it came up that the torches persist and can actually be sold at the auction house.  The thought then was that we could perhaps blitz our way to a torch bearer and, even if we wiped, if we could just loot the torch we would be a step closer to getting through.  So I led a run straight for one of the torch mobs, and we got him down too.  I even clicked to loot him.

But I had turned off auto loot back when I went to grab an item from the chest you get at the end of the seven dwarves fight.  If I had had the option set we would have had a torch.  Instead, Skronk and I lay dead next to the corpse, still sparkling and ready to be looted.

Our corpses are practically on top of him

But at least we had a plan.  So we released for another run back, only to get to the room with the bridge control and find that it had respawned.  We killed a mob in our way and ran up the steps in the hope that we might beat the spawn there, but we were too late.  Groups at the top of the ramp were there and even as we watched groups down the hall began to re-appear.  We were stuck on the landing below the mobs.

As far as we could get back with many fights