SuperData Research has put out their 2020 year in review summary.  It is available for free over on their site for the moment.  [Edit: Link removed as SuperData has been shut down.] You have to fill out a form in order to get access to it… they have to have an email address and a physical address to harvest for their efforts now, this whole thing being mostly an ad for their services… but I have many addresses in my head, so I grabbed a copy of the report.

This has become an annual tradition and you can find posts here covering their report for the past three years.

SuperData only tracks the digital market, so the disruption of the old school retail channels that came with the pandemic did not cause much of a hiccup for them.  And, as they have been saying for most of the year, digital revenue was up over 2019.

You can compare that with the same data points from 2019 and see that all segments were up.

Unlike their monthly chart, SuperData once again dices up their data into different categories, save for the mobile market, so we can get a little more insight into what is booming.

While all segments were up, mobile remains the biggest market world wide.  Also, free to play dominated revenue world wide, with premium mostly being a thing in the US and EU.  Per the report:

After that we get a little red meat, some actual revenue numbers for some titles, though they are broken out by free to play and premium and all platforms are lumped together, which has the effect of emphasizing some titles over others. 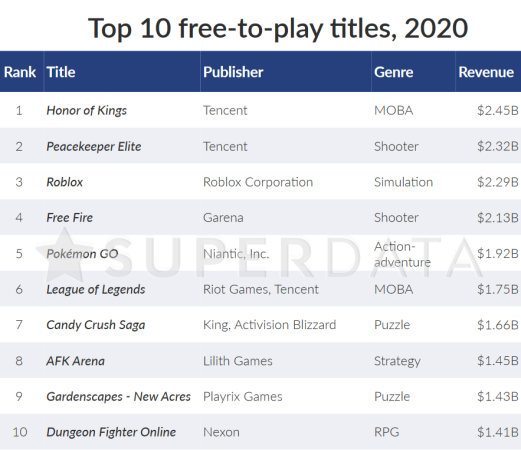 There are a lot of the same titles on that list as there were in 2019, which ought to be expected.  One conspicuous absence is Fortnite, which was in the top slot last year.  I wonder if the petulant Tim Sweeney, who was angry about SuperData’s reporting last year, has been declining to share sales data since the Epic Store is the main source for the game now, it having been locked out of the Apple and Google ecosystems.

Familiar titles from the monthly mobile chart make up a good chunk of the list.  Honour of Kings, Peacekeeper Elite, Free Fire, Pokemon Go, AFK Arena, and Gardenscapes are all big mobile titles, with the top three being primarily in China.

League of Legends and Dungeon Fighter Online represent the PC exclusive side of the house.  LoL was up over last year, but DFO was down.

And then there is Roblox, which popped up in different charts during 2020 and which happens to be available on PC, mobile, and console.  That is pretty much all the representation the console market is going to get here.

Then there is premium. 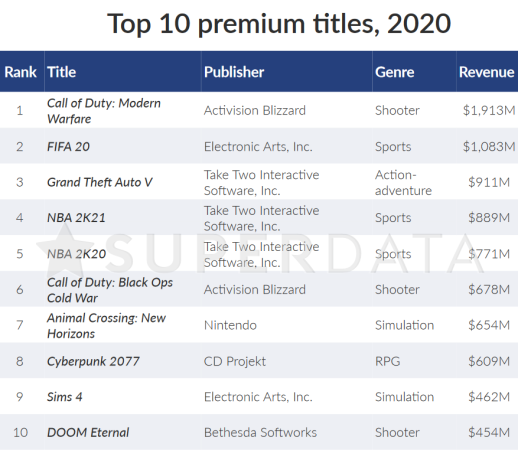 As I noted last year, this list is dominated by titles that are on both PC and console.  And according to the notes for the chart, Call or Duty: Modern Warfare gets to claim the Call of Duty: Warzone revenue due to it being part of the same install client.

In fact, glancing down that chart, the only title that is NOT on both PC and console is Animal Crossing: New Horizons, which is exclusive to the Nintendo Switch.  That is a testament to how popular the game was during the pandemic I suppose.

But even the top premium title would only land in sixth place on the free to play chart, and second place wouldn’t even make the cut.  And this divide leaves me wondering, once again, where World of Warcraft would land.  It straddles premium and pay-to-play PC and had a very good year according to SuperData.  They quoted Bobby Kotick as saying it was a billion dollar annual franchise.  I guess you have to pay SuperData for that sort of information.

And, of course, the titles that make this list are the crazy rich outliers in the industry.  As we see from things like Steam’s annual stats and data from companies like Pearl Abyss and Enad Global 7, there are a lot of games out there chugging along and making decent money.

On other topics, SuperData is following the industry trend and talking about XR now rather than VR, as that lets them include AR titles in the mix.  They did say that sales of VR headsets were down in 2020, though revenue was up, which SuperData attributes largely to Half-Life: Alyx and the hunger for people to have something new to play with their expensive peripheral.

There is more to the report, including looks deeper into certain segments, but those are the high level bits that track from year to year.  They sum up with the expectation that revenues will continue to rise, but more slowly in 2021.  No doubt if the vaccines are successful people will be keen to go outside and do something.