We are not too far away from WoW Classic having been up and running for a year and a half and I have yet to get a character to level 60.  I have the usual excuses.  I’ve been distracted by other games, not the least of which was a stretch in WoW Shadowlands.  And, naturally, my efforts in the game have been diffused by too many alts.

But I am sure I will have some level 60s by the time we get around to The Burning Crusade Classic.  While doubtful of the alleged May launch date, I am sure we will hear about it in full at BlizzConline, which is just a month away.

As for my having level 60s, I feel confident on that front because I now have three characters on the far side of the level 40 doldrums.

Well Viniki, my gnome warrior and tank for our group, faced no such doldrums.  If you’re doing dungeons there is plenty of content to keep you going.  He will likely be the first to 60, being close to 59 already and with the group still facing a series of dungeons before we’re done.

Over in Dire Maul East

Then there is Tistann, my hunter, who was level 54 already when I last checked in on my alts in WoW Classic.  But a hunter might be the most relaxed way to level up in WoW Classic.  My hunter is level 57 now, though probably would have been level 60 had I not been diverted into retail WoW for a stretch.  Between him and level 60 there are a few zones as yet untouched, so he will get there.

And, finally, my paladin Wilhelm managed to get up to level 50 this past week.  He actually rolled on to level 51 before I even got a chance to start writing this.  With that last check in he was up to 45, but the climb from there to 50 was a bit of a chore.

There are quests to be done, though a few of them take some finding.  I wanted to try and lean on quests as much as I could because grinding mobs with him felt like a chore.  So there was a lot of traveling about to pick up a quest here that was finally viable, then a quest in another zone that I could manage.

One of the realities of the 40-50 climb is that at some points you just have to stop and grind out mobs for a bit to get that next level to make the next quest or two viable, and that was pushing me away from the pally because grinding mobs with him felt like a lot of work with too much downtime.

Of course, part of that was my fault.  Early on I had picked up a build from a guide over at Icy Veins and had been sticking to that.  However, on reflection, I am going to guess that it was more oriented towards being a retribution pally in a dungeon group.  Thinking there had to be a better way I decided to try the WoW Head pally guide and its build, and ended up with something a lot more manageable when it came to mana and health.  It still takes a while sometimes to beat down a mob, but you’re able to move on to the next one more quickly.

And then I got lucky.  A ret pally is only as handy as his weapon and I managed to luck out on a bargain priced 2H hammer late on a Sunday night.  The buyout price was more than I had, but the bid price was relatively low… Auctioneer does that as part of its algorithm I have noticed… so I bid on it and went to bed.  The next day when I logged in I had a new hammer waiting for me in the mail, the Taran Icebreaker.

Not only was it an upgrade on damage alone, but it also has a nice proc as well.  My 2H hammer skills were pretty low, but that just takes a bit of time and soon I was hitting on level mobs with it for full effect, which helped me move along. 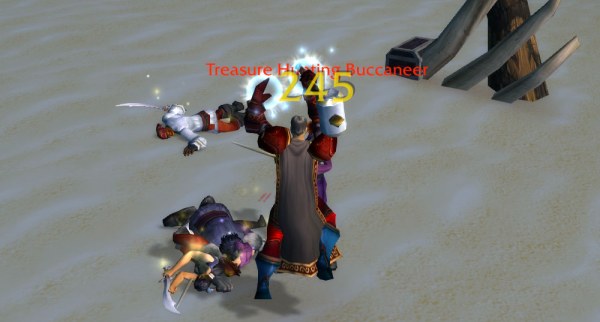 The quests were still what they were, but grinding some mobs to round out a level now and then became less of a chore.  And then, once I hit 50, some quests opened up in the Western Plaguelands, which is a paladin fun zone.  I actually rode up and got the flight point early and ground out some mobs just to get to level.  Then it was on.

So now he is on his way.  I still have to keep an eye on quests and levels and roam around between zones… after a start in WPL I went over to Felwood for the opening quests there.    If I can keep focus I might have three level 60s soon enough.  Of course, focus is a challenge.  I mentioned my sudden blacksmithing obsession, and that led to a burst of engineering work on Wilhelm, who now has the Gnomish Death Ray trinket… which is good, because he is otherwise lacking in trinkets, not counting the Argent Dawn commission.

Do not use when at low health

But once I get back on track, I could get there.

That will probably be it though.  My next highest level character is my druid, who is still level 36.  I was holding him back in case Earl made it back to the group and we needed to re-assign roles or some such.  Best not to think of him, because while hope for Earl’s return has faded, I could get tied up in another run through the 40s with a restoration druid.

6 thoughts on “Another Level 50 in WoW Classic”