I have done the gamer motivation profile thing over at Quantic Foundry a few times at this point.  It is one of those things that comes up every now and then, often part of something like Blaugust.  So you can read about my past runs… and how they differ every time… if you so desire.

However, I received an email from them last week that said they had something new for their profiles now.  They now have an array of nine gamer types to go up against Bartle’s now ancient array of Explorer, Socializer, Achiever, and Killer quadrants.  They are: 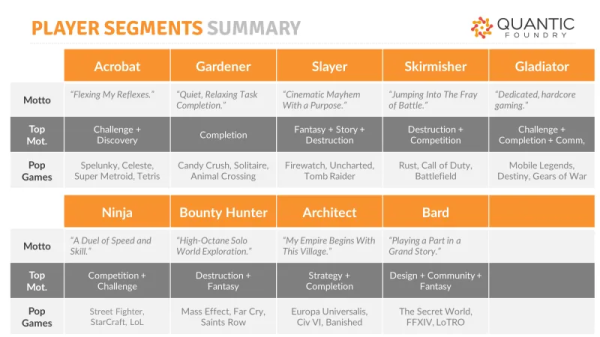 The Nine Gamers to oppose the Nine Riders

They are, if you cannot read the chart:

You can read about them in detail over on the page that describes them.

So naturally I wanted to see which type I was.  That meant going back and running through the quiz again, which is always the largest flaw in such and enterprise.  As I have said numerous times, the questions are a bit… squishy.  What I deem important can change depending upon the game or situation.  And, as such, my profile changes every time I re-do the quiz, as it did this time.

If you have an account, as I do, when you re-take the quiz you get to see your previous answers and the fact that I end up changing at least half of them every time is a pretty good indication that the question don’t have hard and fast answers.  At least not for me.

So I am apparently and Architect/Skirmisher this time around. 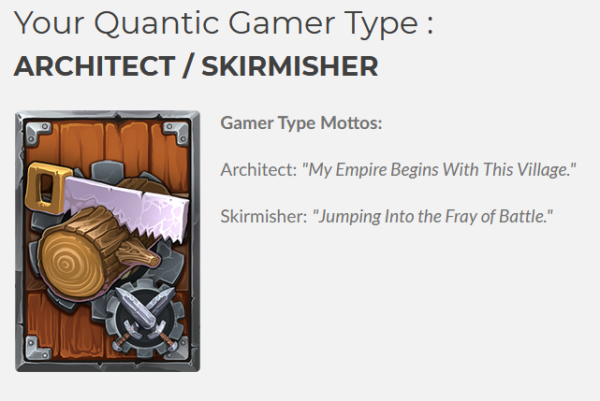 I am at war with myself

I guess.  Certainly that describes my Minecraft style.

And that sounds like the polar opposite of architect.  So I like relaxed solo, fast paced team games, and I enjoy planning but dislike thinking and planning.  I am also a by the book cop who is a loose cannon who breaks all the rules or something.

My adjectives this time around were: Aggressive, Spontaneous, Driven, Gregarious, and Immersed.

That is kind of a lot, while my graph, which I have posted with each of these was: 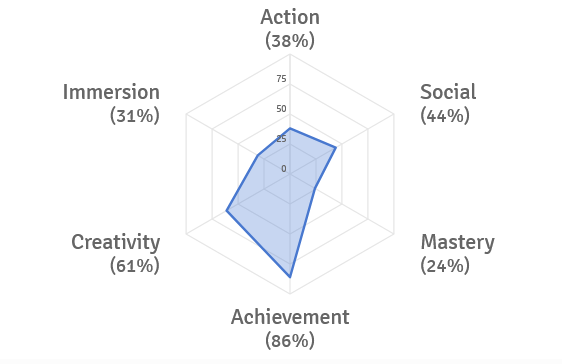 Where my motivations lay

And, as usual, once you have the profile the site tries to recommend games.  My top ten matches (for PC and Nintendo Switch) were:

I own games from half that list, but never really got into them save for Diablo.  The first game I have really invested time in on the list is Minecraft, which made it on page three of the recommendations.

Of course, judging from the Massively OP post where they did their surveys, an MMO player needs to be a Bard.  If I read the description for Bard, that sounds a bit like me too.  Maybe less on the social interaction, but certainly the bit about being a part of a grand story.  So I probably answered the questions badly yet again.  But if you go back and take the quiz knowing what you want the result to be, is it any more or less valid?

I went back and changed very little… slightly more emphasis on one thing, a little less on others, but no answer moved by more than one position… and ended up with Bard/Bounty Hunter. 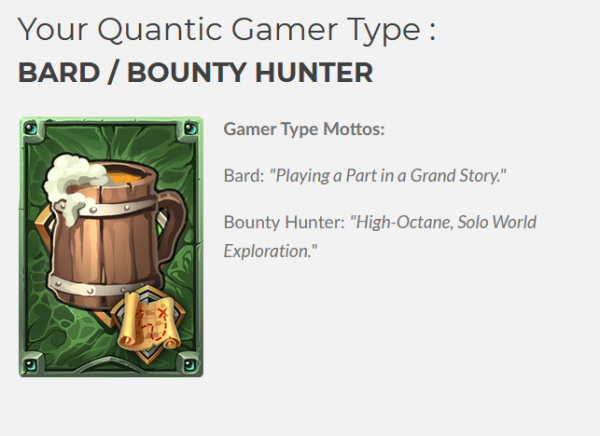 Bard yes, but a Bounty Hunter?

That is sort of me.  I am less of a chatter and more interested in interacting with the world.  Being part of a grand story that emerges from a community of players pretty much pegs why I play EVE Online the way I do, but not WoW or many other MMORPGs… largely because the grand story is scripted and has little or nothing to do with the community of players in those games.

I think the questions about explosives and being an agent of chaos are more influential than one might suspect.  That is the only thing I can imagine would get me on the Bounty Hunter type.  I am not really at “action oriented” explorer by my own measure.  Look how low my action score is both times.

At the root those small changes altered my motivations a lot more significantly than I would have guessed. 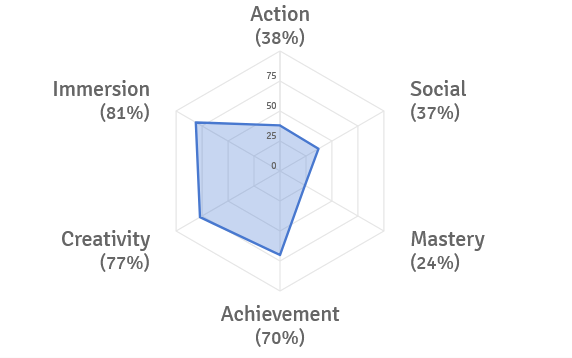 Are my motivations a lie?

You can see my current profile in detail here.

With the change of profile, my game recommendations changed… a bit.

I guess I should be happy some MMORPGs made the first page this time, though I have to question City of Heroes being a recommendation.  You cannot legally play it currently, as it is only available via private/pirate servers.  Also, like the other MMORPGs that made the top ten, it was never a game I could get into really.  Not my thing.  And, of course, WoW and EVE Online appear nowhere on either recommendation list.

So there we go.  Am I what the first pass through the quiz said I was or the second?  Should I go take it again until it gets me right?