In the previous Valheim post I mentioned that, on slaying Eikthyr and crafting the hardened horn pick axe, Hugin had swooped in to tell us about the mineral riches of the Black Forest.  Since we were keen to make metal tools that seemed like our next destination.

But I had already found the place.  Before we got to Eikthyr I had been out exploring on the raft and had sailed to an island across the water from our camp.  There, on landing, it announced that I had arrived in the Black Forest. 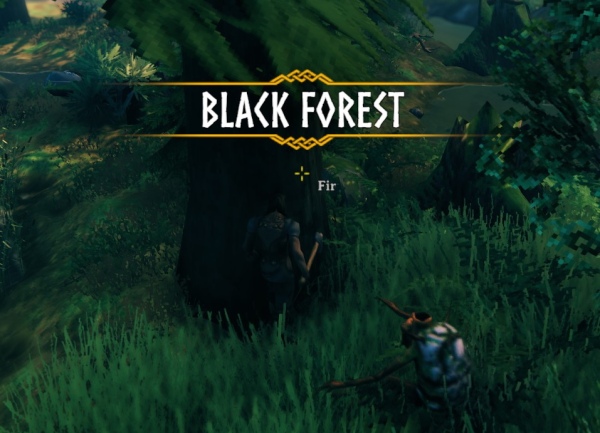 Welcome to the Black Forest!

Hugin showed up as soon as I got that message and told me I had things to take care of first. 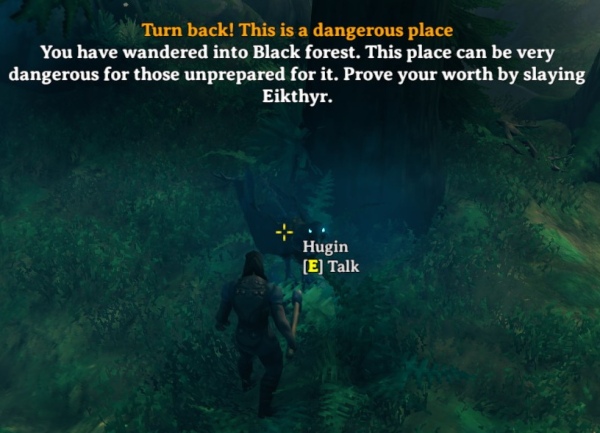 Hugin speaks of other things

If I was not convinced by his statement about danger, the locals showed up… greylings and others of their family, whom I will refer to collectively as “the greys” going forward… and set upon me quite viciously.

It was very much a “Jock, start the plane!” event as I ran for the boat, jumped aboard, and started backing away from shore, a number of the greys still in pursuit, swimming after me. 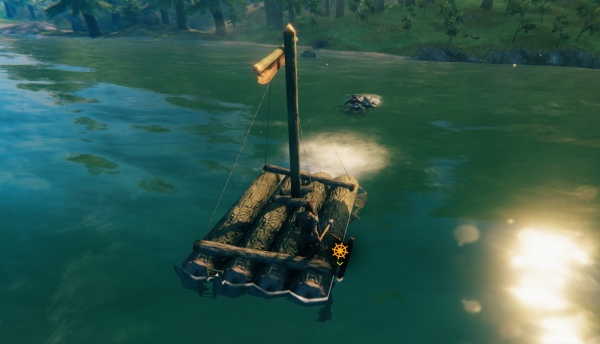 Paddling backwards as fast as I can

So it was that later, after we had defeated Eikthyr, I knew where to set sail.  I thought I might be able to slip in a ways up the coast from where I first landed and build a little base that we could use as a foothold from which to operate in the Black Forest.

I loaded up some supplies and set sail once more.  It takes about half a game day minimum to sail across the water from our base to the land where the Black Forest lies.  Of course, that is when the wind cooperates and the seas are calm.  Sometimes the seas are pretty rough… rough enough to damage to raft as you ride up and crash down on the rolling swells.

Riding up a swell

Unfortunately for me, both the sea and the wind were working against me, and by the time I arrived at the far end of my journey, it was night time… but still stormy and raining and otherwise inhospitable. 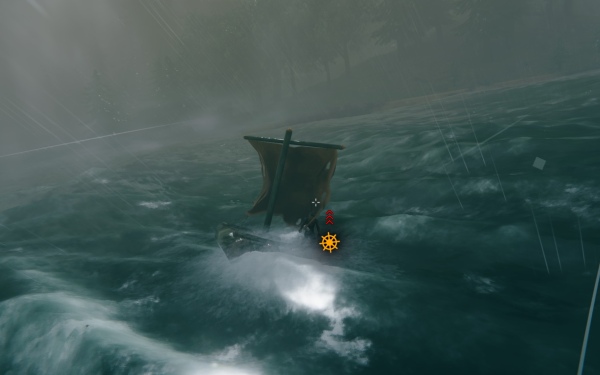 Land ho in the dark and stormy night

Things went poorly from there.  I started trying to build a palisade wall perimeter as soon as I landed, but in the dark and rain it was difficult to adapt to the terrain.  If I had waited for light I might have noticed some spots that ended up thwarting my original plan.  And then the greys started showing up.  There was off and on fighting as they dribbled in.  I was also trying to harvest more wood and my axe was wearing out.

At one point I needed some more stone so retreated back to a rock outcropping on the water to use my pick axe to dig up some.  However a network glitch got me, the pick didn’t swing for a bit, buffered my clicks, then suddenly I found myself in a hole that I couldn’t jump out of… probably because I was over weight due to having just picked up a bunch of stone.

There is a weight limit of 300 pounds, after which your character struggles to move.

I started trying to dig forward to create a slope which would let me out of the hole when six greys showed up above me and started beating on me.  I died.

That was a very inconvenient place to die, as you respawn back at your bed, which for me was back across the water at our base.  I had actually built a bed, but never got walls and a roof over it, so could never use it.  Now I had to collect some supplies and put on my backup gear… my tattered rags and stone axe… build another boat, and sail back to see if I could collect some of my stuff.  That hardened horn pick axe was a difficult item to replace to start with.

Fortunately, the weather was a bit more cooperative on my return voyage, and I arrived in daylight and was able to spot the camp and my first raft. 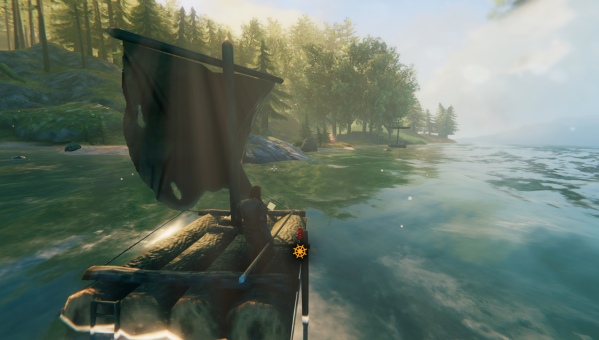 The scene of the crime

The stone outcropping is dead ahead in the screen shot.  I pulled up, jumped off the raft, and jumped back in the hole to get my stuff.  I equipped the pick axe and dug the sloped ramp to get myself out and looted some more items off my corpse, but it wasn’t too long before that group of greys showed up again.  I had to fight my way out of the hole, leaving behind quite a bit of stuff, but nothing critical, and run for the raft.  Once again I sailed away with greys swimming in pursuit.

I made the trip back as the sun set, sailing in the dark and cold.  The good news is that being wet and cold and tired won’t kill you.

But it was clear that I wasn’t going to be able to just half ass myself into a foothold in the Black Forest.  I spoke with Skronk and he started working on a resource plan to allow us to make the voyage and setup a defensible perimeter.  This first attempt was my Dieppe, a raid gone bad.  Next time we would shoot for something more akin to Normandy.

5 thoughts on “Traveling to the Black Forest in Valheim”