We had the first day of BlizzConline yesterday.  There were some interesting announcements.  But what I was really there for was WoW Classic and The Burning Crusade expansion.  Holly Longdale got up there on the main stage… alone, no audience in the pandemic… during the opening ceremony and told us a bit about the coming of The Burning Crusade.  It wasn’t much more than a confirmation that it was coming, but it was at least that.  (Though, we knew it was coming due to that leak, but it is always good to hear somebody say it officially.)

Then, the first panel up was about that very topic. 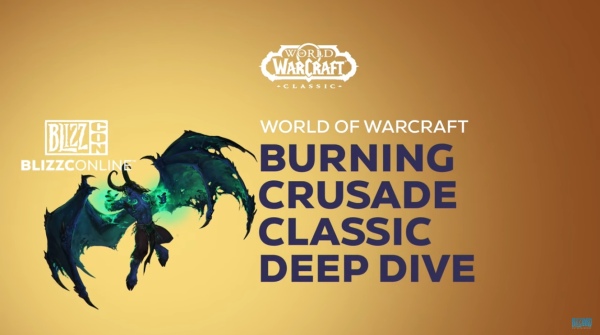 How deep will they dive?

This was not what would have passed for a “deep dive” at past BlizzCon events.

The panel consisted of:

The panel started with the three of them talking about their impressions of TBC back in the day for a bit, then moved on to some tales of getting the old code working within the current WoW framework, all of which was fine and interesting, but wasn’t delivering a lot of details that many fans… myself especially… were looking for.  There were no slides with bullet points or diagrams or any of the items one might have come to expect from such a presentation.

Towards the back half of the talk… it was only a 30 minute panel, so it wasn’t a long wait.. they finally started spilling out some details.

The first solid nugget in my notes was about Blood Elves and the Draenei.  They will be released into the game with the TBC pre-patch to allow players to have a chance to get leveled up some before everybody jumps through the dark portal.

Then details for characters and servers came up.

The current servers will become progression servers, a term many of us from EverQuest will remember, as SOE started doing that back in 2006 with The Sleeper and The Combine servers.  (see timeline) All of the current WoW Classic servers will move forward to TBC.

If you don’t want to go there, you will have an option.  On launch day you will make the choice for all of your characters, to stay and progress forward into TBC or to move to one of the new WoW Classic servers that will launch the same day that will remain forever vanilla.

If, at a later date, you regret your choice of committing to forever vanilla, there will be a paid service option that will let you copy a character from one of those servers to a TBC server.  You will then, at that moment, have two identical characters in each realm.  They will diverge as soon as you go through the portal and get your first gear drop, but you can be in both worlds.

Meanwhile, if you don’t want to play through all of that WoW Classic crap because TBC was your favorite part of WoW, Blizzard will have an option for you as well.  They will be offering a level 58 character boost… no Blood Elves or Draenei, sorry… so that you can jump straight to the dark portal and get going.  Oh, and you can only have one character boost per account.  If you want to raise an army of level 58s, you’ll have to do it the old fashioned way.

No pricing was announced for either the copy or the level 58 character boost.

In fact, few hard details were shared.  There were certainly no dates.  Beta will start “soon,” for whatever value you care to assign to that variable.  The rumor about a May launch seems even more laughably wrong than it did when I first heard it give how little concrete we got from this.  The tone of the discussion indicated to me that they have more work to do and want to allow time to find and fix issues before it goes live.

If you are keen to see the panel, Blizzard posted it to their YouTube channel almost immediately after it was done, so here it is.

I do want to say how weird/wonderful it was to see Holly Longdale, so long the voice of EverQuest and something of a champion for the “classic” retro experience being not just a valid desire for fans, but a lucrative direction for companies to pursue.  There is clearly a synergy… and I use that word here unironically, which is so very rare for me… between her experience and where Blizzard now wants to go with their retro WoW experience.

Anyway, that was the WoW Classic part of BlizzConline.  Tomorrow, the rest of it.