After the first two bosses ended up being more difficult than anticipated/advertised, Eikthyr’s surprise lightning and all the extras that showed up for The Elder, I was determined to approach the third boss in Valheim, Bonemass, with much more care.  Especially since every time I see that boss mentioned, it is explained that he represents a much more difficult fight than the first two.

Of course, the first thing we had to do was find him.

As with past bosses, his location was revealed once we found the right runed tablet to click on, this time in one of the swamp crypts we had been pillaging for iron scraps.  The location was way up north from our main base, well beyond where I had explored previously.  Bosses have multiple locations in the game, and later on in a crypt to the south I clicked on another tablet that showed a location for Bonemass to the south of our main base… that was even further away.  I would have put a screen shot of the map showing the spot relative to our main base, but I have to zoom out so far that all my notations blur together and cover everything up.  So it was a ways up north.

Fergorin had already been up that way exploring coastlines, so I had a bit of an idea where to sail.  I got in one of our trusty Karves and set out for the north to find the altar where we could summon Bonemass for the fight.

He appears in a swamp and my hope was to find a swamp with a nice little meadows area adjacent where would could set up a forward base from which to stage out attack.

As you move further away from the spawn point and henge at the center of the map, the more the mix of biomes favors higher level content.  Specifically, you end up with a lot of plains biome areas, an location we were not ready for.

So, as I approached the Bonemass marker on the map, I ended up encountering a lot of areas of plains, with the Bonemass swamp not only be adjacent to a large plains biome, but also sprinkled with little biomelets of plains around its coast.  It was just such a little patch of plains that introduced me to the deathsquito previously.

If I have a complaint about the procedural world generator, it would involve its habit of putting tiny biome strips in rather odd places.

And, as if to stoke my paranoia, a deathsquito appeared and came after me as I passed close to one of the small bits of plains.  I managed to kill it with a bow shot from the boat, but I quickly put some more distance between me and the coast.  I could see one of the giant bison wandering a little strip of plains, stomping random wandering Dragur and skeletons unfortunate to wander too close to it.  The biomes at war.

With visions of the plains, I went searching for a safer place to set up camp.  I found a nice sized meadows biome a short sail away.  It was also hemmed in by plains, but there was enough buffer that I felt confident in setting up a base in the middle of the meadows shoreline. 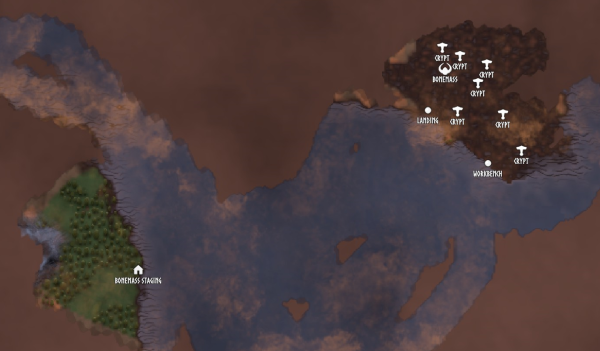 My camp across the straights from Bonemass

I had brought with me materials to make a portal to connect to our utility “explore” tagged portal back in out main base.  That set up, I built a perimeter fence and stocked up on supplies with an eye to making another amphibious assault to build a final outpost walking distance from the fight so we could respawn close by should the fight turn into a wipe.

The staging base in the meadows

I also read that one of the best weapons against Bonemass was frost arrows.  That required drops from drakes, which live up in the mountain biomes.  I had only seen a single drake up to that point, but I made some frost resist potions, which you need for your initial forays into the mountains lest you freeze, and found some drakes.  They turned out to be a bit of a push over with my bow, even with only flint arrows.  I was able to collect what I needed for the frost arrows, and even spotted an expose silver vein, a rare thing indeed, which allowed me to make the first piece of wolf armor, the cloak, which gives you the frost resist buff without the need for the potion.

The stagbreaker two handed hammer was also mentioned by some for dealing with adds in the fight, as it has an AOE affect that will pop the blobs that Bonemass summons.  Crowbar had made one, but didn’t like it that much, so left it in a chest.  I upgraded it to tier 4 and gave it a try in a swamp crypt, where its AOE can bring down mobs on the other side to muddy scrap piles without the need to get in close or use up your arrows.  It worked well for that.

With supplies laid in, including stacks of poison resist meads, I sailed again across the water to the swamp where Bonemass’ altar lay, looking for a safe spot to land in between the plains biomes, and found a likely cove a short distance away.  I was able to scout out the vicinity.  People talking about Bonemass mentioned a need to prepare the area before the fight, to get obstacles clear and minimize the amount of deep water close by.

On Saturday Crowbar and I were on and we decided to go to that prep.  We went through, to the staging camp, loaded up the boat with some materials, then sailed to the landing zone I had scouted.  A little ways away from the altar we cleared a bit of land and built a palisade perimeter and I put up another portal.  I had setup a connecting portal before we left, so once that was up we had direct access to our main base. 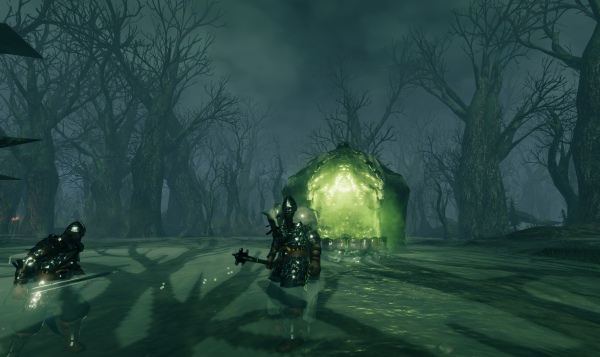 Out at the altar in some knee deep mist

Then we set about clearing the land around the skull altar for the fight.  As we were working, Crowbar asked if we should maybe build a tree house or something in order to position ourselves for archery.  I had seen that mentioned as well, and figured it would be good, so he set out to work on that.

I left for a while as Crowbar worked on a Swiss Family Robinson like set of platforms up in the trees.

Up on one of the platforms in the trees

Later in the evening, Crowbar, Fergorin, and I were all on and we were talking about the coming fight and decided that, since we had everything set up, we ought to give it a try.  I had been planning on having 4 or 5 of us for the fight, but what the hell.  It would be a good recon if nothing else, and we could escape through our portal if it was required.

We all got our best food… I had a few serpent stews left, which I handed out… and took our poison resist meads.  We had out bows ready and a stack of frost arrows each.  Crowbar and Fergorin got up on platforms ready to go, while I stood down at the altar, ready to summon Bonemass with 10 withered bones.

When everybody was ready, I used the bones and the message of the summoning appeared.  I scampered up the platforms of one of the trees, getting up before Bonemass noticed me.  He was there, a huge green blob.

We let loose with our arrows, and found that we were all high enough that none of his attacks could reach us.

We sat up there, took aim, and shot, letting stamina build up as needed.  The serpent stew, in addition to a good hit point boost, adds a lot of stamina as well, which was probably more important to this fight.

Bonemass summoned a bunch of blobs, but they were stuck down on the ground with him.  At one point some skeletons showed up and attacked the blobs, but Bonemass knocked them out, which was probably the only thing he was able to hit.

The fight took a while and we went through a bunch of arrows, but we were never in danger while we stayed up on the platforms.  Eventually he was destroyed.

The mass is no longer moving

At that point Fergorin stepped to far and fell off of his platform into the mass of blobs, and I ran down with the stagbreaker and popped a bunch of them.  So at least I got to use it.

We collect the trophy and the three wishbones he dropped.  Hugin eventually showed up to tell me about the wishbone, which is really a magic metal detector. 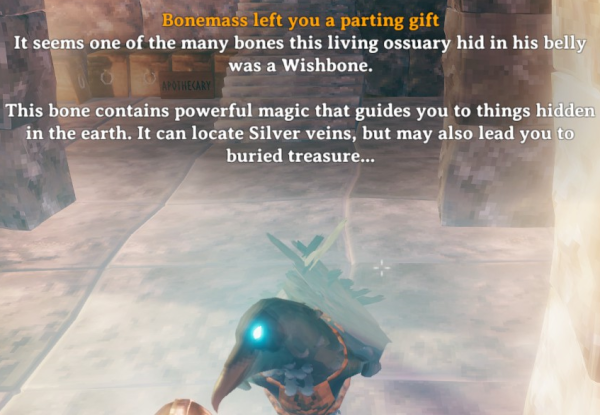 He happened to have three in his gut

You need one up in the mountains to find buried silver nodes to mine… unless you luck out and find an exposed one like I did… though we would need many more to gear ourselves up again.

We then hung up the Bonemass on the correct stone.

The Bonemass outline was kind of the clue

That unlocked a new power for us to summon.

I hope that blunt is good versus stone golems.  There is an issue there I’ll get to later.

Another boss down, and it was easy enough that the next day, when Unna was on with Fergorin and I, we went back and did it all again.

Up on a platform again

Of course, it was probably easy because of all the work that went into setting it up.  The more you sweat in practice and all that.  He did actually manage to throw a couple of blobs up to my platform on the second fight, but with the poison resist mead up and my mace to hand, they didn’t last long.  I just had to be careful not to knock out and of the boards I was standing on.

So we had now mastered the swamps, having looted crypts, farmed tons of iron, and defeated the swamp boss.  It was time for a change of scenery.  It was time to finally ascend into the mountains.