In looking through posts for the usual month in review summary I saw that we had just passed the ten year anniversary of our purchasing a PlayStation 3. 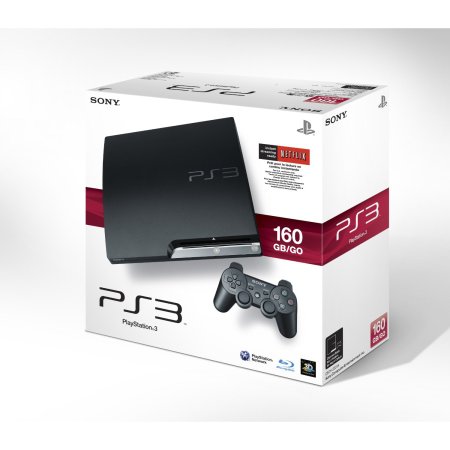 Just in case you wanted to see a box

A decade down the road… or about half an Afghan war later… the PlayStation 3 is still in the entertainment center under our televisions.  Same TV, same PlayStation 3.

We were a bit late to the PS3 party.  The platform launched back in late 2006 and was discontinued in the US back in 2016.  But back in 2006 we were more keen to jump on board with the Wii.  And I think it was probably the wise decision.  With our then young daughter in the house, the Wii was a lot more kid friendly.

The new TV was the primary driver for the PS3 purchase.  Our old 32″ CRT TV,  purchased back in 1998, was in the process of giving up the ghost so we finally bought a 46″ LCD HD TV.  With that we wanted to be able to watch Blu-Ray movies, stream, and play video games in actual HD resolutions, so a PS3 was already on my mind.  (Also, Potshot bought one and it seemed to work out for him.)

Anyway, we ended up doing some of all of that… once the PlayStation Network was up and running again.  The damn thing got hacked and brought down about a week after I bought the PS3 and remained down for over three weeks.  I was offered 450 Station Cash for my trouble as a result of a class action lawsuit, which tells you why I hate class action lawsuits.

For a long stretch we watched movies and streamed Netflix on the device.  Video games were played as well, though not as much as I thought would.  As it turned out, one of the oddities of the Wii, that you had half a controller to hold in each hand, was ergonomic brilliance.  Having to go to the “gamer grip” on a traditional controller made various parts of me ache.

Still, we did get through some of the TellTale LEGO titles, which were visually much better on the PS3 than the Wii, and my daughter put a lot of time into Little Big Planet.  But the last console video game we played on the TV in the family room was Just Dance 5 on the Wii, and the Wii has been packed up and stored away for about two years now.  The Wii was just more fun.

But the PS3 had other jobs.  We still used it for streaming and playing movies.  But the end of support for the platform still loomed.  Back in late 2019 we found that the streaming services had stopped updating their apps for the PS3, which ended its life for that function.  I went out and bought a Roku Stick, which now fulfills that need.

Then came the pandemic, and the television was suddenly getting more use than ever.  The Roku Stick purchase was just in time.  Within two month of that we had the pandemic, and Tiger King, and a hunger for video content.

Oddly, here is something we haven’t done in the pandemic: Watch movies on DVD or Blu-Ray.  We have a shelf full of them.  But streaming services seemed to have finally hit the point where they could scratch the itch that those disks were meant to cover.  That doesn’t mean I am tossing them, but when I am going through looking for something to watch, I am often struck by the overlap between movies available on services and our own library.  I mean, you get all of Star Wars and The Simpsons with Disney+.

So I haven’t spun up the PS3 in almost a year I would guess.  I think the last thing I watched was a couple of episodes of World at War, which I have on DVD and which doesn’t pop up on streaming services.  And that made me grouse a bit about how poorly black and white is rendered on modern AV equipment.  The glow of the CRT gave it a life that LCD technology lacks.

And so the PS3 sits on the bottom shelf of the entertainment center, half hidden in the darkness, waiting for us to want to spin a disk rather than stream.  Maybe some evening if the internet goes down we’ll boot it back up.

Recently I read that Sony will soon be shutting down PlayStation Store support for the PS3, which has made some grumble.  I am honestly surprised it has lasted this long, what with the PlayStation 5 out.  Nintendo pulled down all such support for the Wii ages ago, well before they launched the Switch.

And I am not that concerned.  The games I have will likely still work as I bought them all on disk and support for streaming apps and the like was already a dead end.   Of course, now there is a looming bug that might render the console useless if the CMOS battery dies, but I would have to feel the need to boot the system up to see if that was even a problem for us.

Overall, a decade later, I’d rate the purchase of the PS3 as probably worthwhile.  It did not get nearly the play time that the Wii did but it filled the gap in other places even if it was something of a “sledgehammer vs mosquito” level solution for some of its uses.  It played our Blu-Ray disks and streamed Netflix and HBO for us.  I’m not keen to replace it with something more modern.  There is no PS5 purchase looming in our future.  I don’t play video games on the TV and the streaming function has already been taken over by the Roku.  And, for now, the PS3 can handle and DVD or Blu-Ray needs.

Addendum: Sony has changed their mind and is keeping the PS3 and PS Vita stores open for now.  Maybe they’ll even push an update to fix the CMOS battery bug.