Blizzard announced today that they will not be hosting the annual BlizzCon event again this year.  Instead they will have another BlizzConline with additional events early in 2022.

As with last year, uncertainty around the pandemic at the long lead time for planning such an event has been given as the reasons for not holding the huge, in person affair.  I suspect the cost of such an event and the relative success of the online (and completely free) BlizzConline back in February also played into this decision.

Personally, I am fine with the online only event, especially since all the panels were just put up on YouTube to be viewed at your leisure, but I know that many, both fans and people at Blizzard, enjoy the big get together at the Anaheim Convention Center.  Speaking before thousands of cheering fans… and being in that crowd… is not something that can be reproduced with an online experience.

The message from Blizzard:

I hope you’re all staying safe and well. As guidelines in California around in-person gatherings continue to evolve and the status of the pandemic fluctuates around the globe, the teams across Blizzard have been discussing what this means for one of the events we miss the most: BlizzCon. We know some of you might be wondering about your own plans to potentially cross the country—not to mention oceans—and meet your friends, family, and fellow community members in California, so today, we wanted to give you a heads-up that we’ve decided we will not be holding BlizzCon this year.

Building an in-person BlizzCon is an epic and complex affair that takes many months of preparation—not just for us, but also for the many talented production partners, esports pros, hosts, entertainers, artists, and other collaborators we team up with locally and globally to put all of the pieces together. The ongoing complexities and uncertainties of the pandemic have impacted our ability to properly move forward on many of these fronts, and ultimately we’re now past the point where we’d be able to develop the kind of event we’d want to create for you in November.

But we don’t want to let too long go by before we connect with everyone again. So in the meantime, we’re planning a global event for the early part of next year, combining an online show along the lines of our recent BlizzConline with smaller in-person gatherings, and we’ll share more as our plans come together.

We very much look forward to celebrating with you all again. Until then, we’ll see you in Azeroth, Outland, Sanctuary, and all the other worlds we call home.

The pattern of operations has hit something of a predictable routine.  With the vulnerability windows of the O-EIMK constellation set to USTZ and the ADMs at or close to maximum, both sides start to ping for people around 00:00 UTC and, if a battle is going to happen, it happens in the next couple of hours.  There has been, for several nights running, an Azbel coming out of deployment to fight over, and last night was no exception.

Yesterday PAPI did a surprise change and formed up in China/AU time to drop another pair of Azbesl, one with a name about the “3-D invasion starts now” but trading about even with our defense even though they had almost double the numbers according to the battle report.

As a follow up they came back again last night to defend and older Azbel that was set to try and anchor.  The ping for an Eagle fleet went up first at our end and I once again joined in an Eagle and a Scythe logi on my alt.  We got into 3-DMQT and, as PAPI assembled, got ourselves positioned around the gate.  A second fleet of Munnins was called up, and carriers were arrayed on the Fortizar near the gate, their fighters off a ways from us.

Then the word came that PAPI was undocking.  Abaddons would be coming our way, a new doctrine for them, along with Munnins of their own, as well as Harpies, their doctrine for taking our our carrier fighters.

We sat on the gate and waited, then there was a gate flash and local started rising and it was clear they were coming through.  Some unfortunate Abaddon pilot decloaked from the gate jump early and was promptly devoured by our Eagles.

Then they started all decloaking and things settled into a brawl on the gate, with the Eagles shooting Abaddons and their logi while PAPI focused largely on our own logi.  I have few decent screen shots from the fight because I had turned down my graphic settings and, with that change, the mass of bubbles around the gate became largely opaque.  I mostly stayed zoomed out to avoid the bright screen white-out of being in the bubbles. 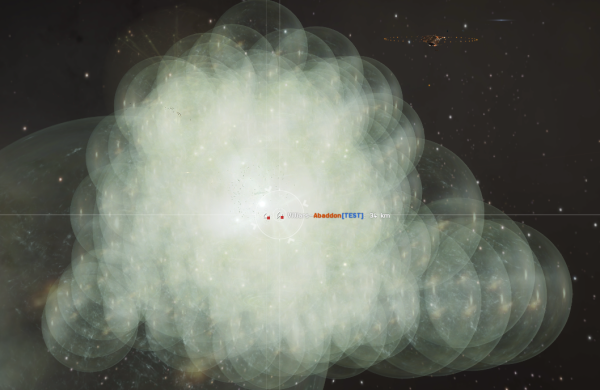 My view of most of the battle

We lost a lot of our logi, though the Eagles run with cheap T1 cruiser logi, so they were easily replaced.  My own Scythe managed to survive largely because I got focused on my Eagle and keeping an Abaddon scrammed, so when our logi anchor went down my alt flew off in a straight line away from the fight.

There he got ECM’d by a couple of PAPI Kitsunes, which meant he couldn’t lock up and rep anybody anyway.  But, with the ECM nerf from a couple of years back you can always lock the ship hitting you with ECM, so I dropped the combat drones I had brought along and put them on one Kitsune, then another.  Somebody else came along and finished them off, but my alt got on both the kill mails.  His fighters, left on their own, also found a PAPI Eagle to attack later on.

In the brawl I managed to avoid being the primary and kept on locking and firing.  Then the word came that things were going so badly for PAPI that they were attempting to de-aggress and get back through the gate, the fight never having really moved off to the Azbel, the ostensible reason for the fight.

With that word coming down, the focus at our end was to blow as many ships up as we could before we they got away.  HAW dreads were jumped into the melee on the gate, adding to the faxes we already had with us for support.

Final frenzy at the gate

And then the last few targets were gone and we had the field to ourselves.  The battle report showed that their plan with the Abaddons did not turn out the way that they had hoped.

As we waited for the vulnerability timers to run down for the system, the point at which operations generally each evening, we helped the faxes and dreads out of the gate bubbles by bumping them to speed them up.

Things went very much our way. 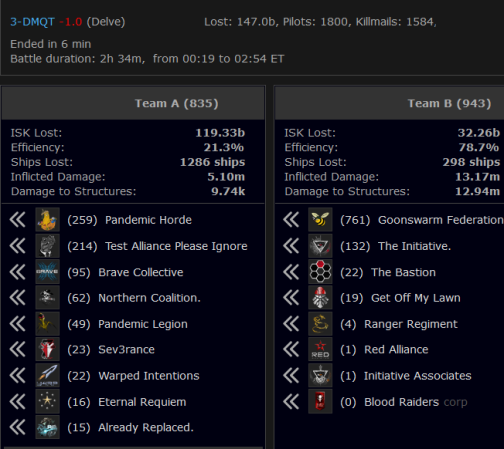 150 billion ISK isn’t a very large battle for this war, though at any other time it might have been noteworthy.

According to the details at the EVE Fleet Manager battle report, PAPI lost 98 of the 119 battleships that were engaged, all of which are more expensive to manufacture now due to the industry changes, along with 307 assault frigates, their anti-fighter Harpy fleet, and a good 30 heavy assault cruisers and 42 logi.  My killboard has three expensive Bhaalgorns on the list of hostiles I hit.

Our biggest loss was 70 heavy assault cruisers, largely from the Eagle fleet I was in, and 57 light fighters.  Oddly, none of the anchored bubbles on the gate died.