We’re about to turn the corner and head on into a full year of war.  Just one more week to go.

There were preparations for war going on as the Imperium pulled in forces and structures and got itself ready for the coming fight.  And, of course, the propaganda machine started cranking up, calling out the attackers for the blue donut coalition they were even before the attack began.

Also, we finally got character logoff.

Next week I’ll start a new “One Year Ago” section in the weekly post with links out to the wider coverage of the war.

The stalemate that is the Siege of 1DQ carried on for another week, with PAPI making no serious attacks on the remaining Imperium constellation in Delve.  My map fragment from May 2nd remains accurate.

Combat in the region consisted of skirmishes and hot drops.  Legacy seems to be getting sensitive to the Imperium pinging for bombers.

PAPI did come through into 3-DMQT with a large fleet at one point and word went out that they had EDENCOM Skybreakers included, but hopes that we might be facing a meme fleet offensive proved false.  There were only five mixed in with a mostly Svipul fleet composition.  Five does not a meme fleet make.  They tried this again on Saturday with a few more EDENCOM ships with similarly bad results. (Late addition: Now this was a meme fleet coming into 1DQ.)

Vily did say on the Legacy town hall that they were indeed planning to try and camp all twelve systems in NPC Delve in order to interdict the Imperium supply chain. 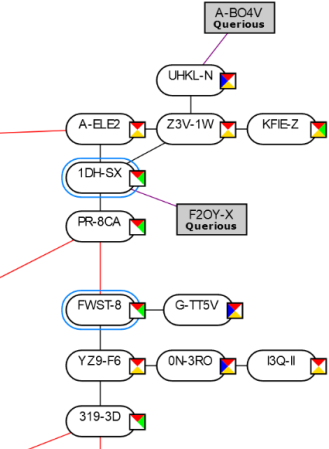 The structures are in place, they just need to actually commit to the task.  Otherwise Delve was not exactly the hot spot it was just a few weeks back.  It

There is a rumor that PAPI splurged and spent some of its ISK reserves on mercenaries to come in and help break the stalemate in Delve.  We shall see how that plays out.  They were supposed to attack this past weekend, but PAPI told everybody about the plan which meant we knew and would be ready, and they seem to have figured out that jumping into prepared defensive positions is a costly idea.

Overall, while little changed in Delve, there was more fighting than last week according to the campaign data. 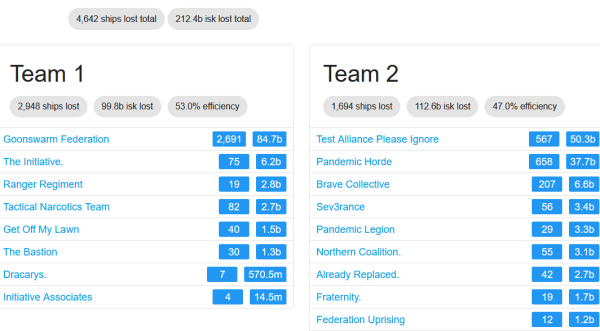 While the value of losses wasn’t much more, the total ships and capsules destroyed was up by nearly two thousand.  Cheaper ships were expended.  You can see what the Imperium has been up to as stealth bombers were the hulls most lost by them over the course of the week. (Also, I took that screen shot a bit early, but if you go to the link you can see the final weekly numbers.)

The Bastion has finally been evicted from the corner of Esoteria where they have been holding out since Week 14 of the war.  A hell of a run.  The Army of Mango Alliance has taken the last ihub from The Bastion and is besieging their remaining structures. 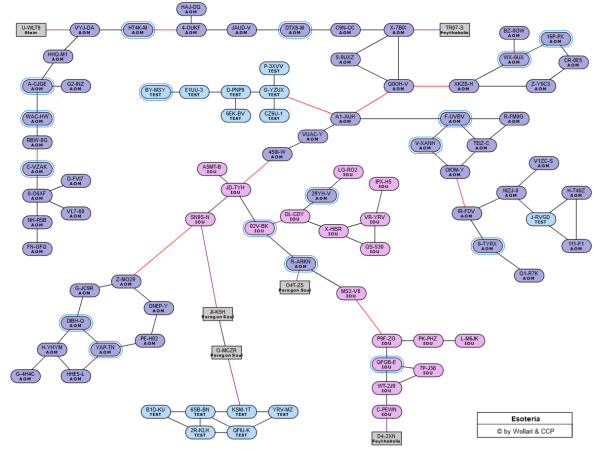 Likewise, the tide has rolled against the Imperium in Feythabolis, where the Russian FI.RE coalition and Army of Mango Alliance have been rolling back Imperium gains.

Red Alliance remains up in the northwest corner.  They are Imperium allies, having defected from PAPI back in week 17.  But they are not in the Imperium, having gone to work with the Stain Russians, so they may be secure in their corner.

And then there has been some activity in Catch, once home to several Legacy alliances including Brave.  Severance and Siege Green have been coming up the path from Querious to attack space currently held by Imperium member Dracarys.

I do not know if this is Legacy trying to simply push back the Impeirum from Querious or a serious attempt to retake the region.  Legacy does still have a couple of Keepstars in Catch.

As has become something of the norm, most action in Delve has been on demand, where you have to be ready to login and go on very short notice to participate.  Still, I managed to get in on one good bomber drop where we toasted quite a few PAPI Caracals and helped reinforce one of their Ansiblex jump gates.

Purifier on the job

That put me on another 48 kill mails, moving me a bit closer to my goal of being on 5,000 before the end of August.  We’ll ignore the blues that got hit… most of the kill mails were PAPI.

I also lost my Purifier on our last bomb run.  I didn’t even have a bomb at that point, but went along to spread the enemy’s attention and, since no good deed goes unpunished, was tackled and blown up.  So I filed for SRP and bought a new bomber.  And then I lost that bomber on a later op, another SRP claim another bomber acquired.   So my losses for the war total up to:

The results of the CSM16 elections were announced.  The results were not particularly surprising.  Some people are mad about them, but for the usual reasons.  Large organized groups get candidates elected.  So we got to hear the usual complaints and demands that CCP rig the system so this person or that can win, as though electing a focus group through a popularity contest was a good idea.  It wasn’t in 2008, it isn’t now.

We also got the Black Ops update from CCP.  And the Monthly Economic Report for May showed up as well.  Something about that here tomorrow.

Overall a loud slice of the community seems to be upset at CCP with their new monetization ideas, the state of the in-game economy, the CSM elections, the way the war in Delve has petered out topping the list of complaints, and have been pointing at the PCU as proof that CCP has dropped the ball. (example of very mad person post that is mad about everything)  In response the usual Pollyannas have said the PCU isn’t a valid measurement and anyway this is just the usual summer lull, nothing to see here, go on about your business, everything will rebound come autumn.

Unfortunately, the only way to find out who is right is to wait it out and see if things do bounce back.  But either way, the weekly PCU still seems to be sagging, with another week where cracking the 25K mark was the exception, not the rule: