Yesterday saw the arrival of two more legendary servers to the LOTRO lineup, joining the late-2018 Anor server (and the memory of the since closed Ithil server).  Named Shadowfax and Treebeard, they are supposed to offer players faster or slower progress through the tale of Middle-earth. 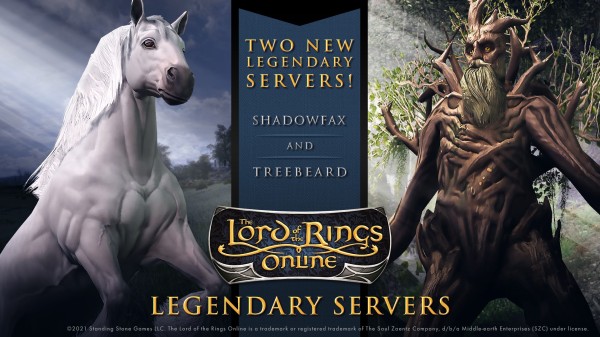 As to what “faster” or “slower” progress actually means, SSG waited until launch day to tell us what that even meant.  Over on their newly updated legendary page the differences are laid out:

I am curious as to how fast this will get you through the content.  I suspect that it won’t be the LOTRO Epic Storyline server idea that I suggested back in January, but it is getting there I suppose.

I will be interested to see which of the two servers ends up being more popular, but my money is on Shadowfax.

The Anor server also offered a slower XP experience in order to keep players from outrunning zone quest content before they finished, and that worked quite well.  And I would be more confident in Treebeard if SSG indicated how close to the Anor XP curve it was, but SSG has not yet been forthcoming.  Just saying “slow” seems likely to put players off as we saw with one of the EverQuest special servers.  Certainly people who want to get to raids or other end of expansion content will favor Shadowfax, and that crowd tends to be made up of some of the most dedicated supporters of these sorts of servers.

In addition the two new servers are getting the new “landscape difficulty” option which, to my surprise, has nothing to do with hedge trimming.  I thought surely this was a hobbit gaffer challenge mode.

Instead it lets you set how dangerous mobs are out in the world. 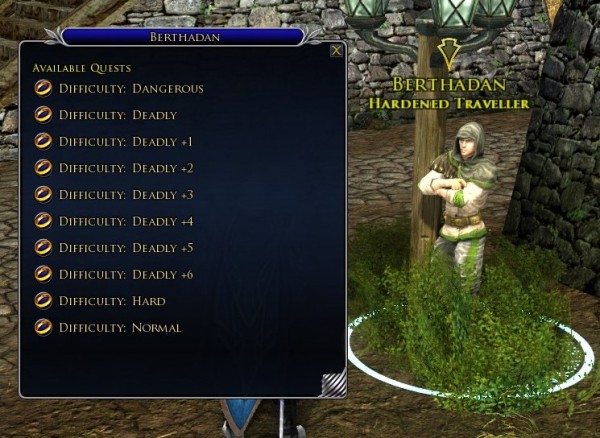 Sorted alphabetically because programming is hard

The settings, which I believe go Normal, Hard, Dangerous, then the Deadly range, will offer benefits, boosting XP by 10% to 20% and virtue XP by 1% to 5%.  In addition, those who boost their difficulty to Hard+ before level 11 and stick with that difficulty will earn special titles at levels 50 and 130, and those who do the same at Deadly+ will receive additional titles at those levels to commemorate their achievement.

As for how hard is “hard,” some players did an analysis of the feature when it was on the test server.  In order to allow players with different settings to play together, the impact of the settings adjusts how much damage you take and deliver.  The analysis linked above show that with the maximum Deadly +6 setting your damage output is throttled to less than 17% of normal while boosting incoming damage 9x.  From the forums:

The difficulty mostly works by making you more vulnerable to monster attacks, and reducing your damage – so that it won’t interact too badly when other players who may not be at the same difficulty are present.

There are a few enrage buffs that you can trigger on an enemy when you are in higher difficulties that other players would notice, but these shouldn’t be too much of a hindrance for players running around at normal difficulty even if they do encounter them directly.

In 3+ group instances difficulty is disabled for all participants, as we assume that most of the time you’d be upping the instance difficulty tier for a harder challenge, and we don’t want to make it hard for players with different personal difficulty settings to do group instances together.

While SSG has been hinting about the idea of a LOTRO “classic” server… or at least no longer completely rejecting, which is the same thing to some players in that “so you’re saying I have a chance” level of logic…  in the vein of WoW Classic, the LOTRO Legendary servers are not that.

The Legendary servers have reduced cash shop options, but are otherwise mostly feature aligned with the normal live servers, which means you can play classes or races that were not there at launch and the whole talent tree update from a few years back is part of the mix.

Legendary servers are more akin to fresh start servers with some special rules which unlock content as time goes by.  This isn’t necessarily a bad thing.  I found the Anor experience quite enjoyable.  Just don’t kid yourself about what you are getting.

And, as usual, in order to play on Shadowfax or Treebeard you will have to have a VIP subscription or be a VIP lifetime member.

Anyway, the servers appear to be up and active. 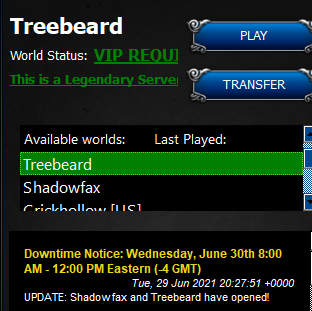 I won’t be joining in this time around.  As much as I enjoyed the Anor experience, that was still fairly recent for me.  I am also pretty invested in WoW Classic at the moment as well.  And then there is my big monitor, which makes playing LOTRO an exercise in eye strain.  The minimal UI scaling they have is pretty bad.  Making things bigger also makes them blurry and pixelated.  So while I support the effort, I will watch from the sidelines.