Yesterday somebody triggered me on one of my most/least favorite hobby horse discussions, that of immersion.  Sometimes I think I have grown enough over the years to not get wrapped up in online arguments about such things, but apparently immersion is not on that list yet.

This time the immersion argument brewed up as one of the objections to CCP’s pop-up advertisement in EVE Online that comes when you lose a ship, encouraging the player to buy some PLEX so they can purchase a replacement ship.  This has led some anger… erm, some additional anger, because there is always anger… in the community. 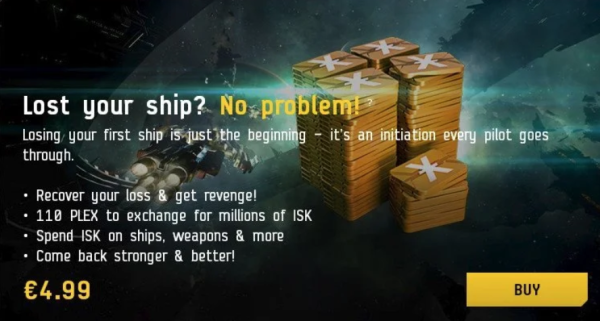 Use your credit card to finance your revenge!

This led to any number of reactions, including the dead idea of returning to a subscription model, as well as any number or arguments about why this pop-up pushes the line in way that past monetization of the game has not.  Immersion features in some of those arguments as the pop-up comes during combat when you lose a ship, which puts it in a new category for some.

Sending players to the out of game website cash shop to spend real world money crosses an immersion line for some.

Enter Pollyanna, done explaining that the PCU drop is normal and nothing to worry about, who followed up to argue that immersion is a strictly definable thing, the same for everybody, and that this pop-up does not break immersion because PLEX exists, pop-ups exist, and links that take you out of game exist.

And there you have me triggered and engaging in a fruitless online argument.  I mean, they’re almost all fruitless, but I live in hope as 1 in 100 or so actually end up with some mutual understanding.  Not this time.

It probably took me a bit too long to figure out that Pollyanna didn’t give two fetid dingoes kidneys about immersion, that they were just there to defend CCP with religious fervor.  So I packed that up, muted the whole thread… thank you for that feature Twitter… and decided to write again about immersion.

The main problem is defining what immersion is, or if it is even a thing at all.  I add that last bit because I have had people argue that immersion is literally impossible, though those arguments often seem to assign an unrealistic definition to it.

So let me dispense with the “there is no immersion” side of the argument by saying that it isn’t an absolute belief that the game is real and you’re a part of it.  If that is the definition to which you are wedded, then there is no immersion.  But I am going to say that I both believe immersion is a thing and that I have never once literally believed I was in New Eden or Azeroth or Norrath or any other video game location.

Immersion is more like a release of the real world, the entering of something like a hypnotic focus on the game and its mechanics, becoming briefly one with the game, reacting at some level like the game is real even if you simultaneously know at a more logical part of your brain that you are simply playing a game.

Examples of this from my own personal experience include the rush of elation on defeating a difficult boss, the sudden boost in heart rate when you jump through a gate and find a camp on the other side, or the real knot in your stomach as you reach a cliff and see how high up you are.  These are all physiological reactions that indicate that some part of your brain believes what your doing in a video game is real.  That is immersion.

And, seriously, if you say you have never experienced anything like that I am going to have to ask why you even play video games.  That is the runner’s high, the payoff, the rare moment that makes the effort worth it.

Sometimes immersion is more subtle.  There can be what I have heard called a “competence high,” where you’re just doing very well at something like a simple match 3 game, where the moves are all coming to you and the game is totally going your way that qualifies to my mind.  Inventory management can even be like that.

The thing is that immersion isn’t a constant or reliable.  Sometimes you go through a gate and there is a camp on the other side and it is just another thing in the game.  Not every high place makes you feel a bit of acrophobia.  Not every boss fight, even difficult ones, give you a rush.

I have, in the past, likened being immersed to falling asleep.  I cannot explain how either happens.  There is just generally a point in time where sleep or immersion is not a thing, and then it is.

Now, you can certainly ask whether the people who are making the immersion argument really mean it or are just throwing that out there.  It is fair to question them.  Have they even seen the pop up?  (I haven’t) Were they in a state of immersion when the it came up?  Has immersion even been something they have mentioned as important in the past?

But if your counter to the immersion argument is that we all know what PLEX is in our logical brain, that the game has a pop up when log in, or that something like EVE Academy has a link that takes you outside of the game, so this pop up could not possible break your immersion, then I am going to suggest that you don’t know what immersion is or that you are arguing in bad faith because defending CCP is more important that whatever may or may not be immersion breaking to other people.  You certainly don’t get to arbitrarily define what immersion is and dictate what does and does not break it.

Anyway, thank you for listening to my TED Talk and/or my thousand word sub-tweet!

15 thoughts on “On Immersion”