While we spent much of the week waiting for PAPI to prepare for the coming onslaught on the Imperium capitol, a true hero of the PAPI coalition emerged in the form of one Syrio Ikunen of TEST who managed to launch an electron bomb from their Purifier that caught a John Hartley Kestrel fleet dead on, destroying 119 Kestrels and two support ships in one go.

They were not the only attacker on the battle report, but their bomb was the most spot on and a majority of the Kestrels blown up were marked as solo kills attributed to them.  That Purifier has a lot of kill marks on it now.

Who got all the kills?

XtraSquishy captured a bit of the bomb run on video.

I am actually kind of bummed I missed that because I had one of those Kestrels sitting in my hangar waiting to get used. (I have now named it “Syrio Ikunen Target.”)  They’re zippy fun to fly around, but clearly they are a bit thin on the tank end of things.

CCP did some updates to command ships, though I couldn’t tell you if that changed anything.

In the war I was out on a fleet in Paragon Soul with Dabigredboat chasing TEST dreadnoughts.

And in my summary of week four of the war it looked like 10 trillion in ISK had been destroyed so far, split fairly evenly between the sides.  Fraternity and PanFam had broken into Fountain and we were falling back.  Legacy was deep into Querious.

Since this was just move op and re-subscribe week for PAPI, the strategic situation in Delve did not change, so I can once again re-roll the same image of the front lines.

The expectation, given the PAPI announcement last week, was that, come the weekend, things would heat up, that the actual assault on 1DQ1-A would begin.  And it seemed for the briefest of moments that this was going to come to pass.

As I got up and got online Friday morning I opened up Jabber and there were pings about hostiles in 1DQ.  I logged in, but all the fleets were full, so I undocked in a Kestrel to see if I could get a shot in on something.  I managed to get missiles away on one target before it blew up… my one kill mail in 1DQ for the week… before the whole thing was over.

But it wasn’t even a real attack on us.  Some Imperium pilot in a Nyx warped into a bubble and PAPI tried to take advantage, as we would in a similar situation.  It was just another minor skirmish in a week that was mostly minor skirmishes.  The weekend saw no assault, and every time PAPI pinged for a fleet we stood to with a counter and they declined to come to us.

There have been rumors of move ops heading away from Delve, rumors of structures being unanchored, and somebody noted that there were a number of titans for sale in the T5ZI Keepstar, the Tower of Legends as it has been named, just across the way from the Forge of Heroes Sotiyo, but there has been no official announcement that PAPI has called off the assault on 1DQ yet.  Even some PAPI members are getting tired of their inability to commit.

Meanwhile, the NPC Delve interdiction campaign, aimed at cutting off 1DQ from the rest of New Eden petered out when Imperium pilots shot up the first few bubbles deployed to the NPC station undocks.  Nobody seemed interested in maintaining the watch on 11 different camps.

As for the weekly Delve campaign report, numbers were up again as the Imperium prodded PAPI and shot structures and generally tried to be a pain. 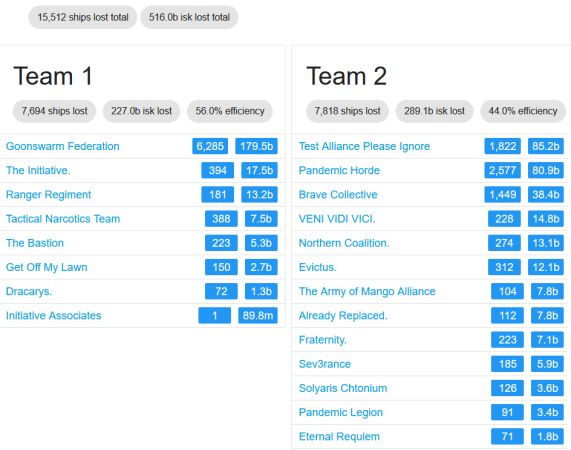 So there were a half a trillion in ISK in destruction, and that doesn’t even count all the clashes in E-VKJV, because that system is in Querious.

Do we care at this point?  Something might be happening in Feythabolis, but no ihubs have changed hands.  Likewise, whatever was going on in Catch appears to have tapered off.  All eyes were supposed to be on Delve.

Really, the only interesting bit was Snuffed Out baiting Fraternity into another fight in the northeast.

After hitting the 5K kill mail mark last week I was able to go back to flying logi… and promptly lost a Scalpel in a skirmish in E-VKJV between an Imperium Harpy fleet and PAPI Retributions.

I also lost an Eagle late on Friday night when we went into E-VKJV to reinforce the Ansiblex jump gate there to make any attempt to go around the back on Saturday, when we expected that the assault might begin, a little more awkward. 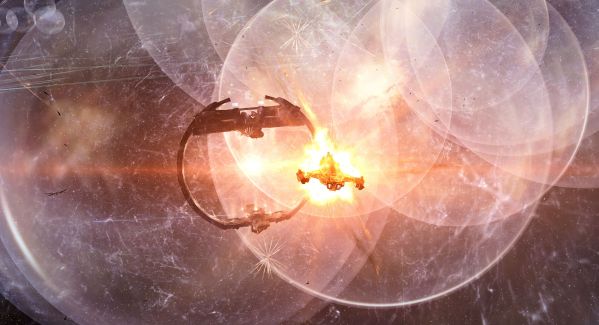 Given the lateness of the hour, I was surprised how on the ball the reimbursement team was.  I got my payout in under a minute. 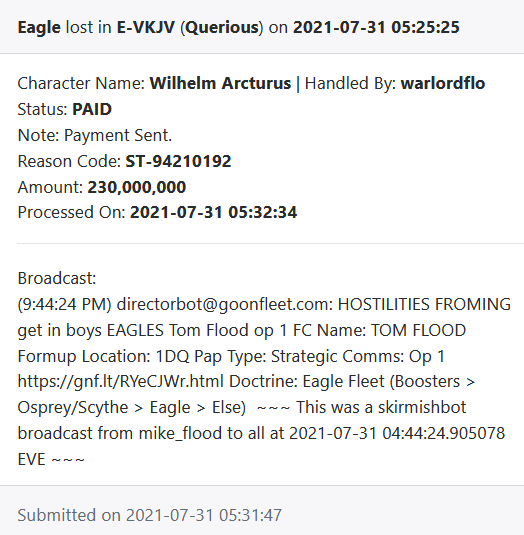 Eagle loss paid out 47 seconds after being submitted

I am pretty sure this is becoming a point of pride for the Imperium after we keep hearing that some PAPI line members wait for weeks to get something.

I was actually fairly active as we went to visit PAPI in their space multiple times.  I was there in a Scalpel, an Eagle, a Ferox, a Kestrel (long after the fleet mentioned at the top of the post), and at one point we took a wormhole out to Insmother to try and nab a capital, but were too late so we caught a Thera connection back to Fountain and gated through T5ZI without incident.

As a measure of the tide of the war, I was on 98 kill mails in week 56 and only one of them was in the pocked of space the Imperium still holds.  We spent a lot of time poking PAPI.

Anyway, the two losses above bring my total loss count for the war to:

CCP dropped the expected Grand Heist patch on Tuesday, releasing the reserve bank keys into New Eden.  I hope we get some report later on about how much of that ISK gets harvested by the groups that own the systems they are in.

The Grand yet Slow Heist

The whole thing got off on a bit of an awkward foot as the low sec sites with the keys were broken when the update hit and it took CCP the rest of the week to get things corrected.  I think things are good now.

I wonder how this will influence the July MER?

They also reduced sales tax and broker’s fees in NPC structures by 50% for the next three months.  Again, I don’t think anybody is going to complain about making more money on market transactions, but I do wonder what the goal here is.  Are they trying to stimulate the economy, jump start production, or undercut the Tranquility Trading Tower in Perimeter?

The latter would be amusing for the Imperium.  Even if it wasn’t the intended effect, CCP made NPC stations cheaper to sell from if you have all the right skills, so a lot of trade moved from Perimeter to Jita.  While we get a 20% cut of the TTT, Pandemic Horde and TEST are much more dependent on it for income.

When it comes to the peak concurrent user number for the week, New Eden was up again.  No doubt the promise of a huge battle got people to peek in.  We’ll see how the failure of that to materialize affects numbers next week, but we saw the numbers pass 27K for the first time since week 49.